I’m new and investigating my requirements before getting hardware

I have a 13 zone setup with nad/ bluesound endpoints. I’m investigating being able to do room correction with convolutution for 11 of those zones and wondering if the i7 NUC will be able to handle that much simultaneous dsp?

Thanks. I’ve tried to search but just interested in people’s experiences.

the i7 NUC is quite noisy with the fan running at med-high loads so this might be a consideration. I personally found that running the Server on Windows i7-7700 in fanless chassis was perhaps a better bet - but 13 zones is quite a lot to be doing convolution on simultaneously.

You might find that ROCK will work on a non NUC setup (I use one to play with that is i5-6500) and it works fine too…but unsupported. Linux is another option should be handy in that side of things.

Noise is not so much of an issue as the computer will be in a server room not a living area.

The nuc is convenient because rock willl run on it with ease so I’m basically weighing that up versus a more powerful CPU etc running Linux but that’s obviously a bit more work to setup.

Like you said 13 zones is quite a few for convolution

If you intend to do DSP at DSD sample rates then it will be sticky. At PCM rates I think you will be OK with an i7 NUC.

Maybe illl get the i7 nuc and see. I could always repurpose the nuc as a kodi box if I need more for roon.

I have a one year old i5 Intel NUC running on Windows. Running an advanced convolution filter (room + speaker phase correction + x-talk cancellation + reverb tone correction) is done at CPU load x50 on a 44.1kHz stream. This falls down to x4 on a DSD stream, which requires a lot of resampling and sigma/delta conversions as well as convolution at 352kHz.

My guess is that you can run convolution safely over 11 zones at 44.1kHz with 16ktaps@44.1kHz/channel. Avoid upsampling (this is anyway usually without any effect on what you hear). If you stream DSD on more than 1 zone you could be in trouble.

Thanks. That helps a lot. Chances of me running all 13 zones at the same are pretty low. More likely 7-8 max and regularly 2-4 so seem like the nuc i7 will be fine

Using my i7 server and convolving 1 Zone without upsampling I get a Processing Speed of > 100x (display ceases at 99.9): 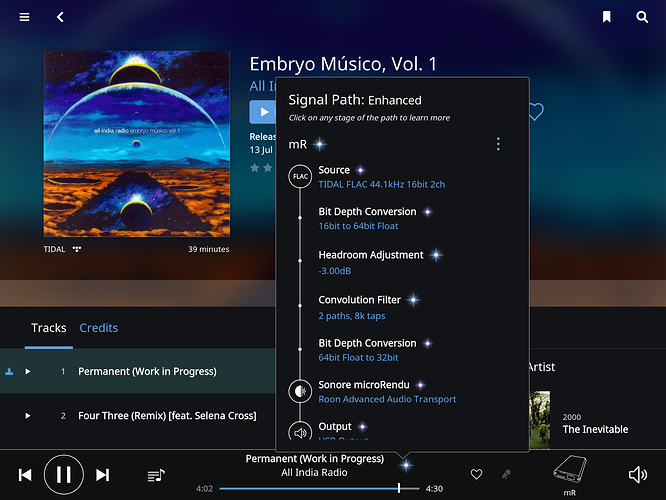 Adding upsampling to 352kHz drops that to 12x: 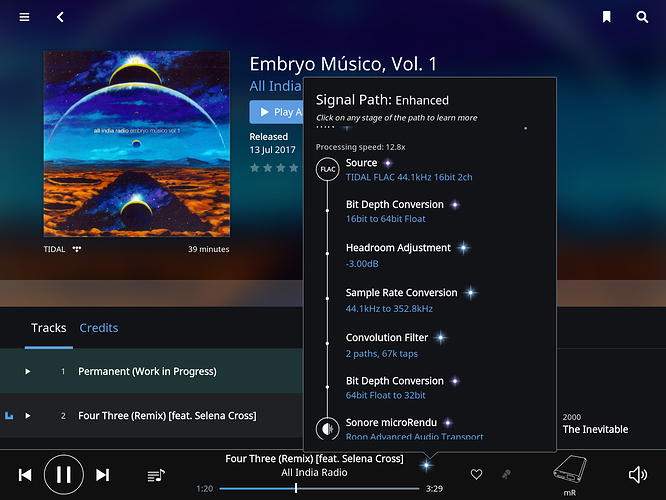 On that basis my guess is you’d be fine with an i7 7700 convolving into 13 zones without upsampling.

I’d suggest using a larger form factor and Windows 10 or Linux if it’s going into a server room. It might not be as simple as ROCK but you’ll get more fan control and monitoring, so you can check CPU load and temperatures directly.

HI Andy, your FIR filters are pretty short with 8k taps / 2 paths and I agree with you this is little computing time.
Mine are 16k taps / 4 paths and therefore 8 times more costly. I need the length to correct amplitude in a good way down to 40Hz, but if you don’t need to correct LF at high Q a couple of thousands tap is all you need indeed !

Kudos to Roon team by the way for significantly improving the efficiency of the convolution engine in one of the recent updates, it’s now as performant as the one of JRiver that I know well. And waaaaaay more easy to configure.
Only missing is the “auto normalise filter” feature to prevent clipping, one needs to adjust the headroom manually if not done at the filter generation stage. But that’s fine