Credits not carried through

Why is it that a credited person’s information is not carried through all the credits. For instance Bob Weir is credited with Vocals, Guitar, Lead Vocals, with a picture, and then later separately credited as a Primary Artist but has no picture? The album I am using for an example is Workingman’s Dead, but this happens all over the place.

My apologies for not getting to this question earlier. I love The Dead and I’m always happy to share a conversation about their music.

Probably, the short answer here to “why…” is that metadata emerges from a number of sources over a pretty wide span of time. With that there’s going to be variation in how data was applied to releases, and correspondingly, how it shows up. Music metadata doesn’t have hard and fast standards for uniformity and because of that there’s inconsistency.

So, if on the recent 50th Anniversary of Workingman’s Dead (which is amazing especially with the added Capitol Theatre '71 shows!) Bobby’s credits may be more rich (Vocals, Guitar, Lead Vocals) than say an older release which may only list Rhythm Guitar under his credits.

There are a number of cases where we can’t repurpose credits across multiple releases. For instance, Garcia played Pedal Steel Guitar on some early/mid period Dead albums but laid the instrument down after a few years. He returned to it later with David Grisman and Old and in the Way but if we were to have carried that metadata value across all Grateful Dead titles it would be inaccurate.

I hope this helps clarify a bit. As for Bobby’s photo in credits, do you have an example of his photo not being applied to his entry that you could share with me? I’d like to take a look at that and figure our what’s going on with that.

Since we’re talking The Dead. I highly recommend the latest reissue of Skull and Roses

The added disc is pretty great and loaded up with classic Pigpen.

I’ve also been digging on this one recently, it’s a great listen also! 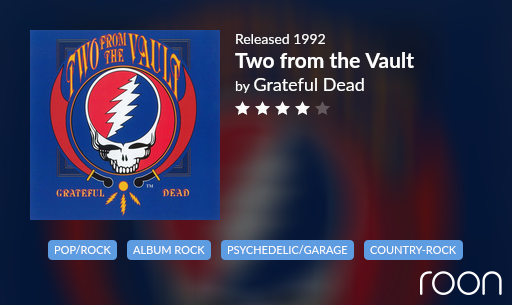 @jaimie thanks for responding, it seems that the metadata has “evolved” and now the specific example I gave Workingman’s Dead now has Bob’s pic everywhere it should be.

Thank you for following up with me on this. I’m glad that the pages you mentioned previously are now displaying a photo of Bobby!