There is a merge function available.

You will want to select the 3 albums with one song in each album (or is it 4 total to make a complete disc?), click edit and then merge. After that, you can repeat the procedure to merge the 5 complete albums into a set, if necessary.

More about it here.

See if that helps.

Bingo, that does it! That’s definitely made my day! Right clicking, definitely had not thought of that, but this should solve many problems with my library.

Since many box sets aren’t just collections of the original individually released albums, but also contain alternate versions of the originals and collections of unreleased songs and single B-sides, I would like to see a way to name the individual discs in a box set other than Disc 1 | Disc2 | Disc 3, etc. For example, the Jethro Tull compilation - “20 Years Of Jethro Tull: The Definitive Collection” has 3 individually named discs, and slightly different album art for each. So I would like to see: The Radio Archives And Rare Tracks | Flawed Gems And The Other Side Of Tull | The Essential Tull instead of Disc 1 | Disc 2 | Disc 3.

If that’s not possible due to UI constraints, then if different album art is provided for each disc, maybe Roon could pick up the art from the ID3 tags or images in the disc folder and then change the album art that is displayed as each disc is selected in turn. Like so: 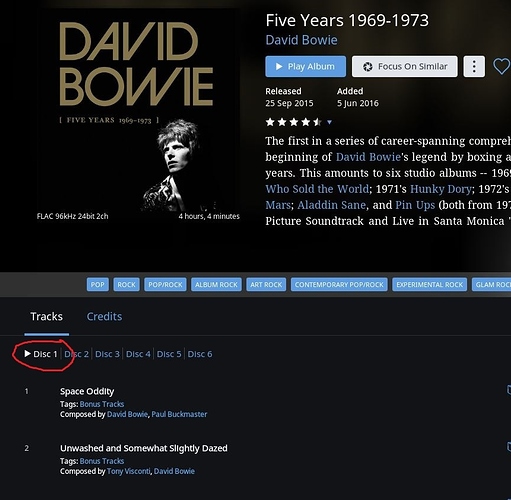 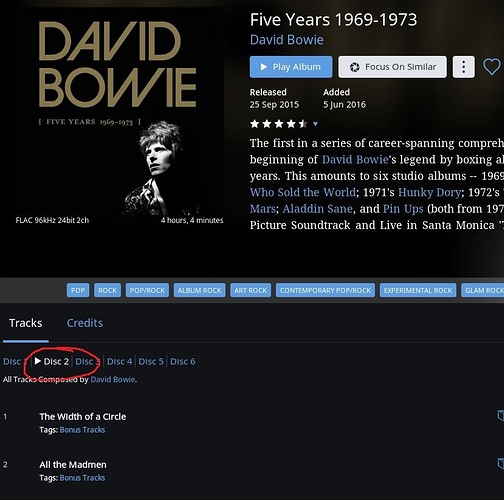 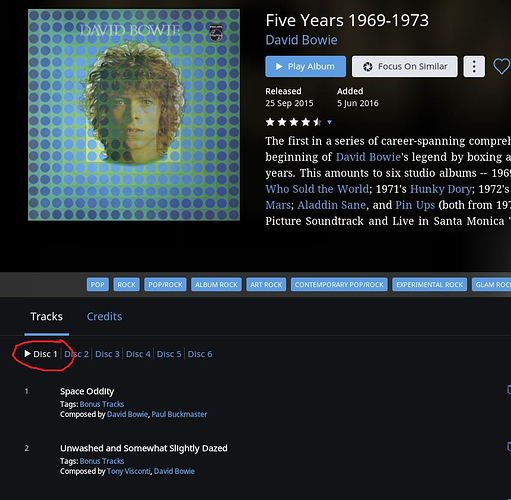 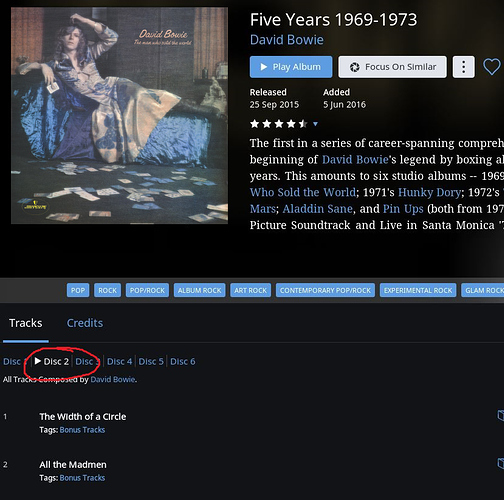 And I would probably like to see the box set cover art in the album and artist lists. Of course, this method is not to everyone’s liking, so the whole thing would have to be user-selectable.

In FLAC files that tag is called discsubtitle. Hopefully recognizing it and allowing distinct cover art per disc are incorporated in 1.3

I would love this. I haven’t dared import the Rubinstein 144-disc box set because it would be a nightmare to navigate. The box set reproduces all of the original album covers and they look beautiful; it’s a real shame you can’t get them to appear in Roon (unless of course you import them as separate, unrecognised albums and group them together with a tag - not ideal but a workaround).

I haven’t dared import the Rubinstein 144-disc box set because it would be a nightmare to navigate.

It is recognised by Roon though, as one big box. I only have three discs from it (I was able to buy them separately to add to the old Rubinstein box which I have) but they come up with full details and performance dates/locations.

I agree entirely that one needs the individual album covers, but for that box at least you can navigate quite well already.

I’m also trying to figure out a way to sort collection, anniversary and deluxe editions. As mentioned above the Steven Wilson remixes are a good example of when things get a bit messy. On these usually the album comes in different flavors - flat transfer, new remix, new remix multichannel etc. Currently I can sort them into different disc sets, so far so good, but then you have no idea which version you’re playing as all you see is “Disc 1”, “Disc 2” and so on.

Was there anything implemented in the more recent versions that would make this any easier?

Just want to get an idea from the devs if either of these feature requests are on the road map:

Roon’s handling of box sets remains a major irritant for me.

(EDIT)
NB: This has been a request ever since the 3rd quarter of 2015! We’re coming up on three years here guys!

I’ve made this request multiple times.

I wish we had an update from Roon on this.

Still no way to display DISCSUBTITLE field in Roon as of version 1.6 (Build 401)? I don’t understand why not? We can have every kind of display for the Queue/Now Playing screen, but lack, IMO, display of critical library information for choosing what to put in the Queue in the first place? Not cool.

Please let us know if this is on the roadmap or in the trash bin. We shouldn’t have to see Disc1, Disc2, etc. in box sets or multi-disc albums at this point in Roon’s development.

I have also been campaigning for this for a while. Better box set management is a must IMHO.

As long as roon is approaching this as waiting for better metadata from their providers, I doubt that this will ever happen. I still think that only a flexible approach will ever allow this to happen.

https://www.amazon.com/s?k=ZYX+Italo+Disco+Collection&ref=nb_sb_noss_2 has 26 boxsets each with 3 discs (some with 4). How do you thing that a list of 78 discs will look like interface wise? What I’ll like to see from a proper implemented collection manager is a single item in Albums view, called “ZYX Italo Disco Collection” for example, when I click on it to see the 26 boxes (each with her own art) when I click on a boxset to see what you see (Disc 1 | Disc 2 |Disc 3). Or any other variation on this implementation will work. It can somehow be achieved with TAGS but is not the best way and it’s a pity that a $500 software is constantly ignoring any improvement in this area…

I can’t count the number of times this has been requested, low priority I assume

I fixed it however, I manage and play anything over 10 discs in JRiver, heresay I know but there I get subtitles and individual album art and DNLA

I am still unconvinced on Roon for this alone !!!

I too have used JRiver to play large box sets. However, JRiver has another whole set of issues including the inability to upsample to DSD.

So, all we can do is keep asking. However, it is a shame that our comments appear to have fallen on deaf ears.