Is it possible to have multiple album covers within a box set? For example, I have the Beatles Mono box set. The entire set has the same album cover, even though all the different albums are contained within. It would be great to have the box with a the cover of the box set, then when clicking on each album within the set, each album has its own cover.

A very sensible suggestion. Others (including myself) have already requested various improvements to box set/collection handling. There are a number of relevant threads, for example:

It would be nice to see the metadata for individual albums that are now sold as boxed sets. I suppose this happens often with older albums, but look at Haitink’s recent Beethoven cycle. The CD’s were individually sold, and a few months later they appeared as a box.

I have done this with my Chris Rea ‘Blue Guitar’ 11 disc set. I manually scanned and added the relevant individual covers in my Sooloos days. These covers have been imported ok.
I can’t tell the individual titles from the browse screen though. I have to open them all up individually to get the one I want which is not ideal.
Chris

I have many sets that would benefit from this. One of the realities might be that the “cover by disc#” may have to be a manual edit as the web sources may not have the individual covers for auto loading.
Users that want this probably have the covers scanned or stored anyway so it shouldn’t be an issue.

+1 to the request. I have many so called “original album cover” sets which need this.

To give some background, I think one reason it’s not already in Roon is that Rovi doesn’t provide this metadata. What we see* in Roon is designed to make the most of Rovi metadata, and at the start they obviously won’t want to put features in which can’t be populated automatically.

However, this is a feature which really needs to come at some point, even if it is tied to a layer in Roon’s own metadata service, on top of the Rovi one. At some point not only the programming, but also the metadata (=covers) entry needs to be done.

The Beatles sets would be no bad start…

*I use the word “see” advisedly: there are already metadata fields which are not yet exposed (and which may or may not be populated). This means there could already be space in the database structure for the covers etc that we need. This doesn’t mean that it isn’t still a huge job of course.

My largest original album covers set is 71 discs (Glenn Gould, 2007 edition). And I have many smaller ones.

What we really need (as well as metadata editing in general), is the ability to have the option of an extra layer of sorting/grouping albums. This would likely be user-based, stored in the Roon database and not dependent on external sources.

This sorting of items could be into box sets, collections, series’s, or any other grouping that would be relevant to the user. The user could choose an image (box set cover, cover for the series, etc) to represent the grouping, which when selected would go into that particular group. All the items in that group could then still have their own covers and other artwork (if relevant). I understand that some box sets might be recognised by the database, so of course that compatibility would remain.

Personally, I have a lot of box sets that I would like to sort, though I also have many “series’s” - items that were not released together as a box set, though that form part of a bigger series. Of course these items could be grouped separately on the artist page - and there should be the option to do this - though grouping them together into a series would greatly tidy up the artist page and make for better organisation, in particular when there are large number of items.

I believe that this is currently one of the essential developments to the Roon software itself, second only to metadata editing and improved album art/liner notes handling (IMHO). Roon is already excellent but these things (amongst others) would really take Roon to a new level!

Yes, I’d add my support for an improvement in the way box sets are handled and a way to display multiple album covers. Sony in particular are putting out a lot of original album cover sets.

Yes pretty please with a cherry on top!

Those boxsets look horrible, with 50+ Disc links, you don’t even know what disc is what without looking at the actual box. Kinda defeats the purpose of ripping them.

Those boxsets look horrible, with 50+ Disc links, you don’t even know what disc is what without looking at the actual box. Kinda defeats the purpose of ripping them.

It’s a logical display, which we need, but in big boxes it’s pretty useless.

This is why I have requested an alternative Album/Artist Detail view which lists works in order of composer, so that browsing box sets makes some sense. (Ping to @brian to demonstrate the use case.) It’s under consideration.

I don’t know if this is possible in Roon, but MinimServer recognises the DISCSUBTITLE tag. I find this really useful for navigating box sets, as it can be set to the original title of each album that makes up the set.

This is definitely something I’d like to see. With the big classical box sets, this would be a needed feature

As an example, these are some of the disc subtitles I’ve used for the Stravinsky set (as they appear in JRiver). I included CD 1, etc., as part of the title as it made it easier to navigate in the Naim app, but I can imagine they wouldn’t be needed in Roon.

Yes! I’ve been meaning to bring this up as well (the most egregious recent example for me being the Bowie Five Years set as bought from HDTracks).

I note that JRiver presents these tracks as the six distinct contained albums, each with its own cover art.

In Roon, it took me awhile to figure out where those tracks had gone - I eventually realized they’d showed up with all 62 tracks filed under album title “PinUps”, but with the Aladdin Sane cover art, and the text “aka Space Oddity” randomly lurking below the sampling-rate info: 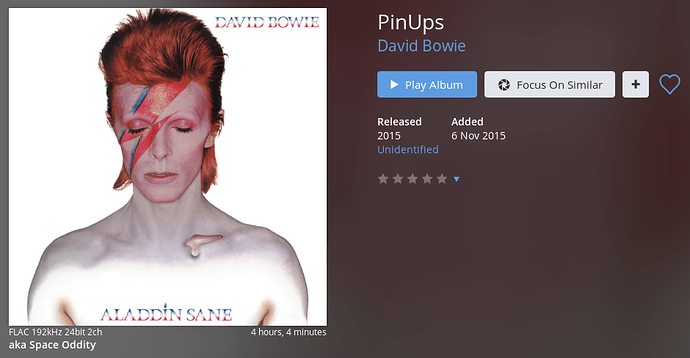 Now… it’d be great for Roon to in this case to present this collection as the six contained albums, but even if Roon showed the correct title and cover art for the Five Years collection, that would be a significant improvement on what’s happening now.

And… while I’d like for Roon to do something I like automatically, what are user best practices for wrenching things into a better state manually? Should I tweak the track tags and directory structure to make these look like the six original albums, in the hope that Roon will take that hint?

Can we expect that feature in the future from Roon?

I’m ripping the Decca Sounds Box Set right now. Please make it possible to use the right cover for each Album within the set.

Same here. The Itzhak Perlman Complete Warner could profit from this.

It’s really two things I’d like to see: the original covers when they existed (for those boxes that are complications of pre-existing albums) and a way to replace the disc 1/disc 2/etc labels to make navigation easier.

I must have at least a dozen boxes in my collection, and the majority are compilations of earlier single albums, but I did notice I don’t listen as much to them in Roon as I’d want simply because navigating them is hard.