It would be nice to see the metadata for individual albums that are now sold as boxed sets.

I suppose this happens often with older albums, but look at Haitink’s recent Beethoven cycle. The CD’s were individually sold, and a few months later they appeared as a box.

This has been requested before. It’s an important issue, for me too. I have many box sets and they are often, as you say, made up of albums. (Many means currently 189 containing 5 discs or more.)

I want a way of displaying as a box, or as the individual albums (with their covers). That Rovi doesn’t offer all these covers should not stop Roon from offering the feature.

I too have asked for this elsewhere.

Better handling of box sets or collections, with a main page for the collection, including the overall collection artwork and information, and then albums within that for the individual CDs or albums in that collection - each with their own title and artwork, if applicable.

Do the box set/standalone versions appear as alternative versions under the album cover ?

Edit: alternative versions can be chosen from the Identify Album screen. After an album is selected they are listed under the album cover.

+1
I am facing the rather extreme example of the Glenn Gould box just released which I purchased from Qobuz and that features… 73 CDs !
There is a nice booklet and all songs are recognized perfectly but it would be nice to get at least album covers for each of the CDs…
Chris

No. But what I find strange is they way CD’s are discovered. Brel discography is fairly easy compared to classical music so I use the 2013 box set as an example.

First time I did a discovery, it was detected as a box set.
Then I moved from a temperary to a full license and a new server and did a new discovery : on the same files and file structure, a couple of albums where discovered as ‘stand alone’ with there own metadata and reviews, and others were discovered as belonging to the box.

It is probably a nasty thing to look into and for me not a priority (Radio :)) but the enriched metadata is one of key selling points of Roon so it is a pity if it is not leveraged at the fullest.

If those are CD rips the inconsistency are seeing will be due to the metadata that’s gone into the files on ripping.

That Roon responds differently to that the two times could be due to (a) changes in Roon’s strategies and (b) the precise metadata available, which could easily change from week to week.

+1 I noticed this with Beatles mono box set – would prefer it showed as the individual albums.

I could not agree more, particularly with classical label releases and they numerous new boxed sets the labels are releasing
Great feature request!

Underworld : Second Toughest in the Infants (Super Deluxe) arrived today, with 4 CD’s, two free download tracks (available from the date of ordering) and a separate “HD” download link + code for the complete album.

Two problems here : All four discs in the boxed-set have their own separate titles -

And then there’s the five other “discs” - the 2 free download tracks (which could be considered as a single disc) - & the HD download versions of all 4 discs.

What is the recommended metadata approach to ensure that all of these “discs” are shown under the 2015 release - because don’t forget there’s an original album version released in 1996 too - but still retaining the clarity / separation / titling with respect to this boxed set ?

I don’t have second toughest yet, but here is how I handled Dubnobass:

I made the 24/96 download the primary version, and my original CD from 1993 as an alternate 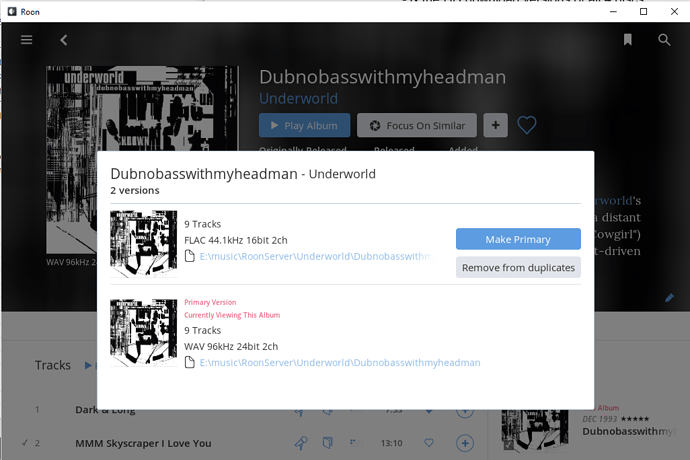 Then I have the 5 disc ‘super deluxe’ set ripped and recognized as all 5 discs: 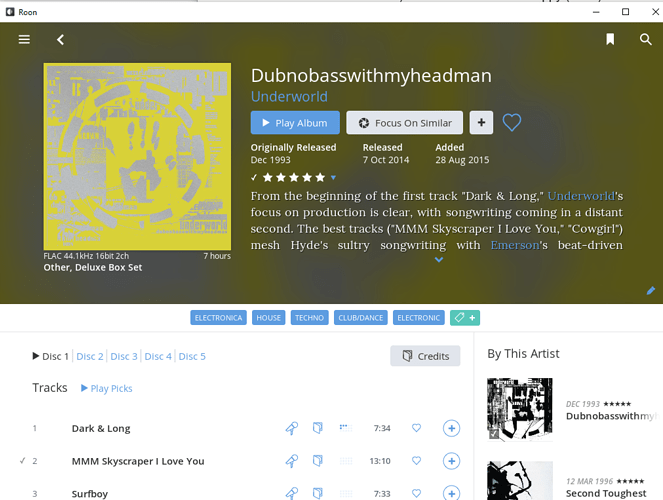 This is something that several other people have “complained” about before & is annoying - so this is a request for more flexibility to be added in disc / version labelling.
True, these cases are rare relatively speaking, but there are more and more cases every day, and this is especially important for those of us where accuracy is valued.

I think the way is for Roon to give us extended metadata editing options, and better box set handling

@rolski
The way I handle these type of sets is:-

A) manage each disc as a separate album and either make the title the differentiator or add a version comment (or both if appropriate)
B) in album browser select all
C) edit and group all as alt versions.
D) select the preferred disc as the top of the stack.

When you see these in the album browser (assume show dups is set to off) the the top of the album stack is the one you see.

This gives me a boxed set type behaviour.

Agreed that we need sophisticated handling for box sets. The main sticking point with this is that the Rovi metadata for such box sets is limited. Roon needs to push the envelope here.

I’m willing to edit details for a multiple CD box set, can somebody please clarify if this is possible or not.

I have the 6 CD Purity accuracy box set by MC5. The CDs are split between rare studio, live at various venues and rehearsals. Each CD is subtitled and each CD has it’s own cover art with the subtitle on the art.

I don’t think so right now. Either it is a multi-disc set with a single title and album art, or they are separate albums. No hybrids.

Unfortunately there doesn’t seem to be a way of either having a different graphic on each disc or the subtitle on each disc.

Yeah, this has been asked before and, AFAIR, answered in the negative.

Roon needs a lot of work in the way boxed sets are handled or not handled, IMHO.

Maybe there are so many variables, or lack of the necessary info to differentiate, that a logical solution can’t be found. Dunno.