Sort Order for Multiple Versions of an Album?

@rolski The way I handle these type of sets is:- A) manage each disc as a separate album and either make the title the differentiator or add a version comment (or both if appropriate) B) in album browser select all C) edit and group all as alt versions. D) select the preferred disc as the top of the stack. When you see these in the album browser (assume show dups is set to off) the the top of the album stack is the one you see. When you click on that album and click on the “other versions…


It works great right up to the point where I click on the Other Versions buttons and “open” the box set.

When I do that, the discs are not sorted by disc number, even though their containing folder names start with CDn (where n = disc number) and their ID3 tags have the disc number/total discs fields populated correctly. 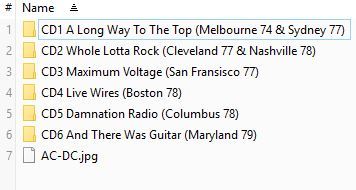 The sorting in Roon: 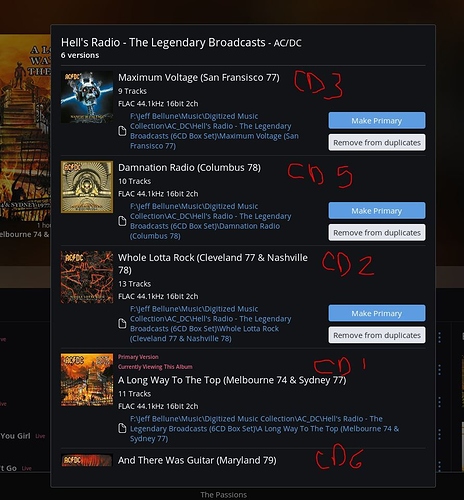 I’ve tried changing the sort order by making each album primary in turn, but I still got jumbled results.

So my question is: How does Roon sort multiple versions of an album, and is there any way to override that sorting behavior?

Bump. Not even any guesses?

I understand what you guys are going for, but this screen wasn’t designed for grouping box sets – it’s about grouping various versions of the same album, so the design reflects that use case.

Because the goal here is giving you an overview of a single album’s various editions, I believe the sorting here is by quality, with the highest resolution edition at the top.

Thanks for the info, Mike.

I’ve “liked” several posts in the threads that deal with better box set handling. Hopefully those feature requests will stay near the top of Roon’s metadata handling to do list.