Dan Tepfer is a jazz and classical pianist and composer. Locked in under the pandemic, he has programmed a computer to invert Bach’s Goldberg Variations. An article discussing the project, with links and videos, in the NewYork Times.

Dan Tepfer has programmed a computer to invert the “Goldberg” Variations. Take a listen.

Anthony Tommasini in The NY Times writes:
“Bach’s Variation No. 10, a short fugue, may be the strongest example of the “prism” effect Mr. Tepfer described. You feel you’ve heard this music before. Yet the counterpoint seems to roam all over the place and the harmonic language is vaguely like Hindemith in his Neo-Classical vein.”

I am not very interested in the Goldberg Variations, nor of Tepfer’s previous album where he adds his own improvisations to each of Bach’s. 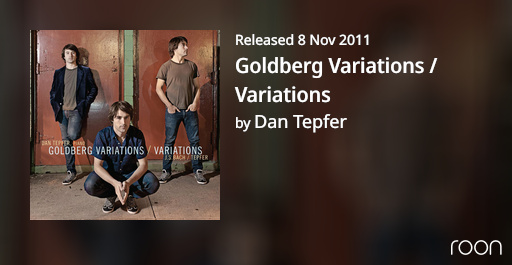 But I liked this. Hindemith!

The article has a lot of music theory that goes over my head, and so does Tepfer’s own site:
http://www.dantepfer.com/bachupsidedown/

Video recordings of each of the 15 variations he has completed.

This reminds me, @danny, of the long-standing wish to feed other sources into the Roon infrastructure. I know it’s complicated to do well, and I only want it done well, but…

Can anybody teach me how to download these videos and turn the audio into Roon albums?

Re: Rachmaninov’s Rhapsody on a Theme of Paganini; from Wikipedia (my bold):

The slow eighteenth variation is by far the best known, and it is often included on classical music compilations without the rest of the work. It is based on an inversion of the melody of Paganini’s theme. In other words, the A minor Paganini theme is literally played “upside down” in D♭ major, with a few other changes. Rachmaninoff himself recognized the appeal of this variation, saying “This one, is for my agent.”