OK Music Lovers! We’re down to the last few days and I’m committed to a few more female artists.

Nominated for best album and best song at the 2020 Grammys, she had the misfortune of going up against Billie Eilish. But don’t let that prevent you from listening to this one: 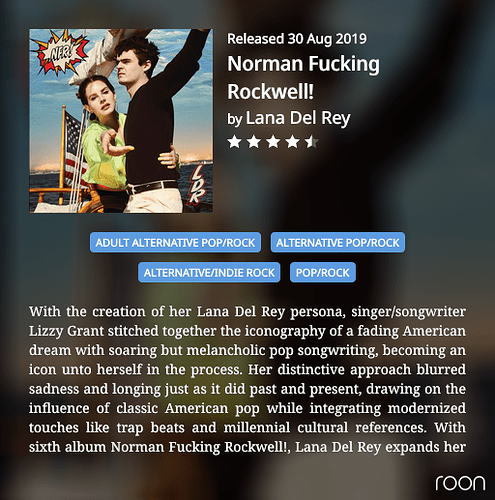 You can vote here:

If you haven’t yet voted on yesterdays album, please find it here: Day 26

Nice album which I probably would have given 5 stars instead of 3 if Cat Power hadn’t released an almost identical album 13 years earlier. 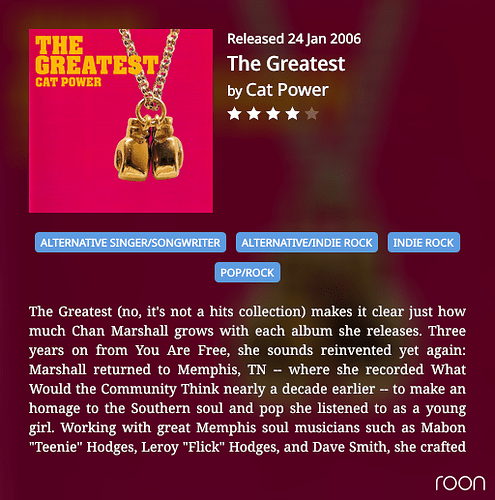 Well I’m giving this 5 stars. Impressed from the off. Her best work so far. Beautiful imagery, vocals and production.

My top picks: California and The Greatest*.

*@Jazzfan_NJ is that a nod to Cat Power?

is that a nod to Cat Power?

As I write this I’m finishing up listening to this: 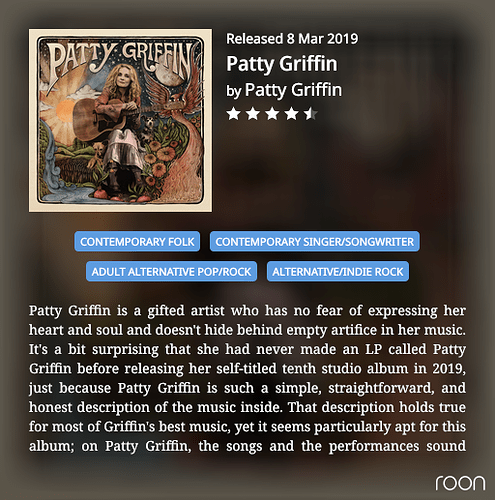 RoonShareImage-637232612216526941512×517 244 KB
and I am always amazed at just how completely and utterly worthless the Grammys are. Ms. Griffin is one of the best songwriters working today but does the Grammy committee even know that she exists?

As a life long jazz listener the Grammys are even more clueless when it comes to jazz. Year after year after year it is “Let’s give another Grammy to Herbie Hancock and Chick Corea instead of actually listening to and rewarding some younger artists who might be worthwhile.” It’s not that I don’t like or appreciate Hancock or Corea, but really do they yet another Grammy award when there are lots of other artists out there deserving of attention. End of rant.

I first heard Patty eighteen or so years ago when RadioIO were streaming. It was on the Eclectic channel and I used to pick up on artists little known in the UK. Bought all her albums ever since and saw her play at Cadogan Hall a couple of years ago. Brilliant song writer.

I don’t care much for any industry awards. They are self serving. Take the Booker Prize. Most judges don’t read all the books.

As for jazz, I dip my toe in occasionally but find it hard to separate the wheat from the chaff. Perhaps we need the jazz equivalent to @ged_hickman1’s introduction to opera thread?

As for jazz, I dip my toe in occasionally but find it hard to separate the wheat from the chaff. Perhaps we need the jazz equivalent to @ged_hickman1’s introduction to opera thread?

There are a few jazz-centric threads which almost fit the bill:
Hidden jazz
Piano jazz

But as for the proverbial “Beginner Jazz” thread I hesitate to start such a thread since the same 10 or so jazz recordings appear over and over and over again in these kinds of threads. “Kind of Blue”, “Time Out”, etc. In fact some well known jazz recordings even managed to appear in the “Hidden Gems” thread, I guess because people just can’t seem to help themselves.

Anyway that a look and listen to some of the recordings in the above referenced threads. But this discussion is veering off topic and I don’t want the thread police to appear

so we best get back to the business at hand, as in I wonder what’s in store for Day 28!

@Jazzfan_NJ and @Martin_Webster. Listened to Patty Griffin and thought it was great. First notes of first song immediately resonated with me. It was a strong start to an album. I’ll probably add this one to my library.

Listened to Cat Power (I picked Wanderer) and was also impressed, but less so. It was interesting, given the comment about Lana Del Rey, that they are friends and colleagues, and that Lana appears on a number of Cat Power albums (including the one I listened to and in particular the worst song on the album IMO). I’ll listen to a few other albums of hers to really decide what I think. My wife picked up on one of the songs (Stay) being a Rihanna cover (of course that’s not exactly fair as Rihanna doesn’t write her own music). Sure enough we found the version we were more familiar with. I thought Rihanna knocked it out of the park. Cat Power had a merely good version. I’m not a huge Rihanna fan, but I did find it interesting.

Will listen to The Greatest later today.