Deadhead Needed to Solve My Problem

I want to be able to join songs together such as
China Cat Sunflower>I Know You Rider so they play or segue into each other. If playing shuffle mode songs won’t necessarily play one after another. If you’re not familiar with GD music give it a try. Listening to one without the other is like cereal without milk. Thanks for any assistance in this matter.
Mark DeCoursey

Are the tracks sequential on the album? If so you could set them up as a multi part work and they will shuffle as a work.

You can set crossfade so that your chosen tracks will segue into each other. I have included a screenshot lifted directly from the roon user guide: 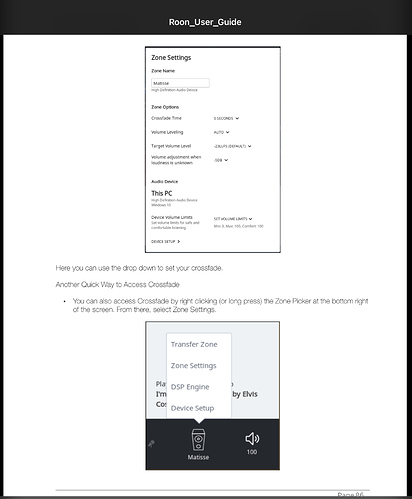 Are the tracks sequential on the album? If so you could set them up as a multi part work and they will shuffle as a work.

I love that this is the topic for @Mark_DeCoursey first post! Maybe the forum needs more Deadheads!

I can see were “multi part work” would work, but with hundreds of albums of live shows with segues, that could be a full-time job. It would be nice if that work could be shared so all deadheads wouldn’t have to go through the same work. (The best I have come up with so far I was made a TIDAL playlist of some of the “best of“ performances from polls of tape collectors, but can’t play that on shuffle either).

As an alternative, possibly Roon could figure out a way to identify adjacent tracks with no gap between and have an option to group them together when shuffling. This could work for “works” like side two of Abbey Road as well.
(BTW, I’m on day two of my Roon trial… Loving it so far)

I’ve always wondered this myself. Admittedly, I do enjoy the Dead

Can you create a playlist and join or connect two tracks, so they always play together. I like making playlists, and a live band such as the Dead is perfect for playlists. They often segue from on track to another, so it puts a damper on it when you jump from say China Cat Sunflower to Samba in the Rain. iTunes used to have a great feature that let you join tracks within an album, this way you wouldn’t have to join the entire album. I never used the feature described above in Roon. Would it allow me to pick out two songs in an album and always have them play in sequence in a playlist? Last thing, iTunes used to allow you to start a track say 40 seconds in, or end it a few seconds early. This was great for removing banter in between songs of a live recording. Both would be great features for Dead heads, or lovers of live recordings.

Thanks to all for the kind help to solve my problem. I’m gonna have music weekend to figure implement and will report back. But yes basically they are adjacent tracks that must be played concurrently without pause. I’ve catalogued my Dead Cassette and CD Collections now it only follows that I do the same with my Flac Library. Don’t know what the next format may be but I’ve got plenty of work doing this. Roon was highly recommended by a good friend with very high musical standards. Peace to all and stay safe.

In 1985 I saw them go from China Cat into Cumberland Blues and it was wild.

An aside… I have Roon Radio playing now and The Koln Concert -Keith Jarrett (from Tidal, not the one in my library) came on and they have it combined to play all 4 parts, so it is not just classical pieces set up to play as multi-part works.

I’m curious about 1) who sets the metadata for this, Tidal or Roon, and 2) if they would be willing to have Deadheads contribute set suggestions to be grouped (or share our own modifications).

I have maybe 900 Grateful Dead shows/albums. (My first in person show was December 1969.) I solve this problem by almost always playing entire shows. Or sometimes only set 2. Crossfading is not needed as the underlying “albums” are gapless to begin with in my digital collections. I can see that if one instead wanted a playlist or random plays drawn from different albums/live shows that this would be a challenge. If I was doing this for a small number of playlists, I would simply include the “joined” songs back to back in the playlist and NOT have the playlists play in any sort of random order.

edit: just looked, 867 GD albums or live shows. But this doesn’t include the 83 Jerry Garcia albums/shows, or the 66 Phil Lesh & Friends shows.

I currently do the same with my mere 100+ concert collection (I’m envious), but I liked Mark’s (thread starter) request to be able to have sets combined when listening to random tracks (or “similar” music on Roon radio). It would be nice to be able to share the efforts to group sets with others…

Agree that the concept is nice, but I have a hard time picturing how to share such “grouping” activities. These are mostly not official albums, not “identified” by Roon, and even something simple like creating a regular playlist (which is just a text file with audio file references) is not very universal. Not everyone’s track file names, folder structure, etc. is identical. So referencing such tracks within a “group playlist” would be quite a challenge, if not impossible.