Over the last couple of days I have observed a couple of composition mismatches happening for Debussy compositions.

That means that now all my La Mer work tags that have “La Mer, L.109” are identifed as L’isle joyeuse 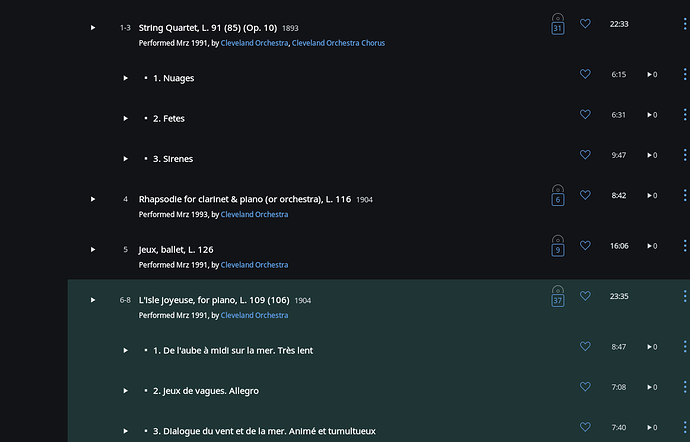 What’s happening here? I’m absolutely certain that these works were correctly identified in the past. Something’s mixed up…

@joel can you guys help?

Hi @Klaus_Kammerer1 What is your album?

my problem is, that currently half of my Debussy La Mers are assigned to L’Isle joyeuse. The album from the screenshot is Boulez/Cleveland/DGG.

It seems to happen for all my albums where I have set “Prefer File” for the composition. The Work tag is "La Mer, L. 109
What puzzles me is that number in brackets in the composition. I have had similar problems with some Bach compositions.

Misidentification of some Bach works - BWV vs. BC Metadata Issues

I am observing a couple of odd misidentification of Bach works that seem to be based on some Roon magic ;-). Case 1 Cantata BWV 198 (Lass Fürstin, lass noch einen Strahl) Cantata BWV 199 (Mein Herze schwimmt im Blut) For some recordings, like the Bach 2000 box set, the cantata BWV 198 is attributed to recordings of both BWV 198 and BWV 199. What I find interesting, is that both works are attributed to BC A120. I have no access to a proper list for the Bach Compendium Catalogue, but it looks…

Could that be related?

I also noticed and reported in another thread, that Roon does not accept my general library settings as “Prefer Roon”

Can I set roon to always apply my metadata preference settings? I selected all albums, applied my prefered metadata settings, hit save. Roon states it is saving the settings to the database, but when I add new albums or re-tag existing albums, my settings seems to get ignored. Or am I doing something wrong?

I cannot say for sure, but my feeling is that the chaos started when I changed my library preferences back from “prefer file” to “prefer Roon” on a global level.

Somehow Roon tries to match my local tags to its composition and my feeling is that it is looking at the wrong key for opus at random. All those misidentifed compositions have a number string in common in their title.

I may have found the reason for the mixup. There seems to be a revision of the Lesure catalogue.

Wikipedia lists La Mer as L 109, whereas the above website lists it as L 111 (109), just as Rovi. But I still think that this was a rather recent change in composition keys as far as Rovi is concerned. I’m pretty sure that all compositions had been identifief “correctly” (i.e. according to the "old L numbers) in the past for me

Thanks Klaus. Am I allowed to say that I really dislike classical metadata?

as my daughters would say: “I feel you bro’”

I just stumbled into the same confusion between La Mer and L’isle joyeuse. It seems that the identified albums are listed as "La Mer, symphonic sketches… "

To recap and clarify the discoveries made and reported in this thread, any recordings made from about 1977 to 2003 are likely to have errors in Debussy’s L. (a.k.a. opus) numbers. Lesure (Mr. L), it seems was off his game in 1977, but his mistakes were not discovered or corrected until 2003. This has the perverse effect of causing incorrect metadata links.

So: Particularly for pre-2003 Debussy albums, all of your taggings should be treated as suspect. I have a 1994 Debussy Piano Works (4 CDs). Four months ago, I pulled in MusicBrainz tags for about 30 compositions (89 tracks) on the album. All were later discovered to be wrong and required manual retagging.

One strong suggestion: when looking for the correct canonical composition names, use ONLY Allmusic, Not MusicBrainz, not IMSLP, not the first thing Google finds, not Discogs. This is hard enough. Even if you run it through your favorite tagger app, it probably won’t be using Rovi, so beware.

And, if you’ve never listened to Debussy, don’t start.

One final postscript: Roon is guiltless on this issue, IMHO. NO ONE is going to amend existing once-accurate tags: not the labels, not Rovi, and certainly not Roon. Rag on them for something else.

One strong suggestion: when looking for the correct canonical composition names, use ONLY Allmusic , Not MusicBrainz, not IMSLP, not the first thing Google finds, not Discogs. This is hard enough. Even if you run it through your favorite tagger app, it probably won’t be using Rovi, so beware .

that’s what I have adopted as my current tagging strategy, even if it gives me english work titles… ;-). I’d rather have a more consistent work identification process than a proper localization.

Thanks John. I have a Giesking Debussy album with Images #2 misidentified as La Mer. You say to fix this requires manual tagging. I added WORK and PART tags to all the tracks that needed them, then set Album Editor, Metadata Preference->Multi-part Composition Group to Prefer File. Nothing I do seems to change Roon’s composition title to Images #2 instead of La Mer.

Could you, or anyone else who has fixed this, tell me what you did to fix it? I’m still rather new at this, so be gentle, please.

Sorry, I started listening to Debussy a very long time ago… too late to stop now…
-Jan

Basically, the approach I will describe is done by using an third-party tagger such as MP3Tag or Yate. First, the manual part. I log on to the Allmusic site (prolly want to get a $12/yr subscription), search for Debussy, click on his Compositions, hand-search for the “canonical title” for the work in question, copy that description (and avoid copying hidden HTML code), then, with your tagger opened to that album, paste the name into the WORK fields for each Images track you have. THEN, once you’ve entered the WORK stuff (e.g. “Images (3), for piano, Set I, L. 105 (110)”), then fill in the PART pieces on each track (“Reflets dans L’Eau”, “Hommage a Rameau”, “Mouvement”, e.g.)

Save and see if the changes work. Why do I do this instead of making Roon edits, you may ask? Well, fooling with Roon edits is a “black box” affair. I’m still trying to figure out how it works. Even if it does work, your hard-fought edits aren’t written to your music files. And I have grown weary of playing “guess the solution” with that portion of the software.

The tagging approach above isn’t much easier, but it is “usually” reliable.

Jan, you said you “created WORK and PART tags where necessary”. I assumed in my answer that you did NOT populate them, or at least did not put the correct info in them.

Roon sometimes will ignore valid tagger changes to tags. Is this what you are experiencing? If so, one step is to “un-identify” your album by going to Edit Album/Identify album, then blindly clicking on “nothing seems to match” a couple of times.

If THAT doesn’t show your tag changes, you can try to Revert Edits. Caution: this will undo any and all Roon edits you have ever made to this album. The idea is to clear out any hidden obtrusive junk edits that may be gumming up the works.

And if THAT doesn’t work, you can clear Roon’s memory of this album. To do this, using your OS, make a copy of the offending folder to your desktop, then delete the folder from the Roon watch folder location, then go into Settings/Library and Clean Up your library, then put the copy you made earlier back into the watch folder.

And if THAT doesn’t work, just listen to the undocumented music, and chill.

Thanks very much John. Changing my WORK tags to match allmusic.com values as you suggested seems to have done the trick. And I fixed Estampes too, for good measure! Yay! A small victory, but I’ll take it. This is a complete list of compositions by Claude Debussy initially categorized by genre, and sorted within each genre by "CD" number according to the 2001 revised catalogue by musicologist François Lesure (French: [ləsyʁ]), which is generally in chronologically order of composition date. "L" numbers are also given from Lesure's original 1977 catalogue. Debussy's compositions were not given opus numbers, except for his String Quartet (inexplicably labeled Op. 10). (The "CD." and "L." headers are...


while the french WIKI reports only AC while allmusic reports (as far as i can see) the recent number first, then the second in brakets

the result is that in every library with tagged files everything is mixed up.

in all this, it seems to me that the allmusic approach is ambiguous.
the same situation occurs for example in Liszt, where there is a double catalog number (S. and LW) and where allmusic correctly reports both:

so my suggestion could be to correct the rovi metadata with the 2 catalog codes (AC and L) and apply (if in any way necessary) the same identification rules that work for Liszt.
@joel do you think this is possible?

My solution to this problem has been to accept that there is no easy way to do it, but using ROON´s tag and bookmark options I have managed to curate my library to my own taste.

It´s quite time consuming with about 2000 albums - Tidal and stored files, but spending a little bit of time every now and then is well worth the effort.

One of the options that to me is absolutely fabolous is editing the Tidal metadata such as labels and which particular mastering/ mastering engineer behind different releases. Maybe a bit nerdy, but to me it´s of great importance.

Examples; using tags and bookmarks I can with one click get all my Blue note albums that are remastered by Kevin Gray. Another click gives me all Analogue productions/ RCA Victor/ Living stereo releases conducted by Charles Munch in DSD64 format - the options are endless. Hoorray!

All the best from the land of (bi)polar bears a.k.a No®way

this mess is quite annoying for roon, its main promise is to cure your library requiring no work on users’s side.
i think an overall solution by roon’s @staff would be… the only solution