I’m a new user to Roon taking a trial at the moment. I have large collection of electronic music, Ibiza centric and funk CDs. Most are compilations and my first test of an import showed the artists on the album as various artists. Many of the artists on my CDs won’t have their own albums. Shazam can recognise the songs artists. Would I have to edit every track to add artists names? That’s just unfeasible for me with time constraints.

Also, I’m thinking of getting a CD ripper with a hard drive so I don’t have to sit in front of a computer. I’m undecided between a Brennan https://www.brennan.co.uk or a Cocktail Audio X14 http://www.cocktailaudio.com/home/sub01_10.php. What are the disadvantages of using a system like this compared to dedicated computer ripping?

What software did you use to rip the CDs for your test?

I used itunes. I see people recommending dBpoweramp but I’d rather use one of those dedicated ripping devices I mentioned (if possible) because I’m trying to find a solution to getting my CDs ripped in a database without spending more time in front of a computer, which I do all day at work anyway.
I thinking of having the Roon software in a powerful enough NAs and pointing to the hard drive / volume in the Brennan or Cocktail

Are these official releases? Also, please share a screenshot of an album. 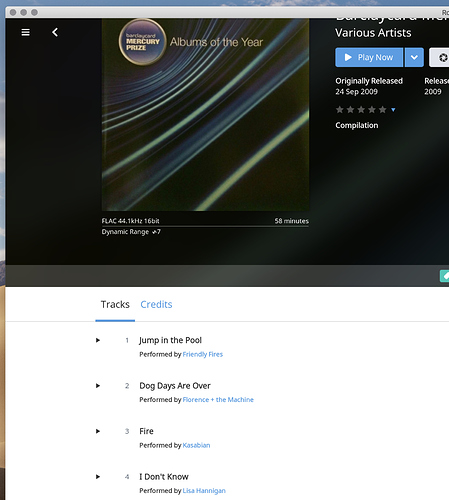 In this release, the Album Artist is Various Artists, but each track is credited to the Primary Artist.

I don’t have experience of using the all in one devices but I would imagine that their internal metadata tagging would be tilted to satisfying their own software. Roon for compilations etc needs the Album Artist to be Various Artists but the individual tracks to be tagged with the actual artist.

You might want to put in a request under the Audio Products category asking for other user experiences with those devices.

Users seem to be in 3 groups (with my cynical hat on)
1.roon users who are happy so never use the forum
2.roon users who are mainly happy with the way roon handles metadata and are willing to work around any quirks or areas the roon team have acknowledged aren’t great and they are working on a complete rewrite of UI and classical, box sets etc.
3.roon users who have unique or immensely detailed metadata needs and want roon to be developed to align with their precise needs or want the promised change immediately.

Have a much around the forums and you will get the flavour and Welcome!!

Hi Yes, They are official releases. Most are mixed CDs.

Could they create their database using barcodes? For example, if you have a re-mastered / re-released cd Grace Note won’t know which is the latest version if track length is equal. Software called Delicious Library lets you scan a barcode with your phone and then the appropriate artwork is downloaded to their library. It would be ideal if they could assign tracks and artists to an inserted CD 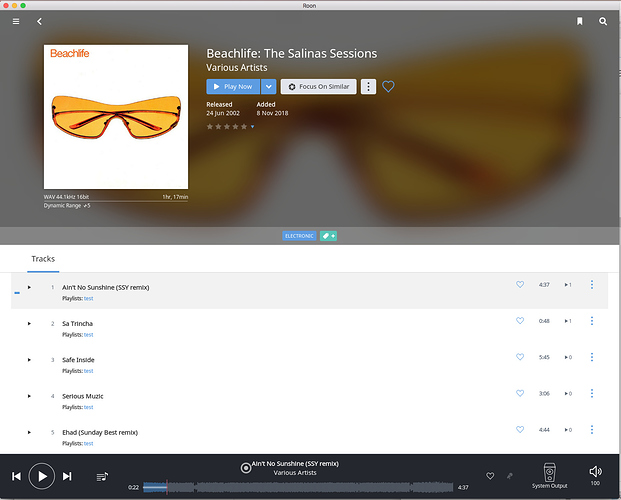 Looking at that screenshot, I notice that no track artists are listed. That may be down to iTunes not filling out the metadata. I use dBpoweramp, which gives much more control over metadata, so my compilation albums end up looking something like this: 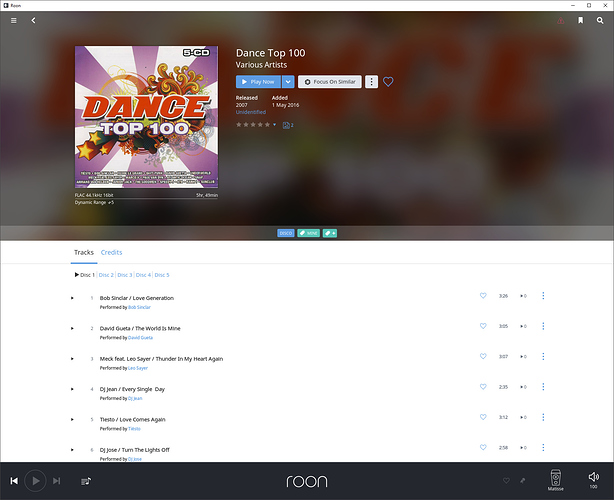 I’m undecided between a Brennan or a Cocktail Audio X14

They’re both computers you’ll have to sit in front of while ripping your collection. And they both have all-in-one design issues you may have to deal with. For instance, are they Roon endpoints? Can they run Roon core? Do you need the built-in amps? How hard is it to use the music files once you’ve put them into the device?

I went through this a few months ago, deciding to rip my thousand CDs to lossless format. I did some ripping with iTunes, a MBP, and an external CD drive. But iTunes splits up the folder structure for box sets in a way which is inimical to Roon (artist, then album). Lots of problems and fixing-up with iTunes. Finally I got a new computer dedicated to running Roon Core and extensions, with a beefy processor and built-in CD drive and SSD for music files. I also plugged my exernal CD drive into that computer, giving me two drives, so 2 rips at once. I also had a little spring-loaded portable CD drive, so I added that in, too. 3 drives. I then used cdda2track to rip; its metadata is as good as anything else (meaning not all that great – even the record companies don’t have good metadata for their releases), and it checks the AccurateRip DB to verify the rip. I wrapped a little script around cdda2track (which is itself a little script around Python Audio Tools) to eject the disk when it’s finished.

So: put three CDs in, type “rip-cd” (the name of my little script) three times, go off and do something else. The ripped CD lands in the Roon DB directory (and is copied to my NAS for backup). So when I see the album covers appear on the Roon remote, I know they’re done, but I don’t have to be there except to re-fill the drives.

I used itunes. I see people recommending dBpoweramp but I’d rather use one of those dedicated ripping devices I mentioned (if possible) because I’m trying to find a solution to getting my CDs ripped in a database without spending more time in front of a computer, which I do all day at work anyway.

Another suggestion: Use an autoload CD Drive like the Nimbie: http://www.acronova.com/product/auto-cd-dvd-publisher-ripper-lightscribe-nimbie-usb-nb11/2/review.html. With a PC you can use dBpoweramp, and let it go with a large stack of CDs.
SK

With respect to those albums you’ve already ripped that are not identified correctly–possibly because there is missing Meta data–I suggest you download MusicBrainz Picard (free software and service) to identify and correctly tag the albums. If it doesn’t find the correct album you can manually identify it using the barcode number.

Please note that MusicBrainz isn’t a CD ripper. BTW, did you say how many CDs are in your collection that you’ve yet to rip? It took me a couple of weeks to rip around 700 CDs, but you could use a ripping service. They charge around £0.70 to £0.80 per CD; not a cheap option but worth considering.

The Cocktail Audio X14 doesn’t even appear to have a CD drive. You have to attach one externally.

Hi guys, Thank you for your helpful help and feedback. A supportive community is a bonus.

@ bill, Scripts for ripping from multiple drives is a very good tip with USB CD drives so cheap these days.
I know technically they are computers but they are more living room friendly. Otherwise, I’d be confined to my office every night sat, in an office chair ripping CD’s. It could be considered quite beneficial that the CD drive is external because it’s probably the most delicate part of the system and more prone to wear and tear. I’d prefer not to put Roon on the iMac in my home office because I’m occasionally using that for photoshop and other intensive apps. I was a considering a NAS tucked away, like the Qnap HS-453DX

@ Esskay, Thank you for the recommend, I’d never heard of these. At that price I’d like to find a secondhand one or at that

@Martin, I probably have in the region of 2k -3k + I’ve been working in record labels for 40 years so many were gifted promos. I’ve bee through this ripping process many years ago but I’d ripped to mp3 and now I want to finally rip to FLAC or ALAC