@Dan_Knight I see here that you added Roon Server to the DietPi installs!

I guess this could be used as a roon/tidal cheap interface but realistically one would not want a large library or audio assessment should be turned off.

Is anyone running this currently here - care to comment on the performance?

Will it run better on the Sparkey with the LAN/Ethernet performance being better?

We’ve been here before, and it’s not really what you think it is…

I’ve just noticed that @Dan_Knight announced the availability of Roon Server on DietPi. I rather thought that the RPi would not have enough horsepower to cope with Roon Server on anything more than a very small music library. Has anyone tried this out yet?

Yep, Roon Server is only available for x86 systems at this time, as we lack ARM binaries:
https://roonlabs.com/downloads.html

I’ve only quickly tested it on x86_64 native PC during implementation into DietPi, not personally had a chance to really test its performance yet

Installed no issues (without wifi) and updated dietpi then installed Roon Server. 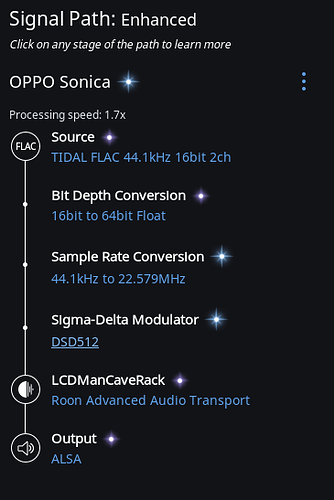 Ok well maybe the DSD512 was a bit of a stretch…it did run for a few mins…but seems MUCH happier without it. Ill keep testing - but its working at least with 150,000 tracks library… seems its scanning so that could be the cause… using all 4 cores…so throttling that back to 2 and will see how it recovers after its done

All in all pretty happy tho so far

DSD512 should be fine on that system.

I’ve been running Debian on a NUC6i5 every since the first traces of Roon Server for Linux. It has been fast en rock solid ever since.

Last month I’ve been playing DSD512 exclusively to a Pre Box S2 for about a week. I came away unimpressed (and have since sold on the S2), but the NUC ran absolutely flawless at 1.4x speed.

Since the Passmark score of your i5 is about 1.65x higher than mine, I guess you will be fine once Roon is done restoring and scanning.

Hi Rene…Its done scanning the tracks…but now it has some audio analysis going on with 4 cores flat out…once all that has settled down I think the DSD will be back to operable again.

I’m running this a small experiment to see just how light one can get linux without too much effort for anyone with little or no linux tuning capability.

I must say aside from the wifi drivers being flagged as not free…its been a doddle to install.

I rather would have this on a non wifi equipped mobo but its what I had to hand… its was running ROCK (as a MOCK) with no issues.

The only thing that would probably help right now as I removed the SSD that had ROCK on it…is instead of the 750GB HDD is to drop a small M.2 2240/60/80 PCIe card and run it up off that… so once I am happy… and the shops are open again (Chinese New year here) I will go and get one and see if I can’t make it run a bit snappier in the searches…its not too shabby right now tho.

@Dan_Knight had a power outage and when I powered up the Roon Server with DietPi AMD64 I had to do a full setup - like it lost the database … sign in to roon and tidal and no music store location… any thoughts? Roon Build is V1.4.310

It did seem to remember the Roon backups folder location I had internally setup in the Root folder.

The only thing I can think of is, in terms of DietPi’s end:

However, once the software is installed, DietPi will reboot the system. So any changes made during dietpi-software installs, should not be affected.

It may be that the Roon Server application did not save the database/settings correctly, maybe it also loads into RAM and saves on process termination, however, unsure, would need a Roon dev to verify.

Aside from the service above and setting up the data locations, I believe the location must be manually setup in Roon Server during initial run.

Its as you posted exactly when I cat /etc/systemd/system/roonserver.service

Also I see the structure here

Anyone still using roon core on dietpi x64? I’m keen on moving to it and having one less machine in my rack.

I asked this question @ dietpi forums but they directed me to ask here. Would be grateful for any feedback.

I gave up and ran ROCK instead didnt really need any more than that.