Dirac SDK raises hopes Dirac can be integrated in Roon!

Even if Dirac has not been integrated, Roon can be used with Dirac AU plugins, I’ve configured Roon to use them in their current beta DL 1.x version and used them with success.
(the upcoming Dirac Live 2.0 will feature AU and VST plugins as well)

As you can see in the image linked here: http://diracdocs.com/Roon&Dirac.png
one can use Audio Hijack so that the music stream from Roon is routed to the Dirac plugin first and from that to the DAC, or any output device.
(by the way Audio Hijack can be used for a number of other purposes)

One has to drag the Application icon from the menu on the right and then click it in order to select Roon so that audio from Roon will be captured
Then the Audio Units icon has to be dragged after the first icon and they will be automatically connected, the icon has to be clicked and Dirac plugin selected.
Last the output Device icon, again it will be automatically connected defining the path and the output device of choice has to be selected

Flavio, it’s obvious to anyone with half a brain and either a mac or a windows box connected directly to a dac that integrating Roon and Dirac is relatively trivial, but that’s a bit beside @Frans’ point, or the question being asked, here : if I’m not mistaken, the sole option for a separated server / client model is running a client with a full windows or OSX install, with all the compromises that entails, and installing Dirac on top of that. That I know of, the AU/VST option you’re proposing doesn’t allow simultaneous multiroom, doesn’t allow anything else than full-featured clients, in essence, neither takes advantage of the comparatively important processing ability built into a Roon core, nor of the advantages of running power-efficient and/or relatively cheap endpoints.

I’ve minimal hands on experience with Roon, actually I’ve just experimented with the configuration I wrote about.
Does the simultaneous multiroom set-up that you’re referring to allow an individual different mixed-phase correction for each of the rooms?
If not (from my admittedly biased point of view) one has to choose between a significant compromise in digital room correction with the advantage of multiroom and a state of the art digital room correction in the main listening room only.
That might be the right choice for some but others that want to enjoy both Roon and Dirac Live might think differently.

Does the simultaneous multiroom set-up that you’re referring to allow an individual different mixed-phase correction for each of the rooms?

Flavio, please don’t start playing marketing FUD. It’s beneath you. The answer to that is “of course they don’t, because Dirac are the only ones who do it”, but that’s beside both my point, and @Frans’, and you know that.

We know your filters are good, and that’s why people’ve been paying €650 for software you don’t bother keeping up to date (High Sierra anyone ? It’s only been a year since the issue popped up, after all…) and been asking you to work on getting Dirac to run as some sort of a plugin for Roon.
The reason to this is running Dirac as a Roon plugin, i.e, piping Dirac’s output into Roon’s transport would allow anything Dirac computes to be sent to any Roon client (or “endpoint”). This is what @Frans was asking about, and that is why people are asking for integration. Right now, as long as you have the processing power on the core, anything that can be done with .wav convolution can be done by Roon, and the same would likely apply to Dirac. Now I completely understand you’d rather sell a bunch of $800 MiniDSP dongles, but don’t you think it’d be smarter to do it on a server ?

I don’t play marketing FUD and I’d love to see Dirac integrated into Roon,
that’s not in our hands though as it’s a RoonLabs decision, my post is about a possibility of Roon to use standard plugins (including Dirac Live)

Sorry for coming out at you that hard. It really sounded like you were trying to deflect.

I’d love to see Dirac integrated into Roon, that’s not in our hands though as it’s a RoonLabs decision

If it wasn’t obvious, so do many people here, but from here, and despite your post, it looks like it’s out of RoonLabs’ hands.

My read was that it was more about a host OS’s ability to use audio plugins (in the case of the screenshot you posted, Apple’s OSX). The reason that my read was what it was is that if it had been about Roon, it’d also work on RoonLabs’ reference implementation, which is ROCK / Nucleus. So, how does one get Dirac correction on those ?

Thanks for retracting about FUD, appreciated.
I know nothing about ROCK/Nucleus… sorry.
Neeedless to say licensing Dirac has a cost and RoonLabs can quite legitimately decide to propose other solutions.

I know nothing about ROCK/Nucleus

I think this is the point behind the question.

The Roon world is different.
Not just that it is inherently distributed.
But my multiroom system uses no Windows or MacOS devices.
Not just Nucleus, but all the endpoints are connected through devices like the MicroRendu, and a few iOS.

A good Dirac answer must accommodate this.

It is ok to involve a Windows machine during measurement and configuration, I did that using Acourate. But not at runtime.

Right now I point Roon to Dirac Live (PC) and the Dirac Live WASAPI driver points to my DAC’s ASIO driver, and that then goes over USB to my DAC to play back the Dirac Live enhanced music. It would be great if the wonky Dirac UI would not need to run at all, nor would we need to “point” to Dirac Live within Roon. This would solve a bunch of problems. 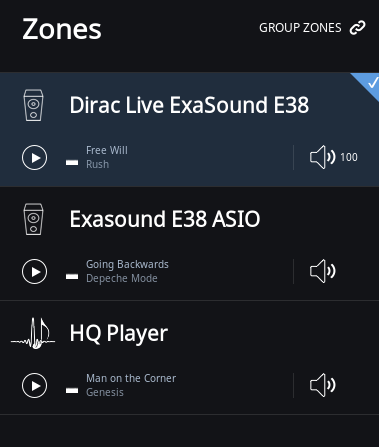 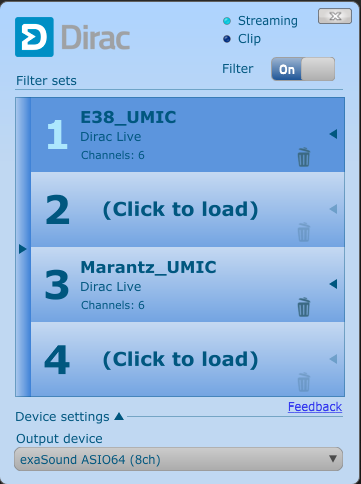 Would love to see the Dirac Live filters were applied within Roon and we can point directly to the DAC or network streamer.

@flak, I believe @Frans suggestion in his most recent post is the only sensible solution. The user does measurements in Dirac, but Roon runs the correction internally on it’s Core just like with a convolution. I can see a problem with the Dirac licensing model here. It’s made for a single running correction, Roon can serve multiple rooms which each should have it’s own correction. I am sure Dirac can come up with a way to deal with this.

The Dirac licensing model has room to evolve given the price-point.

Trinnov offers Roon ready preamps, DACS, etc all running with the best possible room correction in the market. Yes they’re expensive (around 6 times more than a typical Dirac solution for their cheapest kit) but their room correction based on that 3D microphone is that much better.

There are several roon end point product solutions. One I am looking forward to seeing is:
https://nadelectronics.com/product/c-658-bluos-streaming-dac/

What would be especially nice is if there was a Roon based Dirac option though I am not certain how that would work. Roon/Dirac would need to “play nice” and this may or may not be on Roon/Dirac radar. I am hopeful someone from Roon will respond to this question???

Also Roon would need to be able to store separate Dirac correction files for each endpoint. Roon seems to be able to do this in “Convolution”?

I guess that is one of the problems. Dirac wants you to buy one licence per system or zone in Roon lingo. In addition Dirac doesn’t support Linux so that might be a problem (though I am not sure about this) Roon works on Windows, Mac and Linux.

maybe this is a stupid question, but i need to ask before i begin my roon trial. as i urgently need DIRAC due to the fact that my room is an acoustical desaster, i need to know whether the follwing scenario is working:
macmini (16GB RAM, 512GB SDD; all roon software installed on this macmini excluding roon iPad app; music on external HDD; DIRAC installed on the macmini) -> select DIRAC as audio output device from roon -> USB DAC.
this is what i am currently doing with puremusic and that works fine. now i am intending do cease puremusic and use roon instead … but i can i select DIRAC as an audio output device from roon?

thanks a lot
timo

How do you know?

People from Dirac as well as Roon were telling me. Hopefully Corona didn‘t have a negative impact on that.

That would be great news indeed! I’m currenntly using Dirac 1.2.