Will that be possible in ROON?

As per the subject line, is it possible to use VST plugins in Roon?

I have same question/issue/concern. I believe the question is not what is currently the Roon/Dirac Live status, but what will be possible in the future.

what will be possible in the future

The million dollar question… Only Roon know.
But see above, it’s been discussed since 2015, and still isn’t supported, so I think you can hedge your bets

Ok, wait and see!
Maybee one does not need to update. I am not sure what is in the new version and the present works fine!

The latest from Dirac (Today) is they “are working on the new standalone version for PC and Mac that will use AU or VST plugins but it’s not ready yet”.
They further commented that their “understanding is that AU/VST support by Roon is unlikely”. That’s unfortunate for those of us that swear by ROON, Dirac and hope to optimize with endpoints like RoPieee or other remote solutions while still being able to benefit from Dirac. I am told one can add external programs like Audio Hijack, but that hardly an elegant solution compared to ROON directly supporting AU/VST.
@support can you comment?
At the risk of being redundant, I’m told that my use of MacBook Pro as core and endpoint is so very inferior for a sonic standpoint, yet I’m faced with needing to go through external software gymnastics (e.g. Audio Hijack) if I want to utilize Dirac (which I consider absolutely essential) if I want to improve SQ by remote endpoint. Frankly, it’s frustrating.

For more specific details on our stance regarding AU/VST plugins in Roon, I will direct you to a statement made by our CTO in an earlier feature request thread on this topic:

Although I appreciate you responding to my query, I’m a bit puzzled that the “statement” you referenced is now over three (3) years old. In the fast moving world of technology, it’s difficult to believe that nothing has changed.

No the problem Brian mentions still exists. That’s just how VST/AU plugin configuration works. In fact they have been this way for as long as I can remember, at least 10+ years that I can remember using them.

Well, I am still learning, so thanks for the information.
That said, I read Brian’s statement to contain the suggestion that it could be integrated if some things changed.

“It’s frustrating that the vendors of these plugin systems didn’t think bigger, or consider that architectures other than “standalone app with UI” might exist one day.

Anyways, that’s why, as much as we’d like to do it, I don’t think VST/AU are in the near future for Roon.”

Doesn’t sound like a dead end to me…
Perhaps just wishful thinking.

Wouldn’t it be great if ROON would partner with DIRAC or a similar tech firm to integrate the functionality into ROON to enable you to make use of Roon DSP’s convolution based on measurements (and advice) not trail and error !

sorry for the spam Rob

Yes, but at the speed that DIRAC develop and release software, we would be waiting a very long time…

Easier to ask DIRAC to develop a convolution file output that Roon can use directly via its DSP function.

It’s very unlikely that DIRAC would share their closely protected room calibration with something like Roon. They’ve even made the whole DIRAC online only so you can’t modify the curves offline. Previously you were able to do most of the process offline then connect the gateway at the end.

Like your thinking Anthony. Do you know the place to share this request with ROON initially to hear their perspective

There’s been at least three posts in Feature Requests already. This one has the closest we have to an official Roonlabs stance on the question.

Dirac seemed very moderately interested in actual integration, and @flak suggested the third-party workarounds that’ve been talked about already. My personal feeling is that Trinnov would be a better, more organic, and maybe more motivated match, the questions of course being whether they’re interested, and how much.

As soon as the new VST version comes out, you guys can try this:

Feed the roon(LMS) output to the squeeze2upnp (one in DOS window), then feed its output to the foobar2000, run Dirac in VST form hosted by the foobar2000 (sorry I am substituting the Dirac plugin with the TDL Slick EQ VST plugin in the picture for an obvious reason), then output it to your dac, femto renderer, another signal processor, what have you.

Maybe there is a better, simpler way to plug in the Dirac VST in the playback chain. So when will we have the Dirac 2.0 VST (or AU)? BTW SQ is really nice through the foobar2000. Too bad I cannot achieve 24 bit playback yet for some technical reason. I am working on it with respective developers. So for now we have a working solution in 16 bit.

Just installed VST plugins (beta). Trying out with foobar2000 getting its input from roon(LMS) via squeeze2upnp and its output going into JPLAY femto machines. Running quite nicely on a WS2019 core machine. Still buggy as it crashes my foobar if I change Dirac settings while hosted by foobar (@flak) . If I do not touch it, it runs fine. So for now I can use the standalone Dirac Live Processor to change its settings as simple a thing as switching between different filters.

SQ is nothing to fault at so far. Music players are better defined. Very 3d sounding especially vocals. HF is much smoother, but with less sparkle. I prefer flat target curve (vs one shown below, the sloping down one). The speaker pair I tested with has relatively flat response and Dirac effect was rather minimal. I can live with or without Dirac for this pair. Later I will test it with larger speakers which have much worse frequency response in my room. Oh Dirac Live calibration tool is running quite stable. I like its new UI. It takes a little while getting used to, thou.

One exceptional finding. Vocal is less sibilant but the sibilance is rougher (a bit sounding like distortion) at the same time. I hope the production version will iron this out.

I resampled everything to 48khz before leaving roon.
.
. 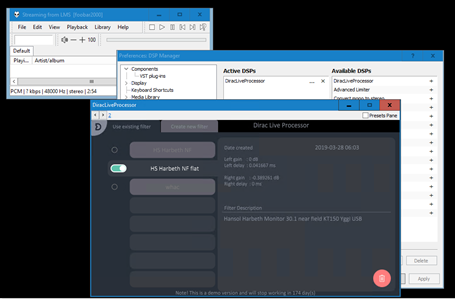 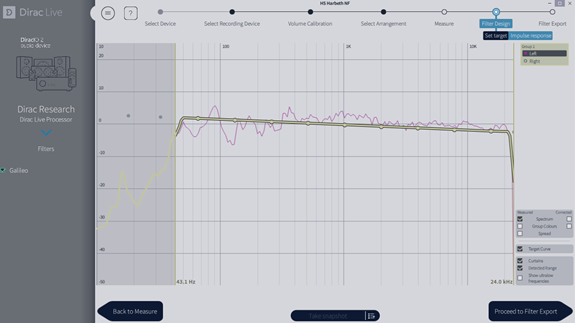 Anyone can report recent experiences with Dirac 2.0 & roon?

Hallo again! I am now back as a member of ROON. I have been testing a few beta versions of the new Dirac plugin in a VST Host. Now there is a “sharp” version. It works with ROON and also with anything You play from the computor , for example Spotify.
The problem I have with Dirac right now is that it does not accept my mic, which it has done before! But the filters I have created earlier with the new Dirac works in the processor part of Dirac.
Search for “Using Dirac plugins with players that don`t support standard AU or VST plugins” , in Google, and You will find a manual.

Thanks for the info- is this only applicable to Windows?