I contacted Roon and asked if Roon Core would recognise the second M2 input on the Nucleus - the one that usually accomodates a wifi M2 board. Got a non-committal reply so decided to try it anyway.

Object was to see if I could run a fibre cable directly from my fibre-equipped network to the Nucleus without a Fibre/LAN interface box - which I currently use. Obvious plus of eliminating any copper right into the Nucleus and eliminating another box and power supply.

Purchased eBay item 193405123698 - an extension M2 board as the fibre network adapter (eBay item 202237539890) could not physically fit in the Nucleus. Everything fit and the correct LEDs came on but Roon did not see my network.

I emailed Roon again and they replied the ‘Nucleus is not designed for this type of modification’ and ‘it seems pretty unlikely to happen’.

Seems its a great mod for those pursuing a comparison between copper and fibre. Also seems that, as that M2 port is designed to accept a network connection, it might be just a matter of enabling it in the Roon operating system. I suspect it’s been disabled in the Nucleus for power/heat reasons. Would be nice to have it turned on, Roon… 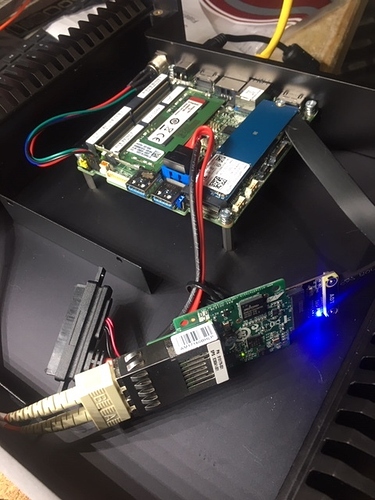 If you want that level of tinkering why did you not just go with a standard NUC and Linux?

Still wouldn’t get past the Roon core not recognizing the second M2.

Also, it’s not ‘that high a level of tinkering’ is it? Just two pieces of hardware that I plugged into an M2 port. Not that expensive and can be used elsewhere - just not Roon. Sadly.

If it had worked (or Roon makes it work

) it would satisfy a lot of hard core audiophiles looking to eliminate LAN cables. I may be wrong but I don’t think it’s too difficult for Roon to activate - after all, that second M2 port usually accommodates a WiFi network connection.

But, to answer your question, I got the Nucleus in a trade for other equipment.

Also, it’s not ‘that high a level of tinkering’ is it?

With a Nucleus, I’d say yes. The point of a Nucleus is to do no tinkering at all. That is why it is locked down.

People who purchase a Nucleus are spending the higher cost so that they don’t have to do any tinkering. Otherwise, they could have saved themselves many hundreds of dollars and just gotten an Intel NUC and spent 30 minutes setting it up.

Agreed. But I didn’t really ‘spend’ any money on the Nucleus. And I don’t think there’s much difference between what’s installed on a Nucleus and what you install on a non-Nucleus in terms of allowing you to make a change like activating that second M2 port, is there?

what’s installed on a Nucleus and what you install on a non-Nucleus in terms of allowing you to make a change like activating that second M2 port, is there?

Well, yes, the Nucleus runs RoonOS, a version of Linux that is stripped down and locked down. That means it only contains drivers for the hardware that exists in the Nucleus, AND, prevents the user from loading anything; drivers or otherwise onto the system.

So, it is built purposefully to prevent such tinkering because you cannot load any drivers. Hence, my original comment.

Okay, thanks for that. So, to clarify, you’re saying that if I were to install the non-Nucleus version of Roon OS on a non-Nucleus machine I’d be able to access the Roon OS and load drivers/activate that M2 port?

The opposite of that.

I understand Daniel to be saying that, because the Roon OS on the Nucleus is specific to the Nucleus that M2 port is inactive.

What I am asking/hoping is whether the generally available OS for use on generic machines would allow access to load the drivers etc to make Roon recognize that M2 port.

No it’s just a variant on the nucleus code, same restrictions.
You could use any other OS and just load roon server.

Nope, ROCK uses basically the same OS. The only difference between a ROCK OS setup and a Nucleus Setup is that the Nucleus version contains 1. logic to throttle the CPU for heat because there are no fans. ROCK relies on the Intel NUC Bios to control the fans. and 2. Nucleus OS contains the extensions to interface Control 4 which ROCK does not have.

I think your misunderstand is that ROCK is not for “generic” machines. It is for a specific list of Intel NUCs and only includes the drivers for those NUC models. It is not “generic”. And ROCK is still locked down.

That is why I said use a standard Linux build, or Windows and then just load the basic RoonServer package for those specific OS’s if you want to tinker like you are doing.

Brings us full circle back to: it’d be nice if ROCK (at least) recognizes the standard complement of M2 input ports on the recommended NUCs.

Well, you can always suggest that as a Feature Request.

Yes, it’d be nice. Think I will request it. Thank you both for your time. I have a few options for trying the Roon Server approach. If I get it going I’ll post here again.

I would not want to void my Nucleus warranty.

Then don’t. Or do it after the warranty period. But I bet there are lots of Nuclei owners who’d do it in a heartbeat. It’s really no different to installing any M2 board and then a few washers to slightly raise the cover to allow the thin fiber cable in.

Roon activating the second M2 port will be utterly transparent to folks like you. But to others it would make that investment in a Nuclei more attractive.

Folks like me. Please, we don’t need the condescending comments. I would not void my Nucleus warranty. That’s all.

My guess (from MOCK builds with PCIe slots) is you would need the card to be an Intel chipset and access to the bios to disable the onboard network chip.