Disable Roon Favorites [not on roadmap, but a different way of "collecting" content is]

tl;dr: Let users disable Favorites entirely and treat everything in Library the same. Roon has Library, Favorites, and Star Ratings even though most users, and almost all new users, would be fine with any one of them. This proposal keeps two and makes Favorites an advanced feature that’s disabled (heart icons/functionality not shown) by default. Full explanation follows.

Favorites is handy for people who want to spend a lot of time curating their Library, but it’s useless or even counterproductive for almost everyone else. The counterproductivity manifests as either confusion because it doesn’t work the way they expect and/or because they haven’t used it consistently (some stuff is just in Library, other stuff they like just as much is favorited because they happened to notice an empty heart icon during subsequent playback), or busywork trying to use it consistently.

The cognitive dissonance may be because it’s an artifact of owning music that doesn’t cleanly apply to having streaming access to basically everything. There’s a reason TIDAL doesn’t have “Library” as wel as “Favorites,” or “Favorites” (equivalent: Roon Library) and “Extra Favorite” (equivalent: Roon Favorites). For the vast majority of listeners, one level - whether it’s called a library or a favorite - is enough, and if it wasn’t, one wouldn’t create two unrelated constructs like Roon currently has. One would add more specificity to a single action (such as the existing star ratings, or choosing either “Love” or “Like”) because it’s way simpler for users to understand when they see the UI. No one would design two distinct systems, nor surface them in the UI in a way that doesn’t convey their relationship.

So, how about accepting that most people already don’t care enough to curate both a Library and a subset of Favorites, and making Favorites an option that’s retained for backwards compatibility and for people who want to turn it on? Let users disable Favorites entirely and treat everything in Library the same. I don’t need a heart icon or the related workflow. It’s an advanced user feature that users should need to discover and turn on, and relatively few (10%?) would.

This would also improve the new user onboarding process by deferring this part of the learning curve. Perhaps mention Favorites in an in-app message the first time a user’s library reaches 1000 tracks, since by that point they’ll understand the Add to Library workflow. They can make an informed decision whether

Bonus that this maps cleanly to TIDAL’s metadata, in that anything in one’s Roon library is favorited in TIDAL and vice versa, and Roon doesn’t have any extra local favorite that’s not synced with TIDAL. Not a good enough reason to do this, but a pretty nice bonus.

Finally, none of this is to knock users who do use Favorites. More power to you! It would still exist, there would just be an acknowledgement that most users don’t ever need it and almost no one needs it on day 1.

(Best case would actually be to retain Roon Favorites and eliminate the concept of a Library, so Library is everything in TIDAL and I can favorite/star from there – and Roon’s analyses would apply to all songs in TIDAL. However, I’m assuming that’s impossible or at least impractical. The next best thing, and it’s almost as good for a lot less effort, is to keep the Library more or less as-is and eliminate or let users disable favorites as a separate thing - ie, what I suggest here.)

Related: How are you using the Roon Library & Roon Favorites?, Tidal favorites are different than Roon favorites..?

Yes it does! It’s called My Collection. When you add an album to your TIDAL collection it’s added to your Roon Library. Simple concept.

If I like an album or track in my Roon library I may chose to mark them as a favourite. Whether I have a physical copy of the album is irrelevant; ownership doesn’t change my enjoyment of music.

Star ratings and favourites give us choice and it’s up to us if we use them. There’s really no need to hide them.

PS. You may want to move this thread to #roon:feature-requests. Simply edit the title and change the category.

The reason we added favorites is for the many users (most of Team Roon as well) with a large library of files that are filled with content they bought “back in the day”, but turned out to be “meh”.

You are making a big assumption that everyone is using “add to library” as a favoriting mechanism.

Anyway, we are looking at ways of addressing this better in the future, as streaming becomes more and more prevalent.

Also, star ratings are meant to be editorial in nature and we don’t really think of them like favorites/library.

The reason we added favorites is for the many users (most of Team Roon as well) with a large library of files that are filled with content they bought “back in the day”, but turned out to be “meh”.

That’s more or less my belief as well. It’s used by relatively advanced/experienced Roon users, and by people with a lot of local music they purchased (probably at album level). I expect there’s a fair amount of overlap between those 2 use cases.

You are making a big assumption that everyone is using “add to library” as a favoriting mechanism.

My assumption is sort of the reverse: that a lot of people - not everyone, but a lot of people, including almost everyone for their first few months and almost everyone without much local music - are using favoriting inconsistently and without knowing exactly why they’d want to. When they see a heart icon and something they love is playing, they click it, but they aren’t entirely sure what it does/why they do it, they don’t routinely play back just those tracks, and they wouldn’t miss it - and would understand the library better - if it wasn’t there.

To turn off certain tracks on certain albums so they don’t play when I play the album.

And the bad thing here for streaming users is that they have to add something to their library just to be able to tell Roon that they don’t (or no longer) want to hear it (triple state heart) – just because Roon Radio otherwise insists of playing it again and again.

5 posts were split to a new topic: Does Roon care about non-streamers anymore?

And the bad thing here for streaming users is that they have to add something to their library just to be able to tell Roon that they don’t (or no longer) want to hear it (triple state heart) – just because Roon Radio otherwise insists of playing it again and again.

If you use the feedback option of ‘i dont like it’ – It won’t play it for you again.

Anyway, we are looking at ways of addressing this better in the future, as streaming becomes more and more prevalent.

I appreciate that. My comment wasn’t that there’s one right way to use Roon, only that there are many use cases and one could expose those as options[1], expose them as choices later on, and/or tweak the default UI based on my library (imported local files vs streaming services).

[1]: Normally I’d be a bit reticent to suggest adding options to a UI, but Roon already has tons of preferences and adding one or two more to Preferences -> Library isn’t going to increase the user-facing complexity.

Yes it does! It’s called My Collection . When you add an album to your TIDAL collection it’s added to your Roon Library . Simple concept.

To see this firsthand, load TIDAL and navigate to an album screen. Both the heart icon and the hamburger menu -> Add to My Collection menu item do exactly the same thing. When you click one, the state of the other will change; for example, clicking the heart icon will make “Add to My Collection” change to “Remove from My Collection.” There’s no way to put something in TIDAL’s “My Collection” that isn’t hearted/favorited, they’re just (thoughtfully done) attempts to make that feature more discoverable. Some users expect to see a heart icon, some users expect to find a text menu item.

PS. You may want to move this thread to #roon:feature-requests. Simply edit the title and change the category.

I was just reminiscing about the problem of another user posted in the forum – sadly I’m unable find that thread right away (may be buried in the v1.7 feedback thread? I can’t remember.). It was about a specific album (I don’t know if it was a collaboration album or just contained a duet) that seemed to link an unwanted artist to the Roon Radio pool of songs of that user. I’m unsure if the Roon Radio feedback options are sufficient to resolve such a situation. 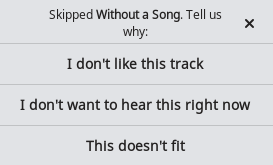 But it’s easy to ban an album or artist – but can only be done if the artist/album is in ones library AFAIK.

PS: As a non-streaming user at the time of this writing I’m not affected by this problem. Thus I don’t need a solution nor am I in the position to try out a proposed solution.

I agree about Roon favourites, but more that it’s current concept and use is confusing compared to its use in streaming services where it’s most used. Most streaming services use the heart icon as a favourite but they all use it to add music to your collection/library in that service in one press. As the op has said there is no further siloing of maybe a more favourite favourite. Heart it it’s in you library nothing more nothing less. You want to group your favouritest favourites you make a playlist with them in.

This is not the case in Roon , the heart adds nothing to your library it’s just addding a tag to it that its a favourite in an already favourite album you added. Not used this feature once in years I have had Roon. Not saying the feature is bad just never seen the need for it or why its more prominent than adding music to your library which requires a different approach.

Personally I would prefer the heart to do what it does in streaming services would be a lot simpler to add new music it’s pretty much a GUI given in music software that’s what it does why try and break this seems crazy, users won’t have to learn as much to get going. As many new users are coming from streaming apps.

Keep the feature of Roon favourites just execute it differently and perhaps maybe rename it to something more applicable that does not cause crossover confusion.

I hope the favorites icon never disappears.
I highly depend on it in order to filter (skip) tracks when playing an album.
Especially useful when playing classical disks with lots of tracks (ie operas, compilations of lieder, etc)
I could hardly use Roon Remote without the heart icon in the album display, in fact.
BTW the heart icon has disappeared in Roon ARC, and as a consequence my usage of this wonderful mobility evolution tends to be low…