In most pop & rock CD box sets, the only interesting thing in the disc number is the disc number, but once in a while, the compilers take the time to name each disc, often for a reason.

Off the top of my head, the four volumes of James Brown’s Star Time correspond to nicknames from successive phases of his career (Mr. Dynamite, The Hardest Working Man In Show Business, Soul Brother No. 1, The Godfather Of Soul). Mojo’s “Acid drops” set included volume names drawn from London drug dens or something.

As you can tell from these examples, the information is seldom essential to enjoying the music, but it often lends color or context. I wouldn’t mind having an optional field that allowed me to display the name of the playing disc.

I’d put it in the Version field.

[quote=“Chrislayeruk, post:2, topic:26347, full:true”]
I’d put it in the Version field.
[/quote] How would that help Chris? Version is not disc-specific.

The request is reasonable and noted. I too would like, for instance, to see the discs of Kate Bush’s Aerial labelled “A Sea of Honey” and “A Sky of Honey” respectively.

I think it’s been raised in another thread already.

I did this for the Chris Rea Blue Guitars 11 disc set allowing me to see the titles individually as it informs the musical style. Latin Blues, Texas Blues, Celtic `Blues etc.
This just helps me get quick access as a workaround.

I honestly don’t know what you mean. A picture would help.

Having said that, we at Roon are generally far more interested in creating better solutions than workarounds, so let’s not dismiss valid suggestions? 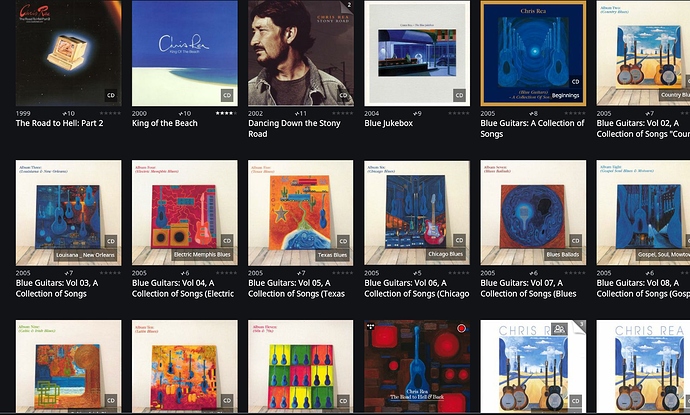 As you can see on some of the albums the full title is truncated so a version helps me in this scenario.

I see, thanks. FYI, I don’t think that splitting the sets into separate discs is an acceptable solution for everyone. We need something better.

Maybe the biggest problem would be how to show the disc title/description due to the lack of space; maybe a popup or something like these when you pass over the disc with mouse pointer or maybe it could be showed here 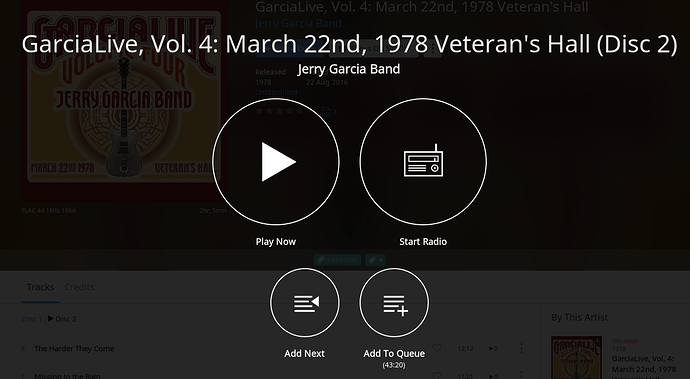 Here are some examples of three different case types. My personal interest is primarily in pop & rock, so all of these draw from that experience.

As mentioned, James Brown’s Star Time has four discs, and they have four names. Each of the four names represents a nickname that Brown had during a different decade of his career. 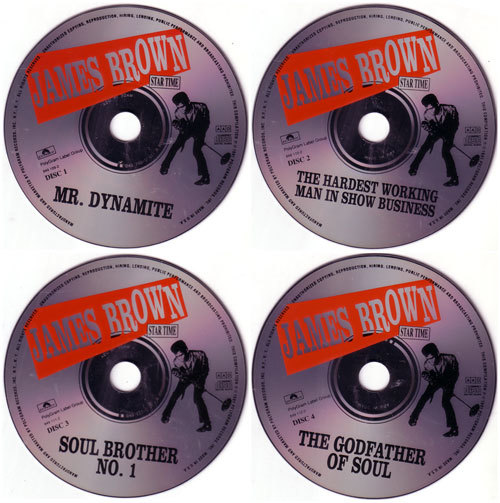 The five-disc set “Costello & Nieve” is a single unit, featuring music played by Elvis Costello and Steve Nieve on a 1996 tour. Each of the discs was recorded at a single stop of that tour and is named after the city and venue where it was recorded, so disc 1 is named “Los Angeles: Live at the Troubadour” and disc 3 is named “Chicago: Live at the Park West.”

The recent reissue of Sgt. Pepper is a four-disc set with three distinct components. Disc 1 is a newly mixed recording of the LP. Discs 2 & 3 are outtakes and studio banter from the era. Disc 4 is the mono mix of the LP and accompanying singles. Each of these three components has an identity.

In each of these cases, I might enter data into a field to keep the different kinds of recordings distinct as I browse.

The David Bowie compilations ‘Sound + Vision’ and ‘Nothing Has Changed’ are both multi-disc documents that are arranged chronologically. The only difference between disc three and disc two is that the music was recorded later and the listener has reached the end of a 74-minute disc capacity.

Miles Davis’ ‘Cellar Door Sessions 1970’ is a six-disc set of music all drawn form a (more or less) single time and place. Each of the six discs derives identity from the other five.

These are two examples, but there’s no shortage of either (a) chronological retrospectives or (b) single-recording deep dives.

In fact - not to be a pervert - I wouldn’t mind having a box I could check that would allow me to toggle between the existing view-as-discs option and a linear layout. Some large overview sets, like tee Miles Davis box I reference above, are more like one big bowl and I would prefer to see them in an iTunes-like soup-to-nuts layout, track one through track 62.

Would really love to have this feature. I have a (mainly) classical collection among which are several box sets. Beethoven complete Quartets, Haydn Complete Symphonies / Quartets etc. Just to mention a few. Currently the only way to find a particular work is to:

Rather than the discs being just a list across the screen, would a separate index page in a vertical format be a solution? Disc Number as a hyperlink and then a description to the right? Just as if you take the box off the shelf, look at the back and see that Symphony 77 is on disc 25? Attaching a description to each disc could be part of the disc / track reordering process. The decision to have an index page/screen could be a check box option.

And finally. Thank you to the Roon team for a seriously great product. As a way of browsing a collection (25,000 tracks), it is such a powerful tool and somehow we keep finding new and better ways to use it.

I wouldn’t mind having a box I could check that would allow me to toggle between the existing view-as-discs option and a linear layout.

There’s another use case here which is: you download a linearized version of an album and want it displayed as the original x discs.

Any news on this @joel ?

I have used a workaround on my local files and given the disks different covers so I can see what disk it is when playing, but as I now have a lot of Tidal albums as well this solution doesn’t work.

There are no box set solutions or improvements at present, not even support for discsubtitle, but hey if you have a recording location in your tags Roon will display that for each disc.

Have we given up on this idea? I have a 4 disc set of Brad Mehldau solo piano which is hard to organize

1 year later and 6 years after @Joel said, “we’re on it”. Still, nothing. No support for DISCSUBTITLE, no support for individual disc names or disc artwork, no support for anything that makes box set handling better. (Well, at some point you did make it so that one could see and tag all the tracks from all the discs at once. I suppose that’s something.)

The 1.8 “overhauled UI” release doesn’t even address the box set issue. If not addressed after a UI overhaul, then when will it ever be addressed?

Please, @support, if this is no longer on your radar long or short term, be honest enough to let us know.

There are numerous box sets where some kind of disc name would help. Another example is the Rolling Stones in mono box. It contains their first 15 US and UK albums, a number of them having same tracks. It’s hard to distinguish some albums without the fysical box or booklet. 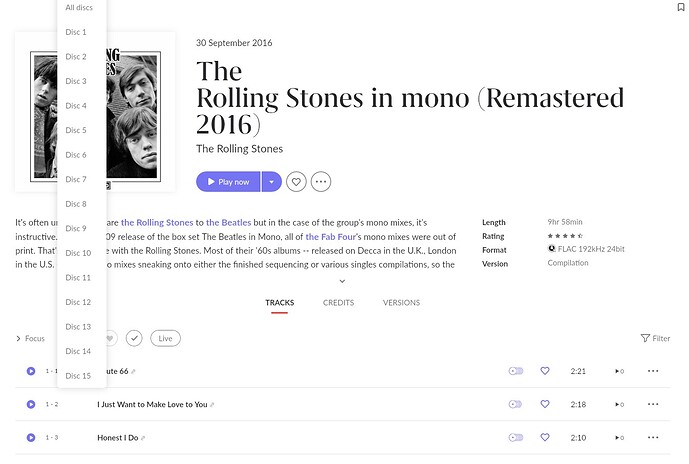