Does anyone know if it’s possible to default the album to the MQA version on the artist Discography view if a MQA version exists? It seems random at the moment with some albums showing the MQA icon and some don’t but when I drill in to the album and select versions a MQA version does exist.

I have attached screen shots of a Calum Scott single Heaven as an example. 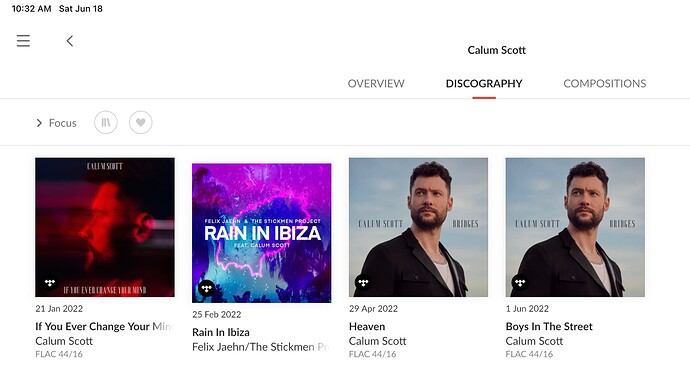 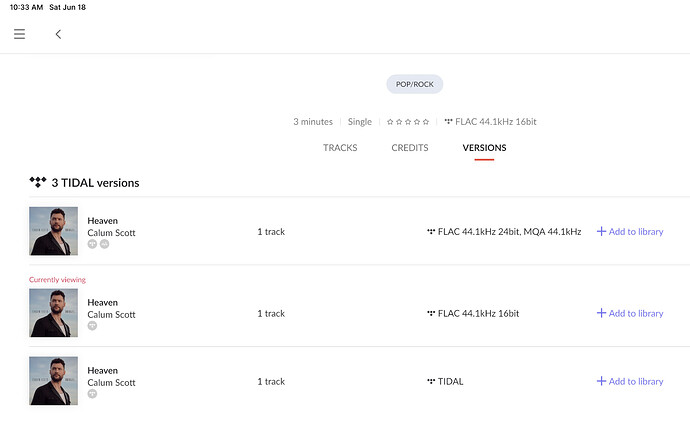 I think it should show everything an artist has done regardless if it’s local, Tidal, or Qobuz. Might be a good hint you need to switch or add another service.

Well it does show all versions on the drill down. Just trying to figure out if there is a setting I’m not aware of or if it’s a meta data problem.

I get both Tidal and Qobuz, but maybe because I subscribe to both. IDK.

No, this isn’t possible. The Discography will show all releases by the artist, depending on your settings. When you add an album, use the version tab to select the MQA release (if available.)

Note that Roon will display alternate versions, but not those considered duplicates. You can change this behaviour by using Merge Albums (Album Edit) and changing the Show hidden tracks and albums setting (General settings.)

Thanks @Martin_Webster. I will try some of these settings to see how the behavior changes.

Note: to merge albums, select them (right-click) and then go to Edit. Furthermore, when you add an album to your library, this is the preferred version. However, Radio won’t necessarily play the highest bit-rate etc., since discovery learns from what people play.