Discovery page loves Paul McCartney - me? Not so much

Last night a friend of mine and I were comparing each others Roon discovery pages and he remarked it always had Paul McCartney in there somewhere and sure enough, now he mentioned it I realised I was similarly afflicted. :-/

Now I have a few Beatles albums in my library but he’s far from the most popular artist (and genre) in there but still there he is trolling me. I assume this is some crazy AI madness rather than a superfan in Roon land that wants to spread the word of Sir Paul?

How many of you out there have this guy staring back at you?

I think someone suggested in 2017 - can we have a do not show in discovery ban…not a bad idea I think. 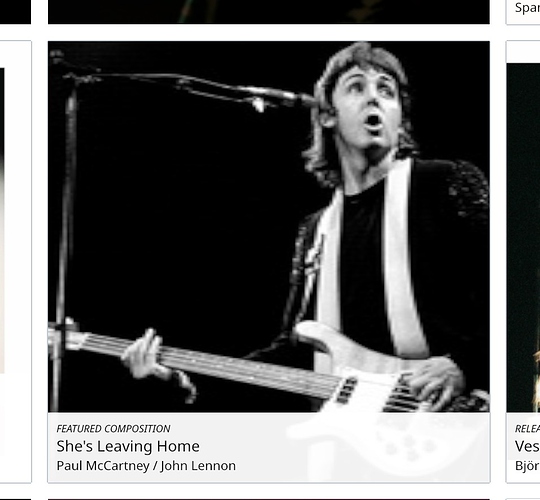 Please make him go away! 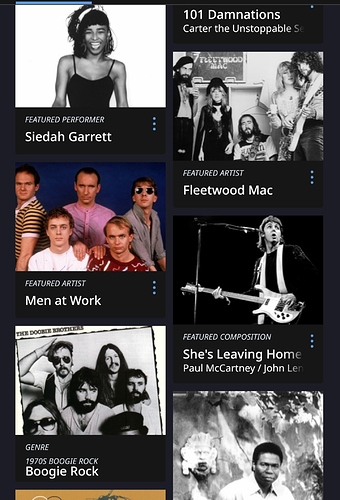 Oh God me too! And I also have few Beattles albums but never listen to them since I have my new set up…

As someone said this morning “Everybody thinks they should like the Beatles but no one actually listens” perhaps time to purge the library of all things McCartney?

I’ve noticed this too, he’s always there! Where’s John Lennon though?

I have all the Beatles and Wings albums. No Paul in Discovery. Perhaps you all need to branch out?

I’ve got all the Beatles albums twice, once in Tidal and once in Qobuz. I listen to them frequently. I was 16 in 1964. What a great year. No Paul in Discovery, but I did get the Jonas Brothers. WTF?

Just a new artist picture would be nice imo. That one is rubbish!

Yes, and the older you get, the more you appreciate where they took us.

Not only that, but this Covid19 lock-down has gotten me into an overly nostalgic mood. I’m just glad I’m still married (52 years) to my 15 year old sweet heart at the time. 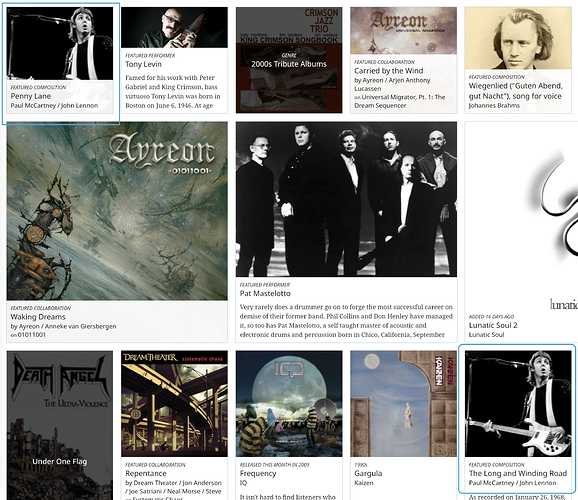 I did date a girl who was very much into the lyrics of the Beatles. Later she liked Free and Rare Earth and Mott The Hoople. Although not that commercially successful, the movie “Yesterday” gave a fanciful concept of the world without the Beatles. Again, I was never a fan, but I did like Rubber Soul, Revolver, Sgt. Pepper and Abbey Road. Actually, I liked “All Things Must Pass” better than any of their work except for the flip side of Abbey Road. But the world moved on, Michael Jackson owned the library etc. Personally, I do not care about photos etc in Roon. They could show Pantera. Son of Personally or Personally Part II, the pandemic taught me how to be ill and that I would suck at retirement. I like music, my work…and people with face masks.

I don’t use this feature much anymore, unfortunately.

I never use the Discovery feature, but I frequently use the Recommended For You feature. It seems to bring up a lot of artists and music I like related to what I am currently listening to.

It’s not that I don’t like the discovery page it’s useful, but it doesn’t seem to mix things up that much. I think in Mr McCartney’s case his tunes have been covered by so many artists, and even though as himself he doesn’t get played in my library he gets un-earthed more often than I’d like because of the weighting this gives him. And now I’ve seen it I can’t unsee the pattern!

I may have to purge him just to stop the madness.

A random Album feature (not tracks within an album) would also help ease the suffering.