Do we really need 'Go to Tidal version' in the album's main dropdown menu?

I noticed a new function in the album’s main dropdown menu, where you can also find the Share… and Album Edit… function. It is right at the bottom, where Edit… used to be. It drives me kinda nuts, because I use Edit… quite often, and I keep hitting the wrong button

If I have an album on my NAS, it appears in my library and I can play it. So why would I want to switch to the Tidal version? For SQ comparison? For making sure that an audible digital artefact is not a result of bad ripping but actually belongs there?

Okay, maybe you would use it to see if the Tidal version has exclusive tracks, but as far as I’m concerned, I can do without it alltogether.

Perhaps, other users do like it, so as a compromise - can it please be moved further up the menu order? Just below Add To Tag… would be great 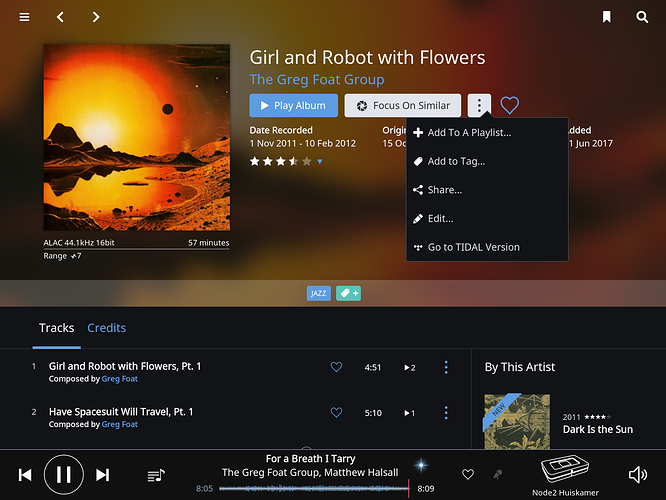 Maybe they are getting us ready for when MQA shows up in Roon as that may be a reason to choose Tidal over a local copy.

Also I think it’s great for artists I have bought a CD from. Yes I have ripped it and paid for it, but if I stream it, they get paid again. A boon for financialy stressed artists. Every little helps.

I use the go to Tidal version regularly and don’t want to see it removed or its position in the menu altered. (Sorry Mr Max

I opt for tidal if my own rips are mp3 (from years ago and when I haven’t got round to re-ripping). I do tend to add the Tidal version to my library but I still come across mp3 versions of stuff I own.

As previously mentioned, it’s useful for checking if there are different versions with bonus tracks etc.

I like the way you think, and if this was true, I would love the guys at Roon for considering it. But I’m a bit sceptical about this explanation. We’ve all seen the math. Artists need an immense number of streams to make a few bucks.

It should be Tidal (and Qobuz, and Spotify, and Deezer, and Apple Music and the lot of them…) to do something about this, not an external party that has integrated just one of those streaming services into their UI…

Good one! I never considered MP3, because my own library is 99,999% lossless and above. In that case, the Go to TIDAL version is in the best place

Another comprimise then: a dynamic GUI where I can set the order of these functions myself.

I get it, but if I don’t stream it, they get nothing extra, if I do, they do. Sure they should be paid more but then people, in general, don’t want to pay subscriptions thinking music is free. It isn’t. It’s only the top 1% (and that’s nothing to do with quality) that get rich. So, buy the CD and stream it anyway.
Just thoughts…

I must agree with Chris, we do need to support the Artists however minute the support. It’s like saying “I’m not going to vote cos it doesn’t do any good”.

Another good reason is that some of us are trying to build up Tidal collections in parallel to our physical collections, for times when we can’t access HDD’s. So this is a cool way to add whatever we’re listening to easily to our virtual collections (in fact it would great to have a * or something next to the Go to Tidal Version to indicate if we’ve already got the Tidal version in our library - and, thinking on it, how does Roon choose the Tidal version to go to anyhow, as often there are many different Tidal versions…hmmmm).

Positioning of the EDIT function is another matter. Better to have an EDIT button completely separate to the pull down menu. That would be good.

Not quite. There is only one chance to vote, so not voting is just plain stupid. Paying for music again by streaming it from Tidal is completely optional.

When I buy a cd or a lossless download, I already support the artist. Doing extra streaming for additional support is like buying another copy of the album

Which, by the way, goes a considerably longer way financially. I do that sometimes. When I have bought a download that I really like (on Bandcamp for instance) I also order the vinyl version.

I was trying to illustrate a similar ideology; ie it’s not worth streaming as the artists receive so little and I won’t bother voting as my vote just doesn’t count. Imho, they are similar. I should have said “it’s similar to saying…”

Having said all that, I tend not to stream, as a choice, as it’s still quite iffy in terms of consistency. I don’t like music cutting out on me

I was a bit surprised the first couple of times I hit the go to Tidal version when I was trying to hit Edit, muscle memory needs to be updated.
Why though when on the Tidal version there is no menu option to go to Library version? Seems inconsistent.