I haven’t seen anywhere that it does so assuming it doesn’t…but it’s why I stopped using Roon since I have multiple stereo paired HomePods.

It does. Streaming to my HomePod mini as I write.

It doesn’t. How many times do we have to explain why it doesn’t support airplay 2. AP2 is limited to iOS or MacOs devices only. If it won’t work across all platforms it won’t be in Roon, they are not going to silo off non apple users from using Roon on certain devices to appease Apple uses. All for one and one for all. Until it’s fully out as open source it just isn’t going to happen accept it. You can airplay to them now and can use DSP to stereo group them but airplay 2 is a big no no.

I am using an Airplay 2 Definitive Technology Studio 3D Mini soundbar as a Roon end point in my Great room and it works great. It shows up in Setup, Audio, Roon Tested.

Requiring a common denominator seems a poor reason not to support tens of thousands of speakers.

How many times do you have to be told this is incorrect. Many many devices and software do Airplay 2. There is zero reason that Roon can’t.

It is a poor reason and whatever the reason Roon doesn’t do it thats not it. Ah well no Roon renewal for me if they can’t or won’t support a basic feature that so many other devices and pieces of software do. Its in all of the products because they know their customs want it.

You fail to read and understand what I said or choose to ignore the facts.

AP2 is not limited to IOS or MacOS devices. Even my Marantz supports AP2: 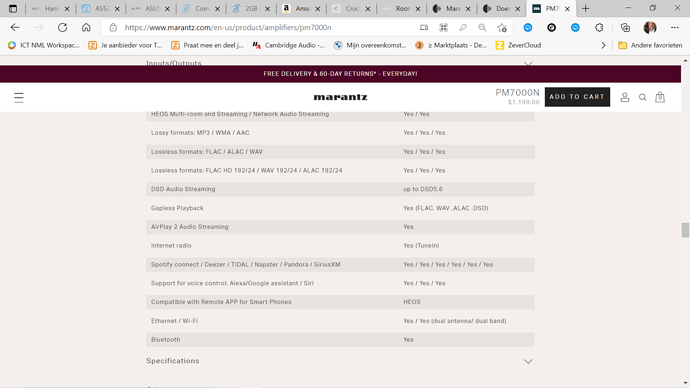 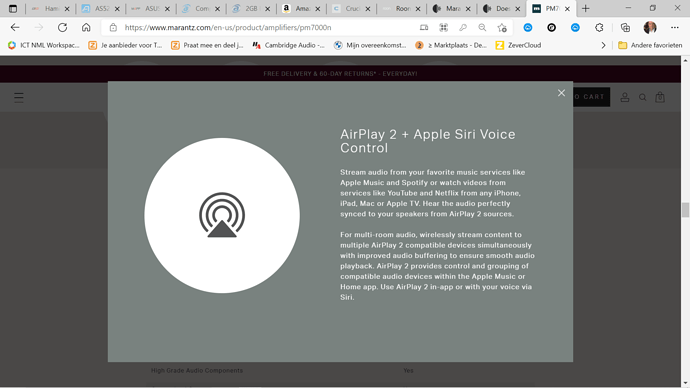 And many third party devices do. So there are enough reasons for RoonLabs to support AP2. Only setback is that AP2 apperently doesn’t support HiRes above 16/44.

Seems like part of the confusion is about devices such as amps, speakers, etc. that can receive Airplay 2, v. apps that can send Airplay 2 to those devices and the Apple API to enable it.

Can’t find any info on what has to be embedded in devices to receive Airplay 2. I guess the manufacturer works directly with Apple on that. But here’s what Apple says about their proprietary API that apps can use to send Airplay 2:

With AirPlay 2, you can wirelessly send your content from any Apple device to a speaker enabled with AirPlay or Apple TV. AirPlay 2 includes significant enhancements for wireless audio distribution, such as sending content to multiple AirPlay-enabled speakers.

So, it seems receiving devices can be anything, but sending devices must be Apple devices.

Its limited to iOS or macs as the senders, this is the imprtant part and limits then users to use such devices as remotes. Roon needs to be a sender not a reciever so this would not work for Rock, Nucleus, Linux or Windows users which are large part of the userbase. Their is no code SDK to allow you to send Airplay2 from none Apple devices. Roon uses OpenSource libraries for Airplay support, these are not yest in a decent state for Airplay 2 an still it only acts as reciever not a sender.

Try me again because I don’t understand what you are saying. I have Roonserver installed on my Asustor NAS (with SSD) and so is my music, my Roon remote is on my Samsung S20 and on my Samsung S5e and my music (also Tidal) is playing on my Marantz PM7000n through Airplay 2. And it works fine. I do not use any Apple devices as senders. So what do you mean with “open source libraries that are not in a decent state for Airplay 2”. Except for the limitations in HiRes with Airplay 2 I don’t have problems with Roon.

There is competing transport technology. Roon Ready or Tested is a brand that really supports many devices. What Apple very rarely puts really freely on the technical landscape is very limited and why would Mercedes suddenly put VW engines with dirty exhaust technology in new cars?

Your not understanding. Roon does not support Airplay 2 as I said in my previous post. Roon uses legacy airplay in your setup it relies on open source code to do this. Airplay 2 can only be sent from ioS or MacOs devices it does not work on any other platform and Roon does not send anything via Airplay 2. The receiver is your amp from Roon it is getting it via legacy Airplay not Airplay 2. Airplay 2 allows for backwards compatibility.