Just dropped today. I really wish I didn’t have to use Audirvana at all anymore

But it comes in very handy every Friday to Tuesday

It was somewhat frustrating at first before I understood that this is how it works. With that knowledge it’s easier to accept and understand, but at first I was sure there must be something wrong with my account or setup.

It’s a weeky thing. Last week Beyonce and Jay-Z’s release showed up in Roon after the Tidal 2-day exclusive period for that album.

It came to Apple Music and Spotify before even Roon.

We have other ways to listen to these big releases that are the talking points of millions around the world (most of the Roon Community probably don’t care and that’s obviously ok too).

But I do wish that every Friday to Tuesday I didn’t need to rely on Audirvana for new releases.

All of my friends know about this issue and laugh at this shortcoming. It’s a big reason they won’t sign up for Roon.

Younger people are really into big new releases and talking about them in real time, not 3 days later. And not interested in the credits and lyrics that Roon is fetching in these 1-3 days.

Roon already commented that there’s nothing they can do about it, which is unfortunate but is what it is.

Roon already commented that there’s nothing they can do about it, which is unfortunate but is what it is.

Hopefully this is something that Roon (with the help of Tidal, maybe) can fix or speed up in the future? Should be about optimisation and computer power. Preparing the database and crunching the data at a higher speed. At least from my limited understanding of how everything is fetched and organised in Roon.

I have a thread about it because it’s a weekly thing with big releases. Check out @brian ‘s explanation in there. There’s nothing that can be done unfortunately.

Hi Roon Team As you all know from all my glowing posts, I love all your work. And I know from posts buried in other threads that this request is being worked on. But I thought I’d capture it under a Feature Request anyway. I just woke up to messages from friends asking if I’d heard a new track that dropped overnight and that’s trending globally. I got up out of bed, put some clothes on, made a coffee, loaded up Roon and to my anguish it hasn’t shown up (did the services refresh and all, like…

Yeah I read your thread and his answer. But still seems to be a possible way to improve things in the future. I think Tidal gets at least some sort of noticeable synergy effect from its Roon users and could work on shortening, or maybe even remove, the lag times from their end. It would befefit both parties.

Yep all these same questions were already asked and the gist was nothing can be done.

The funny thing with the Yonce/Jay album is Roon took 3 days to fetch less data than Audirvana’s use of the Tidal API… @miguelito commented on this too.

And that’s a weekly thing too. Roon takes more time to fetch less useful initial data. Sure the lyrics and reviews will come day/weeks later and that’s great.

From my experience with software development these things get resolved or improved somewhere along the line. If not now then maybe in a couple of months or next year. If there is a need there is always an improvement to be made somewhere. So it’s mostly about seeing the need and allocate resources. Oversimplification ofc!

So it’s mostly about seeing the need and allocate resources.

Absolutely, this is obvious. I.e. if @brian listened to big releases this would drive him nuts on a weekly basis too and I’m sure it would have been sorted a long time ago. But I think he just listens to old stuff ?

All said in good fun of course. I love ECM and Keith Jarrett too.

Nah. I care, but getting it in lockstep with their API is just not possible.

Most of the delay is outside of our control–there’s about 25-30 hours (worst case) between when someone enters something into TIDAL and when we are able to start processing at the data.

Our processing is much smaller than that–more like 12hrs, and is regularly worked on to make it faster. We’ve sped out stuff by 2.5x over the past two years, and have plans to cut out a few more hours of processing over the next 6 months or so.

These aren’t the kind of problems that you just throw more computing power at, for the most part. They bottleneck on sequential data dependencies. The ones that parallelize well are run in parallel, but most of the work is not that way.

We’ve also been working on negotiating a better data transmission schedule with TIDAL that seeks to improve the general-case behavior by scheduling the dumps optimally within the day to avoid waiting during periods where metadata edits/additions are less likely. This is not in response to recent feedback…just something ongoing that we have been discussing with them over the past few months.

But in the end, the “make it the same as the Tidal app” goalpost is not something we’re going to be able to reach while maintaining the value-add that Roon provides. Just isn’t possible.

Our processing is much smaller than that–more like 12hrs

Thanks Brian. I don’t speak for all Roon users that look forward to these weekly big releases and I’m just one user like everyone else.

But if Roon were to have albums ~12 hours after Aurdirvana (Tidal API) that would be great.

As you know, the Yonce album took over 72 hours. Drake’s Scorpion is nearly at 24 hours now and still isn’t up.

Every weekly album I’ve mentioned in my other thread is past 24 hours.

Can you look into why these aren’t showing up within ~ 12 hours of Tidal’s API? On a weekly basis…

But in the end, the “make it the same as the Tidal app” goalpost is not something we’re going to be able to reach

Noted and understood - which is why I only reference Tidal’s API each time (Audirvana) not the Tidal Desktop App.

As per my dedicated thread on this issue - this is not a complaint. I’m just trying to help make the Roon experience bette.

As always, I greatly appreciate all the great hard work happening behind the scenes to improve the experience for all users.

I rely on the Qobuz app for new releases, it even filters for the genres I like. The Tidal app somehow doesn’t come up with all the new releases they have in store. Annoying…

Maybe you didn’t fully understand what I wrote–the expected number isn’t 12 hours, it’s 3-27hrs on TIDAL’s end + 12hrs on ours.

The Beyonce/Jay-Z album was a special case–we investigated and found that It didn’t show up in our data feed until Monday night for reasons which, while totally outside of our control, I can’t go into in public.

Maybe you didn’t fully understand what I wrote–the expected number isn’t 12 hours, it’s 3-27hrs on TIDAL’s end + 12hrs on ours.

I definitely didn’t understand. Now it’s clearer and I feel a little sadder

Anyway, no point going in circles.

You’ve made the timelines and reasons crystal clear now. It is what it is and hopefully someone’s process (who Roon depends on) changes along the way to help things at our end (the Roon user’s end) later.

I just thought it was strange because “The now now” by Gorillaz which had the same release date has already shown up on Roon.

Actually the Gorillaz album has been up for a week now but only half the tracks of the album.

New Gorrilaz. Half the album (full album to be released next week) is out

Only today is the full album playing. Yesterday it was still half the album.

But now the timeline is crystal clear as to why you should allow up to 40 hours for any new releases to show up in Roon. Some do come much quicker of course (‘up to’).

If someone can’t stream from Tidal’s native apps to their endpoint, it’s worth getting mConnect Player or Bubble UPnP or Audirvana if your Roon endpoint also supports UPnP (if you’re interested in timely listens of new releases).

Sad to still be relying on UPnP (first world problems of course) but it is what it is.

If Qobuz or Deezer or whoever come to Roon and work better in this regard and we can get down to 12 hours or less… happy days. Fingers crossed

Scorpion is still not up. Well past the 40 hour mark. 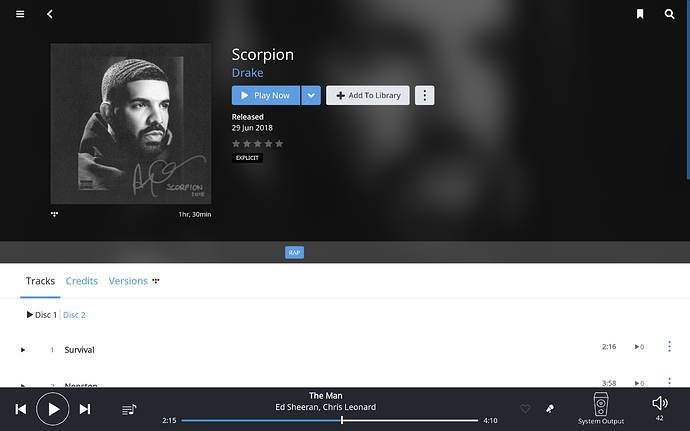