Soon after getting Roon I purchased an album in DSD 5.6 but Roon would not recognize it. Does anyone know if that has been fixed? I know DSD 5.6 is overkill but I am curious if Roon will now play it. Thanks.

DSD 5.6 is just double rate DSD and Roon will play it as long as your hardware is capable of playing it. If not it will downsample it to a value your hardware recognises.

When you say “doesn’t recognise it” what do you mean? Roon is not seeing the file at all and it us not showing up under albums? Or, that it is not playing the file?

To the next post, “not recognize” means not in the library.

I just checked “Focus” by format and all I see is DSD256.

What file format is the album in?
“Roon also supports uncompressed DSD64, DSD128, DSD256, and DSD512 content in the DSF and DFF file formats.”

I just tried it again. Album is Organ Great Classics on the 2XD label purchased from Acoustic Sounds in DSD512. One file name: “11 - Toccata.dsf”. Does not show up in the Roon library. Focus by Format tops out at DSD256. When I browse for DSF in Focus the album shows up as DSD256 so it is downsampling somehow. Sample Rate Conversion in Roon is turned off. Native DSD Processing is enabled.

I am using an UltraRendu connected to the Oppo HA-1 so signal path should work for DSD512. Server is a NUC i7 but my SonicTransporter i7 will be back from repair tomorrow. So, what am I doing wrong if others can play native DSD512?

Just checked signal path in Roon. Shows Source as DSD256 (which should be 512) then Sample Rate Conversion 11.29 to 5.645MHz, then Sigma-Delta Modulator as DSD128, then the ultraRendu then USB output to the HA-1. Odd.

Hmmm. Looked at Device Setup for the ultraRendu and it shows Max Sample Rate (DSD) as Up to DSD128 so that may be the culprit. But it is advertised as DSD512 compliant.

it shows Max Sample Rate (DSD) as Up to DSD128 so that may be the culprit. But it is advertised as DSD512 compliant.

Now THAT is some serious marketing mumbo jumbo.

It works with Windows drivers but is resorting to the limitations of the machine the core is on.

You say above that the album does not show up in Roon Library, but you can Focus on it and there is a Signal path. Those things seem inconsistent. If the album was not in your Library you could not Focus on it or play it.

Are you seeing the album in the Roon Album browser ?

The specs for the Oppo HA-1 say it can receive up to DSD 256 (native mode only).

What DSD Support Settings do you have for Roon Ready in the MySonicorbitor Software in the ultraRendu ? It should be Native DSD as per below for the Oppo to see DSD 256. I suspect it may be set to the default DoP, which tops out for the Oppo at DSD 128. 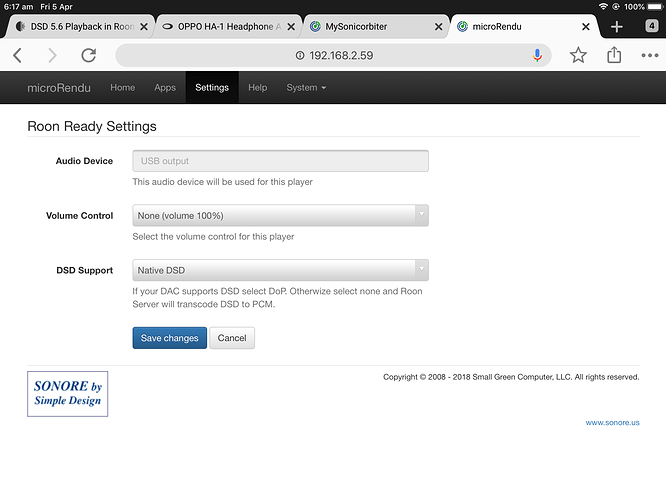 If so and you change the Roon Ready DSD Support setting to Native DSD then you should be able to play this DSD 256 file to your DSD 256 capable DAC.

This is what I see on their website for Organ Great Classics:
Label: 2xHD
Genre: Classical
Category: DSD (Quad Rate) 11.2MHz/256fs Download

Do a sort on Quad Rate DSD and you will see it.

Also referred to as DSD512 because the sample rate is 512 times that of CD, and is also sometimes called DSD8. It has a sample rate of 22.5792 MHz (512 times that of CD), or alternatively 24.576 MHz (512 times 48 kHz). Hardware such as the Amanero Combo384 DSD output adapter, and exaU2I USB to I²S interface, and software such as JRiver Media Center, foobar2000 with SACD plugin, Roon, and HQPlayer are all able to handle DSD files of this advanced sampling rate fully natively.

Thanks, got it straight now.

It’s confusing I know. I had to make myself a cheat sheet.

How does it sound ?

The recording is very well done as is to be expected from 2xHD although I have other organ albums with more prominent bass from the 16’ pipes. I don’t think this organ has 32’ pipes, at least I have not heard them. As to the performance, done very well except for Organ Symphony No. 5 in F Minor, Op. 42 No. 1 is played slower than I prefer.

BTW, I have an Oppo Sonica DAC in another room that does DSD 512. So, that is the one that I was thinking of when I said HA-1 at 512. I kinda went overboard prior to Oppo closing out their DACs and 'phones. I have three HA-1s and two Sonicas in the house along with three pairs of Oppo PM-1s. Way overkill for ears of my age, but they do sound very nice!!