Greetings! Not to beat a dead horse as I know we have had lots of discussions on here about DSD 512 and various DACs. I was under the impression that I could achieve DSD 512 up sampling by using HQ player on a Mac using my Sonore Ultrarendu and my Oppo 205. The Mac is connected to my router directly via ethernet and Ultrarendu is connected directly to the router via ethernet and then a USB cable into the Oppo 205s ayncronous USB port. I have no switches in the network and ethernet runs are all very short 2-3 ft. I have the HQ player settings on 44x512, but no matter what I set them to I am only seeing DSD 256 on both HQPlayer and Roon. What am I doing wrong? See screenshots of my settings. 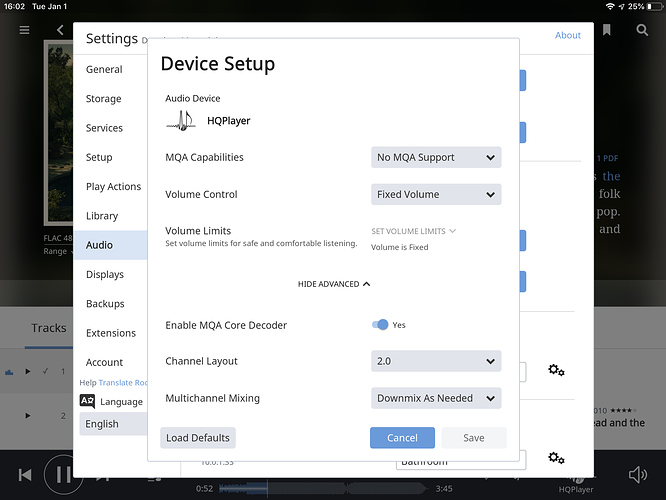 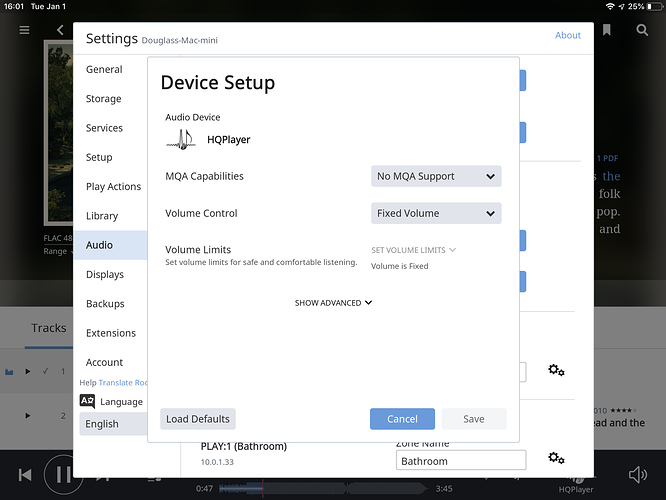 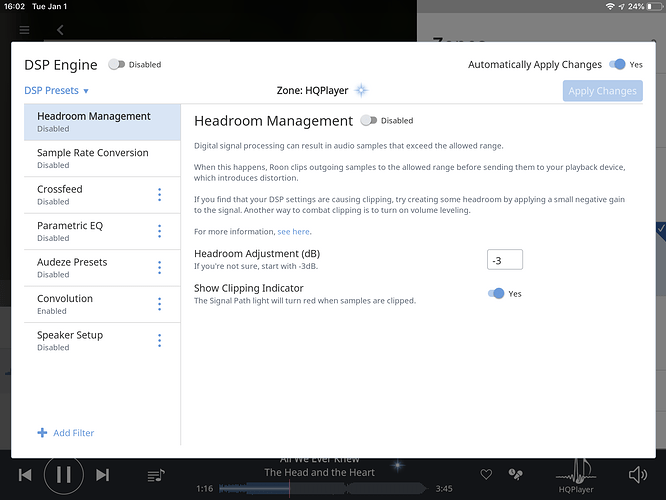 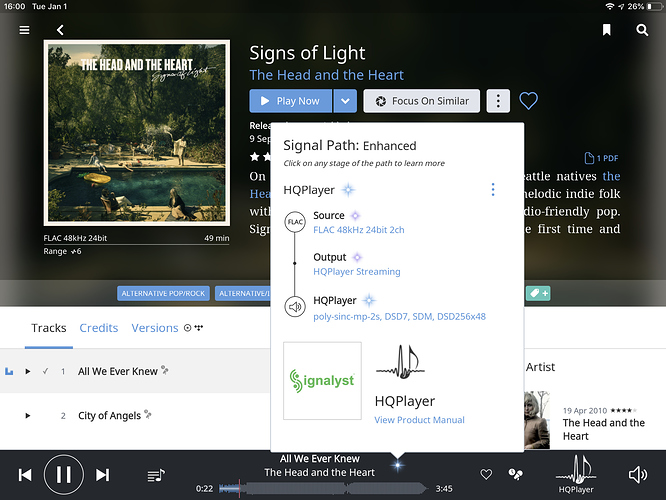 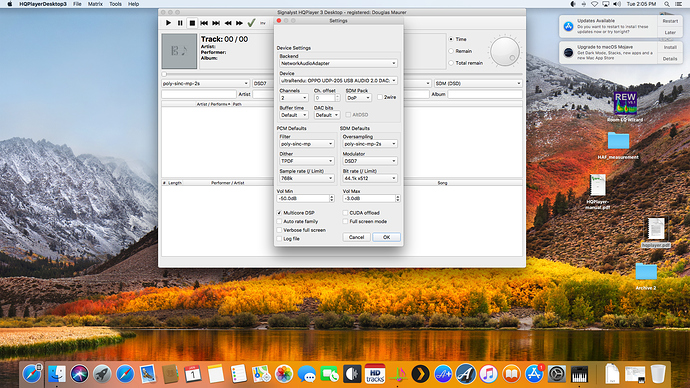 I see you have DoP set in HQ Player. Maybe uncheck that?

Hi Jesus! I tried that a few times and just got horrible white noise when I hit play!
Thanks
Doug

Thank you! That must be the issue then! it’s just interesting that their own website says it will do DSD 512. Seems like bad advertising or am I missing something! https://www.oppodigital.com/blu-ray-udp-205/
Thanks
Doug

I see that and it is in conflict with what is in the manual. Have you tried DSD256 just to see if that works?

Yep that works great! I think Roon upsampling to DSD 256 may sound better than HQPlayer doing DSD 256 by a hair which is why I was trying to get DSD 512 upsampling to work on HQPlayer to see if it would nudge ahead of Roon 256!
Thanks
Doug

Use a 44.1kHz music to test your setup without using DoP, not 48kHz. Some upsampling algorithms may be limited in some ways with 48kHz multiple to 44.1kHz multiple conversion, and many DACs do not like DSD x48 rates. Your HQPlayer setup also seems to indicate 44.1k x 512, not 48k x 512 as a maximum - but I’m not familiar with it to say for sure it’s incorrect for upsampling from 48kHz.

Your signal path shows that your DAC can do DSD256 x48, but that does not imply DSD512 x48 must work even if the product specs say it supports DSD512, because DSD x48 is somewhat non-standard.

If you have a Windows PC, you could also try this official Oppo DSD512 HQPlayer setup:
https://translate.google.com/translate?sl=auto&tl=en&u=https%3A%2F%2Fwww.oppodigital.jp%2Fsupport%2Fdsd-setup-guide%2F

Use a 44.1kHz music to test your setup without using DoP, not 48kHz. Some upsampling algorithms may be limited in some ways with 48kHz multiple to 44.1kHz multiple conversion, and many DACs do not like DSD x48 rates. Your HQPlayer setup also seems to indicate 44.1k x 512, not 48k x 512 as a maximum - but I’m not familiar with it to say for sure it’s incorrect for upsampling from 48kHz.

Good idea to try - but “auto rate family” is not selected, so everything should be forced to DSD512x44.1k

Doesn’t hurt to try though.

If you have a Windows PC, you could also try this official Oppo DSD512 HQPlayer setup:
https://translate.google.com/translate?sl=auto&tl=en&u=https%3A%2F%2Fwww.oppodigital.jp%2Fsupport%2Fdsd-setup-guide%2F

Thanks all for the help. Unfortunately even when I’m selecting 44.1 x 512 With or without DOP selected,I am still getting White Noise. I don’t have access to a Windows computer but I do have an old parallels accounts that I would have to upgrade so perhaps I could run windows on my Mac and try 512 upsampling that way. That may have to be a weekend project.
Thanks
Doug

There is a known issue with the Oppo UDP-205 USB chipset that can cause a loud static white noise to be outputted from the device when changing audio formats. Oppo is aware of the issue and have told us they are investigating. You will not be able to stream DSD512 to the device without native DSD support enabled, the device is limited to DSD256 via DoP.

OK thanks I appreciate that information john. Seems like I am stuck at DSD 256 as when ever I try out 512 I am getting the wild White Noise output. I have tried using the Roon DSP for HQ player zone set at DSD 512 with native DSD checked and DOP in HQ player OFF and I still get white noise. I have also tried it with the Roon DSP disabled for hqplayer zone and just use the HQ player interface set for 44x512 and still get white noise. In those situations I do see the HQ player interface showing output at 22k/DSD 512 but still only get noise. When I set everything back to 256 in Roon and/or HQ player I have no problems. 256 sounds great but I was hoping to try out the magic of 512.
Thanks
D

I have the same setup.

You can do DSD512 native with the 0112 DAC firmware.
This is no longer possible with the 0118 firmware.
I am beta testing the new firmware (0119), but so far the problem remains.
Perhaps Jesus from Sonore could help us on this.

Didn’t they drop the ability to do DSD512 native at the same time they enabled MQA. I seem to remember them citing it was going to be case of an either or, but, I don’t remember their reason.

Didn’t they drop the ability to do DSD512 native at the same time they enabled MQA.

iFi did that, but I was not aware of Oppo doing the same. The reason is processing limitation in the XMOS chip they use:

iFi audio MQA all across the board - IT'S HERE!

28 minutes ago, Norton said: No Im guessing you are fine with the iFi. Audirvana should be doing the first unfold to 96KHz (which is what your midi setting is telling you) then your DAC is doing a second unfold to 192kHz. Your Audio Midi doesnt tell...

For other readers, thread UDP-205 doesn’t accept “DSD native” from ROCK
is about native DSD no longer works on Linux after updating to new USB firmware.

@Douglasmaurer perhaps you can try downgrading firmware to 0112 to test native DSD512 if you do not care for MQA?

Thanks everybody for the help! I finally had some time tonight to try out different settings and roll back the firmware 0012. Now I am able to upsample to DSD 512 on both Roon and HQ player. Unfortunately you lose the Oppo’s ability to decode and render MQA, but at least Roon still can do the first unfold. Hopefully Oppo will be able to introduce an updated firmware that will allow both 512 upsampling and full MQA capabilities!
Doug 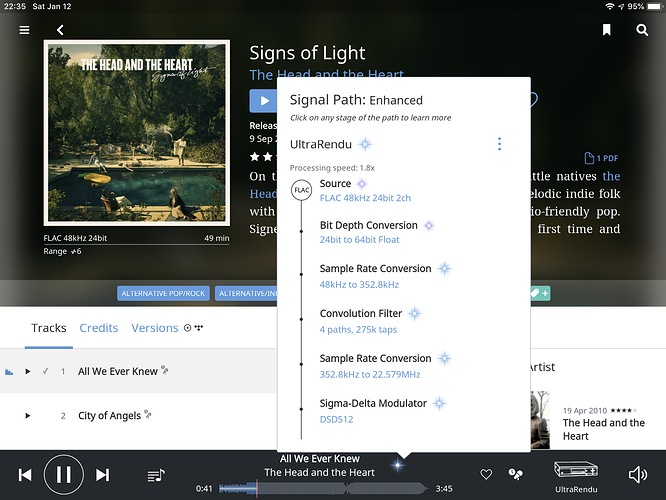 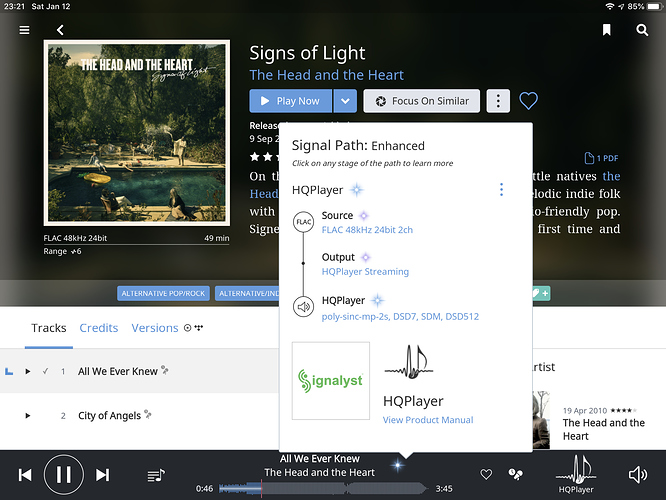 As you might have seen, Roon 1.6 seems to have addressed some of the problems we were facing with the Oppo 205.

I will check later.

That is good to hear! I may try to update the DAC firmware again w/0119 later this week or weekend if folks report that things are better!
thanks,
D