I must admit to a limited knowledge of anything DSD, and while my needs are few – I only have three DSD albums in my collection – I would like to get them to play properly.

I have a PS Audio Directstream running Yale. The DS is specified to handle DSD 64 or DSD 128. The DS is fed by a Mac Mini running RoonServer and HQP 3.12beta. Everything is fine on the Redbook/PCM side.

If I try to play a DSD album using Roon/HQP, no sound is output. Roon appears to be trying to handle the file, but I get erratic behavior. The scrubber will show 1 second of play, then zip through and stop. Other times, it’ll move from one song to the next, then stop. Once last night, when I shifted off of attempting to play DSD to my ‘normal’ collection, the audio output was played half-speed and distorted until a reboot of the Mac Mini cleared it up.

I can play these same DSD albums if I use PureMusic/iTunes.

So, basically I have no idea of what’s going on, how things should be set, or why the DSD files won’t play.

Any help would be most appreciated,
Rob

Try poly sinc 2s. The one without ‘2s’ requires more processing power than what the mac mini is capable of.

Still no joy. I changed the default to poly-sinc2s with much the same result.

Just for grins, I switched Roon’s output back to my usual PS Audio output zone, getting an interesting message when playing the DSD: “Transport: Playback has failed due to playback parameter negotiation with the audio device.”

That’s probably to be expected.

But I still can’t seem to find a way to get DSD to play.

Resampling DSD requires a lot more CPU than transcoding PCM > DSD. I have HQPlayer set to pass through DSD “unmolested”; i.e., just play the file, don’t try to resample it.

This only affects DSD playback, so your PCM sources will still be transcoded to DSD.

I can play the same DSD files with Roon alone or in HQ Player itself. Not when they are combined. Im still looking for an answer to my problem.

Update: I have gotten DSD to play through Roon+HQP. As a byproduct, I’ve found that upsampling everything to DSD128 sounds good.

@Rob_Hanson: can you explain to me why you want to use HQPlayer in between Roon and the PSAudio DS? My Mac Mini with Roon sends bitperfect files to my DAC (Chord QDB- 76 HDSD) perfectly. And like my Chord your PSAudio does all the upsampling for you, while at the same time reducing jitter. Why put something in-between??

First, I have usually fed the Directstream upsampled music from iTunes running through PureMusic. I’ve always liked the result. iTunes direct doesn’t cut it, nor does iTunes running non-upsampled through PM.

The difference between “bit perfect” Roon and iTunes/PM is night and day, with the advantage to the latter.

Running Roon through HQP comes close to PM, but not quite there. I’m still playing with filter settings.

I understand what the PSA Directstream does. But in my system and to our ears, there are clear and obvious differences. Why that is so will likely remain a mystery to me.

Also, Jussi (HQP) has remarked on many occasions that if one chooses to upsample – and I do – then it is better to do it on the more powerful processor rather than relying on the less powerful DAC.

After overcoming a lot of obstacles related with the installation of Roon, I am now testing it with HQ Player and without it, thru a Direct Stream with Bridge II that traditionally used Jriver via RJ45, everything seated on a Mac Mini and controlled thru a Surface Book. Up to now (I started yesterday) I could not announce a clear winner regarding SQ. However, there still a weakness which works against the Roon/HQP combo: its instability and the necessity of manually change settings to hear native 24/96 or 24/192 files (the latter if you are converting the rest of formats to DSD).

Interesting. At this point, I don’t mind the inconvenience of the interface or some of the instabilities. I figure that those things will get ironed out over time.

I’m still trying to get the SQ of Roon/HQP up to the standard I’m accustomed to, but even if I don’t get there, it’s close enough. The advantages of Roon with Tidal integration – opening a world of exploration – is too compelling for me. So, for now at least, if I want to explore, it’s Roon/HQP. If I’m sitting in the sweet spot, I’m more likely to go with iTunes/PureMusic.

@Rob_Hanson. OK, clear story. You like the upsampling of PM better than that of the PSA Directstream. Although in general I do agree with Jussi, I would have guessed that the Directstream has more than sufficient processor power. I think it’s rather the differences in algorithms. Thanks for your explanation.

I think it’s all about the algorithms. I’d love to know what PM is doing to the signal.

I use, since a few days the combination Roon and HQPlayer. I am quiet familiar with HQP, because it is for a few years my favourite player. Roon is on a wireless iMac, HQP on a dedicated windows server 2012 machine (i7), which is connected to a lampizator dac. I play DSD natively, so no use of dop.
My favourite filter is closed form, because it gives me a lot of depth. Playing that way directly through HQP wasn’t a problem. With Roon on a different machine that configuration won’t work all the time. Mostly it is working the first run, but by changing songs it stops working. I think it has to do with the network traffic that it is generating. Changing the filter to poly sinc -2 and DSD5v2 works very well.
Because I am lazy I don’t want to change HQP settings when I switch from DSD to PCM. So I upsample all PCM to DSD. With the ‘closed form’ filter it gives a brilliant result, however… I still like Bug Head Emperor a bit more in playing PCM. Sometimes choises have to be made

I am very satisfied about Roon, especially for all my classical albums which are finally shown as they should.

I can’t agree with this. I am using Roon and HQPlayer with my ultraRendu and DirectStream DAC and have found no other setup that sounds as good, much less better.

What are your favourite HQP settings with your DS DAC? Can you share a Roon signal path.

I am upsampling all PCM content to 24/352.8k. My favorite filter so far is poly-sinc-mp but I have been listening to both poly-sinc-short-mp and poly-sinc-xtr-mp. I am using NS5 for dither. Here is my current Roon signal path: 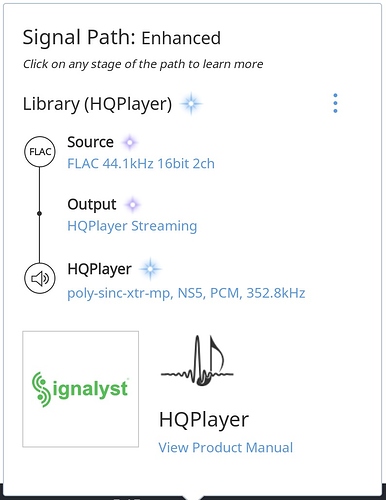 After testing a bunch of filters, I am liking the poly-sinc-short-mp filter with the NS5 dither. I am going to stick with this setup for a while, maybe a couple of weeks, so I can get fully used to the sound. Then I can try some other filters again just to make sure I have the best sounding filter setup for me and my 2 channel system.

I do have to say that using Roon/HQPlayer Embedded with the ultraRendu as an NAA to the USB input of my DirectStream DAC is a step up from using the Bridge II card as a Roon Endpoint. It’s not a small step up either. There is no going back now.