I’ve just received the new Musical Fidelity M6SR DAC and I’ve been testing it out using my RopieeeXL on a Pi 4. This new DAC now supports native DSD (not that I’m bothered about if it is native or DoP after reading up on it here). As I didn’t have any DSD files to play via Roon I downloaded a free song in various formats including 64 and 128 dsd. (Keith Greeninger-close to the soul) I have then been playing these various files back via dlna on the ropieee.

I seem to have 2 issues.

1st is that if I turn off DoP for dlna playback Ropieee cannot seem to send the native dsd and the dac shows the dsd 64 & dsd128 files as 384 kHz flac files. I assume this is due to there not being a driver in ropieee that supports this brand new dac so the files are being transcoded…

2nd is that if I turn on DoP for Dlna in ropieee and try these 2 dsd files the decoder does indeed show them as dsd files however the playback of the file seems to have increased speed… these files (along with there 96/192khz flac counterparts) all sound the same when the dsds were being converted when It couldn’t handle the native. But if you send them DoP they sound like the song is on helium!

Has anyone got any ideas why this may be happening?

So, does it work properly via Roon?

Done more investigation today. I loaded the files and played them via Roon.

On my Chord Qutest it worked fine (over DoP) but on the M6sr DAC it ran fast. Roon also didnt allow me to select ‘Native’ streaming so i couldnt test if that would have been different.

Its like the internal clock speed is too fast for DSD files.

Do you pass this kind of information to the DAC when playing DSD?

As i say it is a brand new incarnation of this DAC that only came out last week. So it could be a firmware glitch. one thing im going to try later is playing to it via Windows using the supplied USB driver. See if that works…

However with regards to Ropieee and DLNA - This DAC does support Native DSD so i assumed i would have got audio if i switched off your DoP switch. But playback (im guessing from the BubbleUpnp App i was streaming from to Ropieee) is transcoding it into a 384 flac file.

I have sent an email to the UK distributor of Musical Fidelity regarding the Roon DoP fast playback. Especially as this is their first DAC advertised as ‘Roon Tested’.

OK…well I connected my laptop to the dac and installed the asio drivers and used roon to output natively to the dac… and I’m still getting the pitch/speed issue. On timing a track playing via dsd over 100 second period the track showed as 108 seconds…

It seems this must be an issue with the DAC if using their own driver is still causing it.

I will email them again with my findings.

If you could look into why the DoP in ropieee isn’t working for dlna that would be great thanks Harry.

Really appreciate your product and the work you do.

Update if anyone else has this problem.

Its been confirmed by Henley Audio (Musical Fidelity UK distributor) that this is a fault with the new M6SR DAC.

Im waiting on an update as to whether i can update firmware or return the DAC for a replacement when MF Austria have fixed the problem.

Hi, do you have any news about that? I have for testing M6SR DAC, but have the same problems. Both DoP and also DSD native play a little bit faster and all man voices sounds like 15 years old boys. If I setup convert to PCM, all works perfectly. If there was any option to update firmware, it would be very good. Thanks

No, the UK distributor of MF has told me this cannot be fixed with driver updates. I think it is just a case of having it replaced when a new version is released. I will contact them at the end of the year for an update.

I would have returned that and demanded a full refund months ago.
That’s SHAMEFUL on MF part to release it as such and NOT fix it after all this time.

To be fair to Henley audio they offered me that many times however there was no alternative from MF that would fit the other M6 kit I have. I have an M6sPRE, M6sPSX, m6 Vinyl and the m6srdac.

Luckily I subscribe to qobuz and don’t have.many DSD tracks so the issue hasn’t been too major.

So I said I was happy to leave as is until a replacement is released at which point hopefully I will get a reasonable discount off a replacement. I cannot complain with the quality of the Dac in any other way. I have a chord Qutest in my study and this blows the qutest away IMHO. 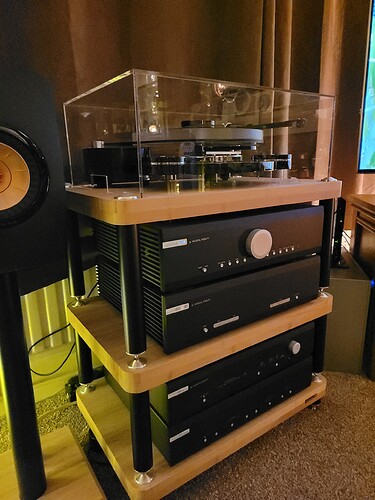 Sounds like a great dealer who offered to do the right thing by you.
Still not a good advertisement for MF though IMHO.

this cannot be fixed with driver updates

DAC firmware must internally select the proper clock for playback. A wrong selection of clock in the DAC firmware (not a user error) will yield the symptom you described. Normally if this is to be fixed, it would have to be done in the DAC firmware - assuming they got fixed and the firmware can be field upgraded by users (not always true).

This speed / pitch problem is not caused by Ropieee or Roon.

‘This speed / pitch problem is not caused by Ropieee or Roon.’ - Agreed - this was originally posted here as at the time i wasnt sure of the issue.

‘Normally if this is to be fixed, it would have to be done in the DAC firmware - assuming they got fixed and the firmware can be field upgraded by users (not always true).’ - I asked if this was an option however i was told this was not possible. Whether this is true or it is purely that the amount of users who have identified this issue is so small that they dont see it worthy of the costs that would be incurred and it is cheaper to offer a refund i dont know.

As i say, i was offered a full refund by Fanthorpes (who i purchased my kit from) and Henley (the UK MF distributor) and i chose to keep it so i cannot complain from their side of things at all.

I am surprised more people have not found this though. I know DSD isnt as popular maybe but when i spoke to Henley a few months ago i was told I was the only person that had identified this and MF were not aware of it until i contacted them.

Hi, we are 2 people here. I can write them, but I am not sure if it really helps

. My default setup is on HQPlayer “convert to PCM” and everything works perfectly. I have possibility to return and refund, but the quality of the DAC is so high that although I have a large DSD collection, I kept it. So The best solution would be firmware update, that I can make myself at home

Looking at building this exact setup in silver. I notice that some 6sr dac’s have micro usb input snd others have the larger type b usb input. The one I am looking at purchasing has the larger usb input. I wonder if this is the updated model with the DSD problem fixed. Does yours have the micro USB input?

I would say it is an amazing sounding system as a whole and as long as you dont mind about the lack of Native DSD i would heartily recommend it.

I might be able to live without DSD. How does it do with Roon? I will be going from Raspberry Pi USB into M6sr…

Thats exactly my setup - works perfectly. I use Roon and Qobuz for a lot of my Hi-res content.