Why can’t I play native DSD128 without PCM conversion, even though my Auralic Vega support it?

One thing that got in the way of playing DSD on my system was grouping that zone with another of different capabilities. Also, I think the Vega only supports DSD on the USB input, and not any of the spdif inputs. Otherwise, DSD plays perfectly for me, up to DSD256 since getting my firmware update.

I play DSD128 on my Vega. Make sure to select DoP in the Roon DSD audio settings for the Vega.

What are you using as your Roon endpoint to stream to the Vega? Maybe that’s the limiting factor. For example, I think a Logitech Squeezebox will only support DSD64. I switched out my Squeezebox streamers for an Auralic Vega and a couple of Cubox streamers, to get higher DSD rates.
The only other thing I can think of is in the Audio tab of Roon Settings there is a place where you set settings for the zone where you specify the maximum DSD sample rate. On the zone with the Aries/Vega combination it didn’t limit the DSD rate by default, and I did notice it recognised the increased capability to DSD256 after I had my Vega upgraded, so Roon seems to do a good job of recognising and adjusting for changes in capability, so there’s a good chance something else is limiting your capability, and I gather Roon can only transcode to PCM, and not to lower DSD rates on the fly.

I’m using a SOtM sMS 1000 SQ Windows Edition.
When I play DSD 64 it plays native dsd, but when I play DSD 128 it shifts to pcm conversion.

There must be something that causes Roon to think the maximum data rate is 192 khz, and since DSD128 requires a data rate of 352.8 khz Roon transcodes to the best rate it thinks can be supported. It could be something in the USB settings, but your server was developed specifically for audio so I can’t imagine it wasn’t pre-configured to support higher rates. Have you tried different USB ports on your server? Auralic also has a Windows USB driver for Vega that should be installed, but you probably already did that to get DSD64? I’m grasping at straws by now, probably the same ones as you. Hopefully someone else has some other ideas.

Yes I really am puzzled myself.

Here’s a screenshot of the settings were the red is files needing pcm conversion. 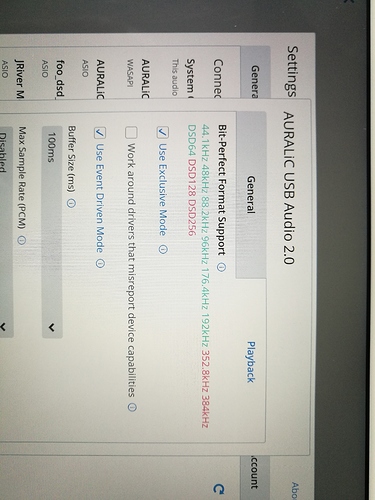 Have you tried the “work around drivers that misreport device capabilities”?
I have a much smaller list of options with mine because I stream through an Aries device.
I have other zones with different DACs that show similar setting pages, like a max DSD sample rate.
I would try turning on the “misreport” option and manually set the Max DSD sample rate to “Up to DSD256” and see what happens.

I’ve already tried that.
I’ve now contacted SOtM and asked them if they have a solution.