Metadata tags in my .dsf files are not being read properly.

When there are two entries in the genre field, separated by a semicolon, Roon shows the two merged together, e.g., “Classical”;"Concerto’ shows as “Classical Concerto”

Content placed in the .dsf file for this field is not recognized at all.

Hi Todd, I’ll leave a marker for @Mike to pickup up this one with you.

There’s a lot of variation here @todd129 so the quickest way to look into this is to get a file or two from you, so we can test.

Can you upload a file or two to Dropbox or similar and PM me some links? Let me know if not and I’ll give you a way to send the files directly to us.

I am having a similar issue with Artist and Album Artist fields separated by ; not being parsed as separate fields. Roon handles all of my FLAC files properly in this regard (e.g comparing rips from the CD layer vs. the SACD layer of the same album). All tagging has been done with JRiver, which sees the semicolons properly in the DSF files. Opening the DSF files in XLD also properly show the semicolons. I have attached screenshots for reference. Note the difference in the “Featuring…” section of the album information. The DSF file treats “Pittsburgh Symphony Orchestra, Marek Janowski” as a single artist. The FLAC file recognizes that the semicolon in the tag signifies these as two different values. 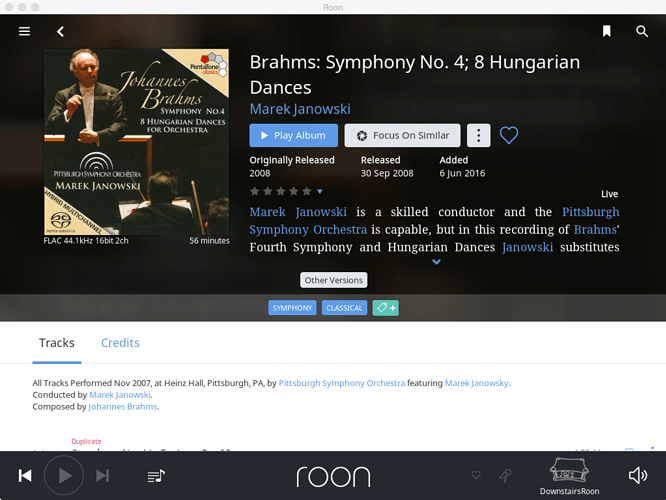 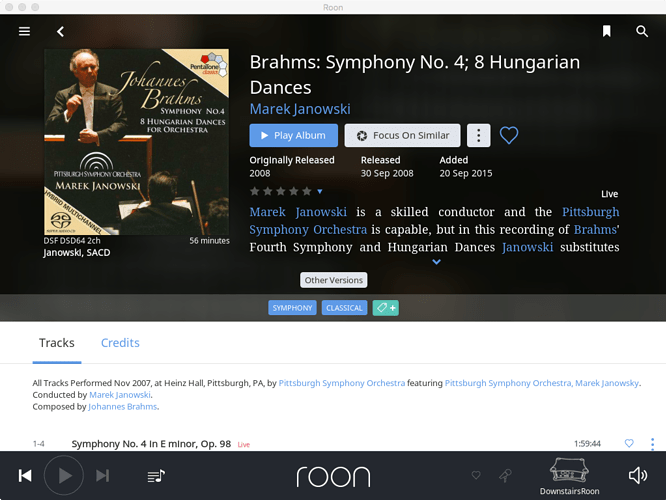 I probably should have flagged @support in my post since this is resurrecting a year old thread. I’m surprised this issue of semicolon recognition in DSF tags hasn’t come up much in the past, though to be fair it took me 6 months to pin down this as the source of the long catenated artist entries in my Roon database (mostly with classical).

I also realize that the example screenshot has a typo for the spelling of Janowski, bit the semicolon issue exists even when the individual artist names are spelled correctly (many other cases of dsf albums).

I’ve been nudging @brian from time to time about DSF tags not looking right. I think it’s a slightly complicated situation in that tagging software “fakes” the tagging in ID3 tags, not Vorbis, and it’s a bit of a mess. @brian can say more.

ID3 tagging is generally a mess, and each piece of software (not to mention many end users) are making up their own rules as to how tags should actually be structured.

As weirder files surface and are sent to us, we try to make Roon tolerant of variations, at least up to the point where things are truly ambiguous.

The issue you’re describing sounds familiar. Roon 1.3 should recognize those as separate values.

Thanks for the reply, Brian. I’ll be patient for the next release. Roon handles most things so well, that we get a bit spoiled