Duplicate composers displaying but not showing in Edit Credits

I have been having problems with duplicate composers showing on iPad etc when I play tracks. I have now switched to Prefer File on all import settings, so that I have more control: 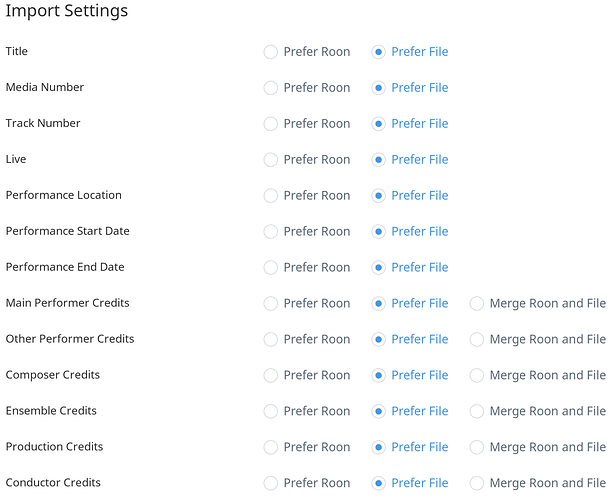 Now I have tracks that look fine in the album listing, but show missing composers in Edit Credits and duplicate composers in play lists and in the playback display.

Here is a track in iTunes: 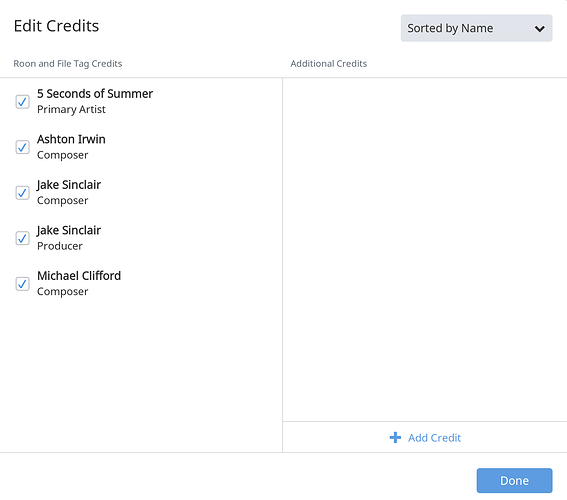 This is a problem with many tracks across many albums.

You have several issues there but there are certainly ways round your “duplicates” problem. You are going to get a lot of what looks like duplicates depending on how you have set your tag “delimiters” in import settings just below your screen shot.

By default roon doesn’t recognize an ampersand “&” as a delimiter for lists of composers, artists etc. in meta-data. So “Michael Clifford & Ashton Irwin” is not a duplicate of Michael Clifford, Ashton Irwin". Roon is treating this as three separate artists.

You could solve your duplicates problem by adding an “&” as a tag delimiter. That depends a lot on the type of music you listen to as there are many artists (Simon & Garfunkle) that you would not want to separate in this way. Most use a third party tag editor to replace " &" with "; " so roon delimits composer and artist lists properly. Edge cases like Simon & Garfunkle you will need to edit manually.

I suspect that a lot of your other issues are caused by a miss-match between “track” and “composition” credits. Roon maintains separate composer credit lists at an album track by track level and also at a more global composition level. They are often misaligned and this makes sense in certain genres. For example with Classical music a famous composer like Beethoven or Mozart will get the credit at the composition level, but this may be supplemented at a track level with an additional composer who may be responsible for the transcription, cadenza or arrangement. I have noticed a similar logic applying in other genres but it is very difficult to follow.

Hi Tony, thank you for your reply.

Because I cannot specify separate delimiters for artists and composers I have removed all “&” from the composer field on my tracks: you can see that “Michael Clifford & Ashton Irwin” does not appear in the iTunes capture above.

Thanks for pointing me towards compositions: this is where “Michael Clifford & Ashton Irwin” comes from: 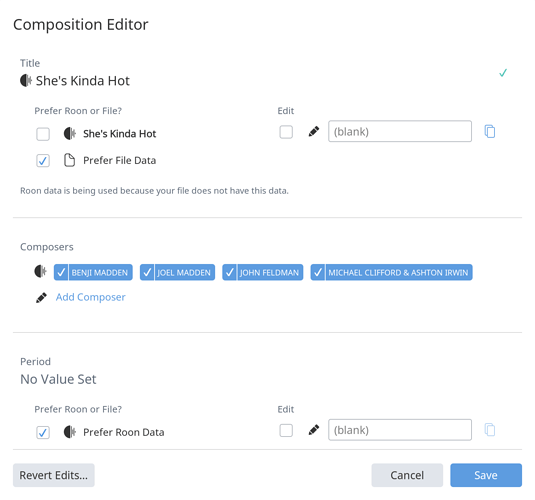 Can you tell me, please, why the Roon composition metadata has MICHAEL CLIFFORD & ASHTON IRWIN? There is no information on the “Michael Clifford & Ashton Irwin” page.

You can see that “Roon data is being used because your file does not have this data” even though “Michael Clifford” and “Ashton Irwin” are being displayed from my file tags above in the album display, track credit editor and playback displays. Can I globally stop Roon composition metadata being merged in to my track tags (this issue occurs on many tracks across many albums)?

Thank you for helping with this.

Can you tell me, please, why the Roon composition metadata has MICHAEL CLIFFORD & ASHTON IRWIN? There is no information on the “Michael Clifford & Ashton Irwin” page.

You can delete the concatenated composer if you want and add the individual ones instead. I often do this especially where the concatenation is a dead link as in this case. Otherwise your duplicates will happen again. For example on another compilation or covers album.

Why roon has so many of these dead links? I don’t know. Extremely common I am afraid. I think I remember seeing somewhere roon explaining that they use a number of “threshold” criteria to decide whether sparse upstream meta-data carries enough information to be useful in their databases. But nonetheless empty artists, no bio, no pic and all sorts of other empty links and empty data is extremely common. Would be much less annoying if it was user-editable so you could fill in the gaps but it’s all a bit scatter-gun. Sometimes its user editable. Sometimes not. Probably reflects a gradual hardening by roon over the years against user editable functions. It wasn’t always like that.

I’m not sure if you can globally stop the merging of composition metadata. Maybe someone else knows how to do this? I am normally wanting to do the opposite. If you use composition metadata as the master and instead edit the track metadata to get a composition “identification” there are many advantages. Roon then links all your “covers” and this makes for much more interesting playlists and improves the performance of radio. It benefits all genres but especially Classical and Jazz.

Thank you for another very helpful reply.

For now, I’ve deleted the MICHAEL CLIFFORD & ASHTON IRWIN tag, and left my file tags to fill in the individual composers.

Clifford & Irwin are composite composers, but John & Taupin, Leiber & Stoller are not? It’s a mystery to me.

It turns out that most of my problem with spurious compound composers came from a small proportion of compilation albums, the biggest culprit of which is later issues in the Now, That’s What I Call Music series, the prize winner being Now 102. In these compilations, there are many “&” added before the final contributor in the Roon composition metadata.

I wish I could add photos by name matching, or at least have a search box in the selection window.