the analogue Bach recording of Marie-Claire Alain has strange metadata that leads to duplication of playing duration: 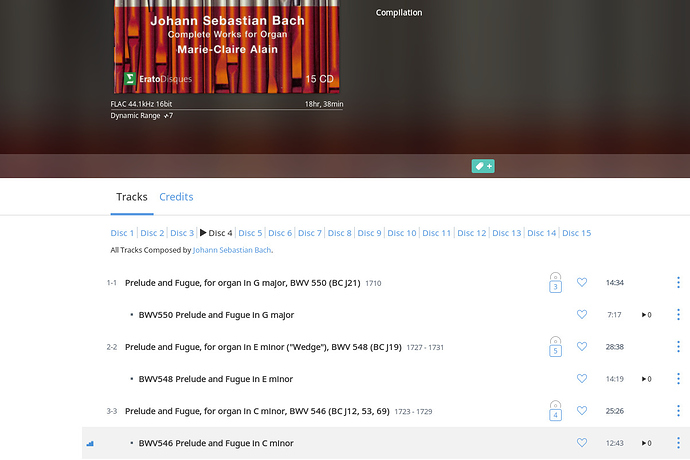 obviously the duration is counted twice because every single track work is displayed as WORK and PART.

while we’re at it… another question: I have set the library settings to prefer “file” everytime. Now that’s what I see when editing fields: 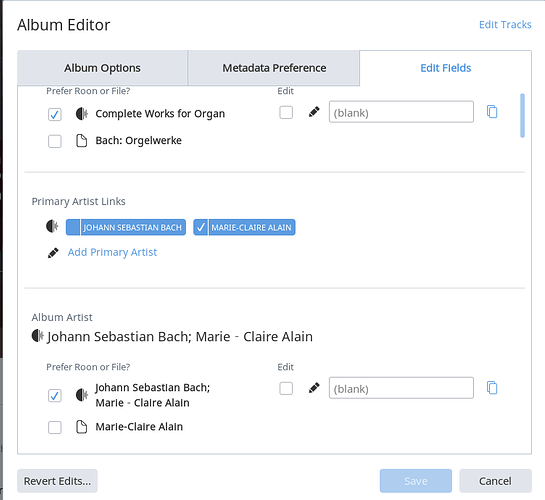 While it displays the file values in Roon, the checkmarks are always on the Roon data. Why is that? Is that a bug or by some design that I fail to understand?

[quote=“Klaus_Kammerer1, post:1, topic:21686”]
obviously the duration is counted twice because every single track work is displayed as WORK and PART
[/quote] Hi Klaus, no I wouldn’t make that assumption. Please can you verify whether or not you have duplicate tracks in the file folders for this album? Also, please would you confirm that the album is identified by Roon (it looks like it to me).

while we’re at it… another question: I have set the library settings to prefer “file” everytime. Now that’s what I see when editing fields

no duplicatae files - and yes, the album is identified. Also, when selecting “play” on the work level, only one file is sent to the queue.

I have seen this in my library, too. It could be fixed here, by going in the “Edit” menu (of the album) and reidentify the album…

Are you all for sure on the latest version of Roon? I’ve seen this a lot but for me it was totally fixed in 1.3.

another example of wrong sum-up:

identified album “Giulini in America”. I know Giulini often is a slow conductor but not that slow… Is the sum being provided by the 3rd party metadata or is it supposed to be calculated?

Is the sum being provided by the 3rd party metadata or is it supposed to be calculated?

track length is for sure in database’s metadata too: I often see, when identifying an album, local single track’s duration does not match with what is there (and Roon marks it red)

The sum is calculated by your Roon core. There does appear to be a problem here; I wonder if it’s related to having multiple local performances of the same Composition locally?

Klaus, does a re-identification (to the same metadata) make the problem go away?

@joel
yes, with re-identification on the same metadata it vanishes… interestingly enough, the work structure also changed and now shows the file tags only 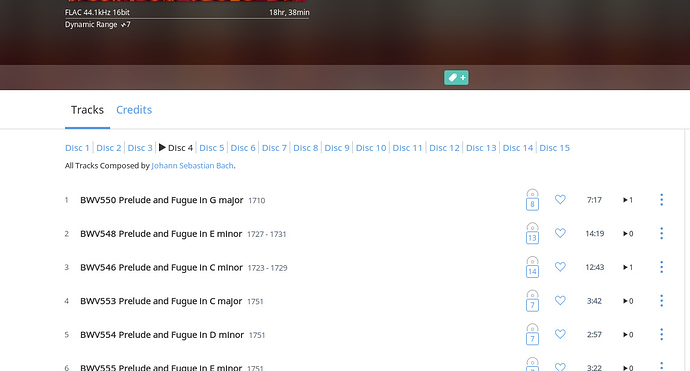 I kind of migrated…

I was coming from Roon 1.2 with my Pop/Rock library and after updating to Roon 1.3 was adding my classical stuff. So I’m new to 1.3 as these examples are concerned.

Thanks. Hopefully that narrows this down a bit.

Yesterday, I had the same problem with one album. And today, when I relaunched Roon, the problem disappeared. Just so you know!!!

Thanks @Edwin_Edwin_Vandevyv Creating a reproducible case is our priority here, but unfortunately, we’ve not seen this in house yet. Was this a new album that you were adding or an existing one that you happened to browse to?

It was indeed an album that I was adding to my library!!!

Thanks! This could be filesystem related. Please would you let me know your basic setup?

Windows, Mac, or Linux core?
Is your music on local, external USB, or NAS (SMB) disc?