I am having difficulty in revising ROON supplied composer metadata. I prefer to list Classical Composer by last name, first name, then followed by dates but when attempting to edit metadata preferences I do not see an option for composer. There are options for title, date, performer, etc but, AFAiK not global ability to change composer. As a consequence when searching for, as an example, Scarlatti, the results are
Domenico Scarlatti
Scarlatti, Alessandro (1660-1725)
Scarlatti, Guiseppe Domenico (1685-1757)
Scarlatti, Domenico (1685-1757)
Alessandro Scarlatti
Surely there must be a direct method to avoid these duplications.
Any assitance would be greatly appreciated.
Cheers,
WDW

For one thing, you have two different composers there. (Alessandro was the father of Domenico.) Did you want them to be treated as one?

Aside from that, the only ways I know to have composers’ names listed consistently are both centered around your preferences in Settings > Library > Import Settings > Metadata preferences for tracks > Composer Credits. You can either (1) prefer Roon and go with whatever Roon likes or (2) prefer file … but then it’s up to you to make sure your embedded metadata is consistent, by means of a third-party tag editor. I’m compulsive about composers, so I go with Option 2. Limited success so far, but I’m working on it.

Thanks for your comments. BTW: did know there were two family members.

If I use your method am I now required to review all files and not simply classical?..I am also compulsive and use Yate to tag. Will give it a go. Many thanks.
You mention “limited success so far” and I find this baffling that ROON would not set up a small group to address this issue. This could be a possible limit to further market acceptance. In this light I find sourcing and playing Classical works far easier in Audirvana than in ROON.

You mention “limited success so far” and I find this baffling that ROON would not set up a small group to address this issue.

Well, the Roon team have indicated that they have plans for addressing metadata issues, including crowdsourcing corrections. I’m not sure, though, if your problem is amenable to that solution.

My composer issue isn’t so much with classical compositions as with tracks on jazz albums. For classical, I’m happy with “firstname lastname” which is mostly what Roon likes, so no conflicts. For popular/jazz tunes, there are often multiple composers, and it took me until just a week ago to figure out that I had a delimiter issue — silly me, I was using commas — that was wreaking havoc. Once I identified the problem, I was able to use Yate’s Batch Processor Wizard to fix my entire library pretty quickly. Now I just need to figure out how to patch up Yate’s composer database, and I think I’ll be good t go.

I suspect you could also use Yate’s batch processor to good effect, but you might have to go composer by composer for classical, given your preference.

Yate’s batch processing? Have to investigate that one.
Cheers,

Read some other threads on this issue and surprised to see alternate methods of achieving the same end. Ludwig van Marbach mentioned a “filter box” unknown to me.

so why are these methods not readily known? No doubt someone will point to a page somewhere.

Don"t need this. Should be self-evident!

@Wdw Roon’s metadata infrastructure is smart enough to know that if you want sorting by last name “Domenico Scarlatti” should sort to S, but “Rolling Stones” should not. In order for this to work as expected, you’ll want to make sure your albums are properly identified.

As a general rule, you don’t want your files tagged based on how you want them sorted – you want them to reflect the actual names of the performers and composers involved in the recording.

Roon’s automated identification process is going to do much better if your tags reference “Domenico Scarlatti” or “The Beatles”, as opposed to "Scarlatti, Guiseppe Domenico (1685-1757) or “Beatles, The”. By using the standard spelling of these names, Roon can even make use of your tags on unidentified albums, by matching the composer credit Domenico Scarlatti to the actual person’s entry in our metadata model.

We know that other applications have required mangling of names in this way in order to sort properly, but that shouldn’t be needed with Roon and in some cases can actively prevent identification. Once Roon has properly identified your content, sort keys and born/died dates should be automatically populated into the database.

If you’re seeing those search results (and have your library settings configured to prefer Roon’s metadata), you probably want to Focus on unidentified albums and use the Identify feature (under Edit) to ensure albums are properly matched. This will ensure that “clean” composer metadata is applied to each track or multi-part work.

Lastly, if you’re looking for composers’ names to be displayed Last, First (as opposed to just being sorted by Last name), I’m not sure there’s a simple answer in Roon right now. You could edit the composer’s display name by hand (meaning Roon’s rich metadata for the composer stays intact but the Composer’s name is displayed in the edited form), or you can open a Feature Request for us to include this as a display setting in the future.

Maybe Roon could provide an easy way to display these? (Or maybe it’s already there and I’ve missed it?)

It’s already there - on a Composer’s home page, is it not? 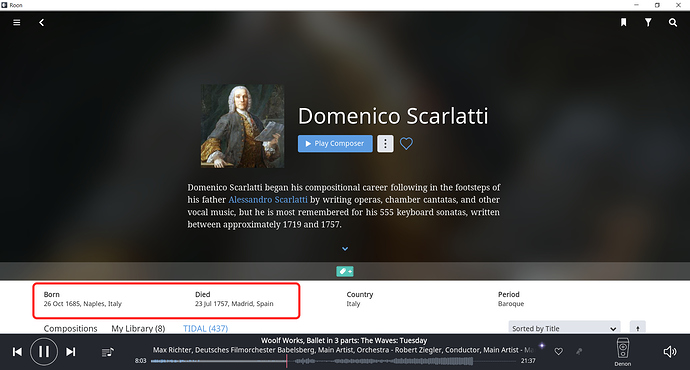 My bad. Completely missed it, as I was looking up in the bio.

Consider my comments about dates for composers retracted.

@mike
Thanks for your reply. If I am reading you correctly, in changing the naming format for the composer I am “fighting” against the very features that ROON excels at and so having edited my metadata to read classical composers in a Last name , First name and dates format I have created the very inconsistencies that prompted my initial query.
So, you recommend I default to ROON’s composer format and edit any outliers using the Identify to conform to this format. If doing so Would all of Domenico Scarlatti then appear under one search listing, the only important issue for me. My attempts didn’t yield this result.
Why under “Album Editor > Edit Album” are there options to revise almost every aspect of the metadata excepting composer? Same is true under “Metadata Preference”.
I must be doing something completely wrong as my intentions seem so straightforward and commonplace. ROON appears to list a small percentage of the ten or so albums that have D. Scarlatti as the composer.

you recommend I default to ROON’s composer format and edit any outliers using the Identify to conform to this format. If doing so Would all of Domenico Scarlatti then appear under one search listing, the only important issue for me. My attempts didn’t yield this result.

Why under “Album Editor > Edit Album” are there options to revise almost every aspect of the metadata excepting composer? Same is true under “Metadata Preference”.

You can also set preferences for your library in Settings > Library > Import Settings > Tracks > Composer Credits.