Hi, does anyone know how one can edit the performers? I have not seen an option to view all performers and then edit and merge like the option you get in the Artists and Composersmenu items.

I have a lot of names that are duplicates (lirycs, backgound vocals etc) and I would like to be able to edit them in the same way I can edit the Artists.

Do you mean this option? 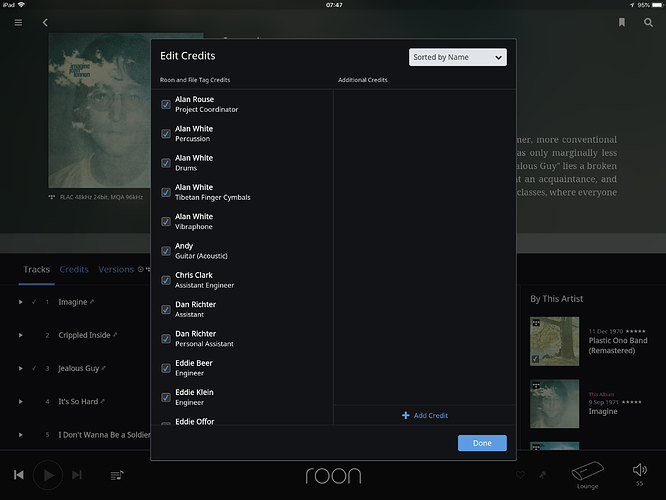 Thanks for responding chris.
What I meant to ask is how to edit the artists that appear in he credits (as shown in your screenshot). THere are duplicate names, or name that need to be removed or merged with others.

For example, if ther is an artist “Alan Rouse” and another one “Alan Ruse” (in another album), I would like to merge these two together.

Hope it is clear.

If you click on Alun Rouse, then all instances of him should appear. I think you can only exclude and add artist…

You want Edit Credits, which is available at Album and Track level. You can do everything you need from there.

Problem is there are a lot of duplicates and I would like to have the option to be able to merge these instead of editing every single album.

Would love to have the options for Artists where you see all artists in one view and can edit from there instead of editing individual albums.

Ah OK you mean that you end up with two identical performers only one of which is in the Artists browser? And you therefore can’t merge them.

I know the problem. I’m not sure how it happened they built it like that.

The only way to deal with it currently is on a track by track basis, which is impractical.

@Ludwig exactly! Actually in some cases I cannot find performers in the asrtists browser at all. Don’t even know where they are stored…

You can get at their pages either through the blue links on the Album Details page, or I think also via search. But as you understand, there is no browser for these performers. I think essentially it’s an equivalence problem which brings up the issue.

Thanks @Ludwig. I was just wondering if I am missing something essential. Maybe I can add it as a feature request…

I described one helpful trick here.