Ellipsis at the start of folders excludes folder from import (answered)

Posting this to report a bug. Did a search but nothing popped up.

Since installing Roon i have noticed that i was missing 24 tracks in my library compared to my jriver library. Tonight i was determined to figure out which ones they were and after finally figuring out how to export a list of my tracks in Roon (option in the + sign if anyone else is wondering) i was successful. Apparently if a folder starts with … Roon will ignore it.

Like many people my files are organized with an Artist\Album\Track file structure thus explaining the missing tracks.

for reference im including two screenshots on windows explorer overlaid on top of Roon, one with … in the folder name for the Album …And Justice for All and one without the ellipsis. 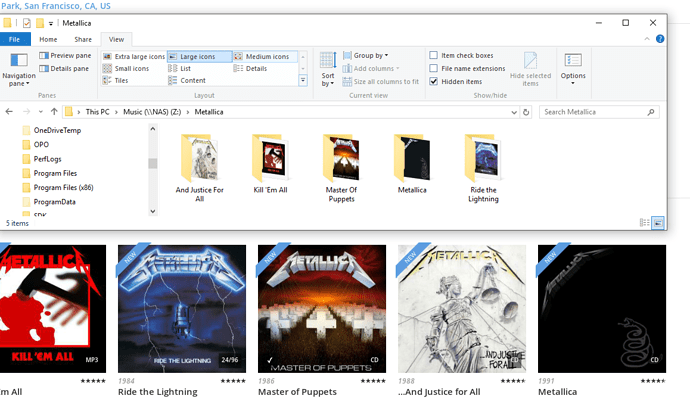 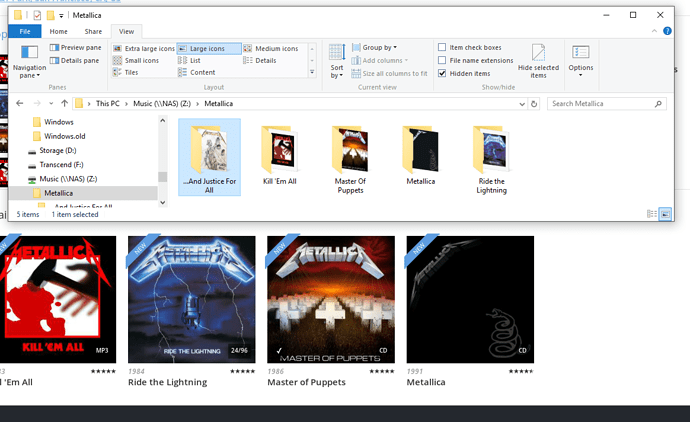 Thanks a lot Kevin, you made my day - I think I now know why I keep missing around 50 tracks

And I am convinced this will be fixed soon.
Chris

The problem here is that various operating systems treat leading periods as signifying hidden or system files. Roon ignores hidden files and changing that would be a bad idea.

Interesting. Thanks for doing some additional checking. I certainly can see why ignoring potentially hidden files was done.

Curious as to how the folder was created. Was it a ripping program or other software or did you create it ?

I like to rip into an organised folder so Roon can create it’s preferred file structure and then move everything to a watched folder (and backup).

Edit: I’ll shift this into Software for more general discussion.

The folder was created using jriver using my normal process. IE insert CD, look up data online, rip then organize files. Which places it in my Music Folder on that PC in an \Artist\Album\ then tracks structure. Files are then copied from that PC to a Music folder on my NAS, which is my watched folder in Roon.

Since having Roon I have maintained the same process (this particular CD was ripped years ago) on adding music either by ripping the CD using the process above or using jriver to simply organize any files i buy from music sites into my preferred format/location and then copying it to the folder on my NAS. I have not used organized folders as i have the neurotic tendency where i really like to be the one to control the organization versus Roon and that library is used for multiple programs.

I was able to remedy this situation easily enough on my end by using an expression in jriver to ignore the (…) on Album names when creating album folders so it won’t happen again to me in the future but i’m used to writing SQL code. I am not sure that is something the average person is going to be able to do or think to do. Likewise i certainly understand why y’all ignore folders that may potentially be intended to be hidden. I’m not sure what the best overall solution is aside from maybe including a list in the FAQs of characters in names of folders that may potentially prevent them from having thier contents imported.

While my library is probably smaller than most here at 11k tracks that was still a pretty daunting task to dig through each track to figure out which were the missing 24 tracks in my Roon library when compared to jriver (this album and another that start with …). Once i figured out how to download a list from each it was pretty simple to figure out the cause but until that point i was at a loss.

I wondered if other Windows programs were permitting that naming. Looks like at least JRiver is and probably others.

I’m no software engineer, and I’m just a user (volunteer mod) so have no special knowledge of Roon design philosophy, but I suspect that there may be an underlying design dilemma here:

The latter design would create issues for Support from time to time, as users find the edges between the naming conventions of various OSs, but it could be a better choice than having libraries display different contents on different devices.

It may be that @brian could tell us if I’m wide of the mark here. He’ll probably relish the break from torturing poor defenceless Squeezeboxes.