The Uptone LPS-1 can be switched between 5V and 7V so I’ll have a play.

I’ve got the 2 meter fiber replacing the ethernet cable that was between DAC and router, with a short 6-inch BJC Cat 6 ethernet cable between the DAC-side FMC and DAC.

The router side FMC is powered by an iFi 5V iPower and the DAC-side FMC powered by Uptone UltraCap LPS-1.

I’m hopeless with describing improvements so I won’t bother but I think I’ll be keeping it.

Short of a fiber input DAC, I’m finding this a nice addition and cheap for anyone to try.

I highly doubt you’ll hear any improvements powering the server side FMC with a cleaner supply. But if you have it laying around anyways, it will provide the required power.

Ya already had it. I also doubt it makes a difference on the router side FMC.

Another interesting observation. I have another Uptone LPS-1 used for something and tried using both with the pair of FMC’s. The router side LPS-1 runs noticeably warmer than the DAC side FMC, with both LPS-1’s set to 5Vdc output…

Meaning the router side draws more current (I think). Doesn’t mean much but I thought the DAC side may run warmer if I had to pick (not based on anything I know, so doesn’t mean much as I said).

If you swap the LPS-1’s, does the same thing occur? Maybe just one of them runs hotter than the other one.

Yep tried that too because it surprised me (again not for technical reason that I know of). Definitely the router side runs warmer.

Definitely not hot though - I’ve had the LPS-1’s run hot when they need to provide full VBUS power and it’s nothing like that.

But I would easily pick out the warmer unit in a blind test lol.

The DAC side FMC runs super cool when either LPS-1’s are used, so it’s hardly drawing any current.

Strange the same unit uses more current when sending more data than receiving. Unless both units will have equal throughput travelling through them. There’s a change the units are from different lots and 1 uses slightly different internal components that draw more current.

Your router must be 100mbit capable as well because otherwise it wouldn’t work with that FMC. The gigabit FMC’s won’t work at all if you connect them to a 100mbit router. I have a client who has a gigabit router and gigabit FMC, but old cat 5 cable and won’t work either.

Yep I mentioned that above, so my gigabit router supports 10/100/1000, which is why this works

These are definitely staying

Yeah they are picky units. They demand a solid gigabit connection or else they just won’t work. Not just TPlink but all of them. Here’s a very nice gigabit FMC from Ubiquiti: 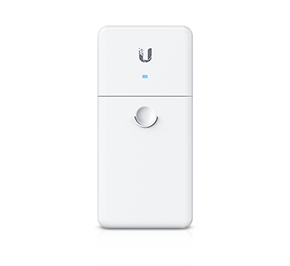 Can be powered by an PoE port on a switch. Saves needing another supply.

They demand a solid gigabit connection or else they just won’t work. Not just TPlink but all of them.

That one says “10/100 Mbps Ethernet are not supported” on the datasheet.

So if your DAC’s network card only supports 10/100 that won’t work either right?

Like you said earlier, some people have been caught out with buying the wrong FMC’s for their DAC’s network card (or their router)

Yeah everything must be gigabit. That’s the unit I recommend to my clients for connecting to my Superstream streamer. Besides being able to be powered by PoE, it has a PoE passthrough to power one of these very nice wifi units. Great for adding wifi for Roon remote control and fiber to a simple gigabit PoE switch. I use these PoE wifi units:

The F-PoE and UniFi mesh units can neatly mount to the wall behind the equipment rack. Both powered by the Ethernet cable.

I am seriously liking the addition of these FMC’s, right from the get go.

There’s a change the units are from different lots and 1 uses slightly different internal components that draw more current.

I switched the FMC’s around to test this and get the same thing - the router-side FMC’s LPS-1 runs noticeably warmer than the DAC-side FMC.

And after previously switching the LPS-1’s around before, I have no idea why the router side FMC is always drawing more current.

Playback has been flawless, no connection issues, all LED’s indicators are as they should be.

Not that it matters much though. Just an interesting observation I guess.

These are really great additions

Thanks for pointing me to this thread @dabassgoesboomboom. As you know, I already purchased two gigabit FMCs, but they won’t work with my network DAC which I now know is only 10/100. I guess I should probably return them to Amazon and pick up two MC110CSs like you’ve been using. Is there a relevant difference between the MC100CM and the MC110CS? Comparing the two models on TP Link’s website shows only a differences are (a) transmitting and receiving data at 850nm vs 1310nm (don’t even know what that means), and (b) how far they can extend (1.2 miles vs 12.4 miles). For whatever reason, the MC110CS is about $6 cheaper than MC100CM on Amazon right now.

I had purchased the Tripp Lite Duplex Multimode 62.5/125 Fiber Patch Cable (SC/SC) for my gigabit FMCs. Is there a different cable that goes with the 10/100 FMCs? Would you be so kind as to advise me on what to buy?

Finally, does it matter that in between my gigabit router and the first of the two FMCs, I have a gigabit switch (NetGear GS105)? I would think there is no need to put a 10/100 switch in place.

I really really appreciate your help!

Is there a relevant difference between the MC100CM and the MC110CS?

You do need to make sure you have the right fiber cable for the right FMC as @wklie mentioned - perhaps if you get the MC100CM you should be able to use your existing fiber cables. Double check this. Or you can just copy exactly what I have working reliably - see below.

Finally, does it matter that in between my gigabit router and the first of the two FMCs, I have a gigabit switch (NetGear GS105)? I would think there is no need to put a 10/100 switch in place.

No problems here, there’s a good chance your gigabit router supports all 10/100/1000 connection speeds so you should be fine with the 10/100 model FMC. You can double check your router for this too to be certain but it seems a safe bet.

Would you be so kind as to advise me on what to buy?

If you want a combination that works you can just copy me, otherwise you need to check carefully to make sure you’re getting the right cables for the right FMC’s:

As Peter suggested (and I agree), try and power your DEQX side FMC with a linear PSU if you can… Just use the stock suppled PSU for the router side (or switch side) FMC

Apologies I don’t have time to relook at all the FMC models (it’s been a while) but I hope the above helps - I know it works so that’s a good start at least.

try and power your DEQX side FMC with a linear PSU

@Brice_Lang get one unit of this $11 power supply as well:
https://www.jameco.com/webapp/wcs/stores/servlet/ProductDisplay?search_type=jamecoall&catalogId=10001&freeText=1953639&langId=-1&productId=1953639&storeId=10001&ddkey=http:StoreCatalogDrillDownView

Good point if you’re in the US. These Jameco linear PSU’s aren’t available here in Oz sadly or I’d have a few of them.

I haven’t tried fiber, so cannot corroborate the comparisons personally. While I was reading comparisons of several people that have tried direct bridged ethernet connection between the computer and endpoint along with FMC, they all liked the sound without the fiber in the middle. Just straight copper ethernet connection.

I have tried it on 2 of my Macbook Pros so far. It’s worth a shot.

I haven’t tried fiber, so cannot corroborate the comparisons personally. While I was reading comparisons of several people that have tried direct bridged ethernet connection between the computer and endpoint along with FMC, they all liked the sound without the fiber in the middle. Just straight copper ethernet connection.

Hey zoom25. I know the CA Forum thread you are speaking of where all these observations were made. The funny thing is a large group gravitated towards FMC’s - then many gravitated to having a networked endpoint with the direct ethernet (bridge) connection you mentioned and said this was better than FMC’s… then it went full circle with many saying the direct USB connect sounds best. Now it seems the SOtM trifecta solution thing is what a few have moved to.

Disclaimer: it’s a guess - nobody has any idea about what’s actually happening with absolute certainty. Also it has nothing to do with loss of bits, so in case someone jumps in with stories about how data centres work fine and you can stream music from Norway to Australia and the bits are all there - yes, this has nothing to do with dropped bits. Assume bit perfect playback.

Ok so the thinking is that the ethernet-to-optical-to-ethernet conversion process results in increased levels of jitter and greater number of re-tries with the ‘receiving end’. If the receiver FMC is directly connected to your networked DAC, they tell me it’s POSSIBLE (or not) that the DAC’s internal network card is working harder with these re-tries (yes, it’s still bit perfect, not talking about dropped bits at all) and this extra work is creating noise within the DAC and affecting SQ…

If the FMC is connected to a networked microRendu (or whatever, just an example), which is between the DAC and receiver FMC, well the microRendu is doing ‘the extra work’ and not the network card inside the DAC. But it still MAY (or not) affect SQ.

No such thing as a free lunch in this hobby though. So when adding FMC’s you are also adding more PSU’s to the chain/system too. These may (or not) affect SQ in different ways.

6 days of the week I just have a microRendu powered by mains connected linear PSU’s connected to my DAC/s because it’s quick and easy to get music playing fast. But sometimes on the weekend when I want to go full throttle bonkers in tinkering mode, I take out my modified FMC’s (switching regulators replaced with low noise linear regs) and I power them with 5Vdc power banks, keeping them completely off mains power… The isolation from mains power seems (to my ears) to be a bigger/more important factor than the voltage noise/ripple output of the powerbanks powering the FMC’s (plus I have low noise linear regs to deal with that anyway) - completely breaking/isolating leakage current loops (battery powering the FMC’s and the optical isolation) perhaps seems to be the bigger factor?.. who knows. It sounds incredible to my ears though, very noticeable but not practical for everyday use for me.

Did anybody report that they found the number of retries actually increase with FMC? In a simple home network with proper Ethernet cable retries should be rare. I’d be surprised if FMC increases that.