Hi, it would be nice to have an “export to excel file” (or even other text format) function that will extract all the artists & album titles (eventually also songs and genres) from the Roon library.

What do you think about it?

How do I export my library to an Excel spreadsheet?

Thanks for the hint. Is this working only from Desktop computers? On my iPad I don’t have any option to export…

Tablets are for some reason second class citizens in Roon. Linux is the illegal immigrant.

Using XL sheets on a tablet (ipad in my case) is a horrible experience. Use a PC or Mac if you want to do any sorting or analysis.

At least let the user choose to export to the tablet. They can then send on to a pc and import using non windows/OSX alternatives

Agree, but, I suspect the poor file handling within the iPad was a limiting factor (originally).

I expect the Team have it on the list of to-do’s.

What’s the point? If you export from an iPad/Android device but can then only do anything of any worth on a PC, Mac or Linux desktop then it is hardly a compelling use case for spreadsheet export on a tablet.

Pretty simple, if you don’t run Windows or Mac you can’t export.

Same nonsense with convolution, you have to do your measuring on a windows or osx machine because you can’t use a tablet to point Roon to the convolution files.

But with respect though, it is a conscious choice to not run either PC or Mac and the user has to take some accountability for that decision.

Without widespread use of PC or mac we would never ever be in this discussion in the first place. We’d be spinning CD and vinyl still.

But with respect though, it is a conscious choice to not run either PC or Mac and the user has to take some accountability for that decision.

Agreed, it is a choice, but it’s also a conscious choice to disable that functionality for tablets.

I don’t think it was an arbitrary choice though. There are technical considerations.

By PC I presume you mean windows? I use a pc - but it runs on Linux. Tablets have gigabytes of storage, exporting to the tablet storage shouldn’t be a biggie / technically difficult. Equally being able to point Roon Server (whose directory tree can already be browsed by tablet when pointing to music sources) to convolution files on the server is not technically challenging.

I’m in the same boat as @evand, i.e. Android remotes and the core on Linux so no export function

What I plan on doing is create a ‘Poor Boys Export’ extension that uses the Browse API to write a list of Artist/Album/Track entries (or variations on this) to a file. The file can e.g. be in csv format that allows it to be opened in Excel. The file would end up where the extension is running, so if it runs on the system that runs the core it can be picked up from there.

) but for me it would be usable. 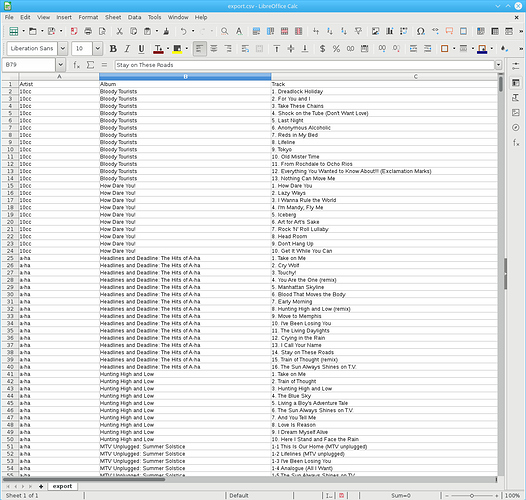 What is provided via the Browse API is quite limited compared to what is available in Roon. Besides Artist, Album and Track information there is some Genre and Composer information.

You can check it for yourself by using the library browser of the Roon Web Controller (I think you know it), @Mike_Plugge has included everything that is provided.