I am currently using two individual hard drives to store music accessed by my NUC. I would like to speed up file access for playing music and for updating the Roon library. I’m currently using 6TB to store these files (all lossless), and need some room for future expansion. Using SSD drives would be too expensive, and I have a RAID enclosure that I could use. I also like the fault tolerance of RAID (Raid 5 or 10 are options using the enclosure I already have). I could format the RAID disks and copy the music files to the RAID array (using a Windows machine) and then plug that into the NUC. But before I spend the money on buying 4 new disk drives, let me ask here… Is this something that will work and, if so, is it a good idea?

First, why do you want to speed up access? During playback, you don’t have a speed problem from the music files, any storage is fast enough for that. Are you thinking about speeding up copying newly ripped or downloaded files? What is the goal? (Speed matters for the Roon database, but not for the media files.)

Second, there are RAID modes that provide speed up, but mostly RAID is used for reliability, to prevent data loss or provide business continuity.

Third, reliability is a good goal, but I wouldn’t recommend RAID anyway:
a) You need separate backup anyway, RAID does not protect from all loss scenarios: fumble-finger change or delete, theft, fire, etc. RAID is not backup. So you need off-premise backup, and if you have backup, why would you do RAID?
b) Disk failures are rare. Yes, you need protection, but most likely it won’t happen. So over-protection doesn’t seem useful. And you are not a bank, so business continuity is not really necessary: in the very rare case of a disk failure, you will have to deal with it before you can play again.
c) Complexity is a bigger cause of problems than hardware failure.

This is what I do:

Disk failures are not rare. RAID1 and above are for high availability, not backup. RAID or not, you need to backup your data.

The question here is for ROCK - will RAID (USB 3.0) work with a ROCK NUC box?

I already have the RAID box. I already do backups. Several of them. With a large music library I am a bit paranoid over losing files. Roon has taken days to update its library settings. (Why it is doing that I have no idea.) Just one example of why I might want to speed up access. Another example is the time it sometimes takes to queue up songs. Sure, a few seconds wait isn’t intolerable, but a more snappy access would be nice. Sometimes Roon will announce it is having trouble accessing the file, and it goes on to the next one. (I just have to go back and the file will load and play - it isn’t corrupt.) It would also be nice to be able to put the entire library on one drive (rather than the two disks I have now).

You will not be able to load any drivers ON the ROCK device. A lot of the DAS (desktop Attached Storage) units I’ve seen require you to load drivers to setup and manage the RAID. That won’t work with ROCK.

So, as long as the drive itself handles the Raid and presents itself to ROCK as a single “usb” drive ( I am assuming you are talking about a USB attached Raid Device) then ROCK would probably see it. But, the only way to tell is to try it.

What about this Icybox RAID disk enclosure I have one, not used it with my ROCK NUC but could try it if required?

There is a non raid and a raid version.

From a playback point of view either are suitable, speed between the devices really isn’t a factor in file playback. I currently use USB 3.0 attached drives but previously used a NAS and observed no difference.

icybox IB-RD3620SU3, does appear to do its RAID 0 and 1 in its own system independent of the attached machine.

The fist one I linked to was the u3 version which is just a JBOD, the su3 is the raid version, well made reliable little box.

I know, I read the manual for the correct version, which is what I responded to.

Roon has taken days to update its library settings. (Why it is doing that I have no idea.) Just one example of why I might want to speed up access. Another example is the time it sometimes takes to queue up songs.

I still don’t understand your objective.
Why do you believe these problems are caused by disk speed of the media library, rather than the database or cpu?

I have the fastest cpu available for the NUC (the i7), and the database is what it is (large), so this is the only angle I can think of to improve things.

Are you running the database on an SSD? If not that will be the biggest improvement.

What are the hardware specs and OS of your PC? At 130k, I would use an i5 or i7 Intel CPU (from within the last 3 years or so) and make sure that your OS drive/Roon database drive is an SSD.

@philr Right, that’s my point.
That (small) SSD has a huge impact.

@Ronald_Lyster Is it just that your library is doing background analysis? Can you post an image of your settings>library 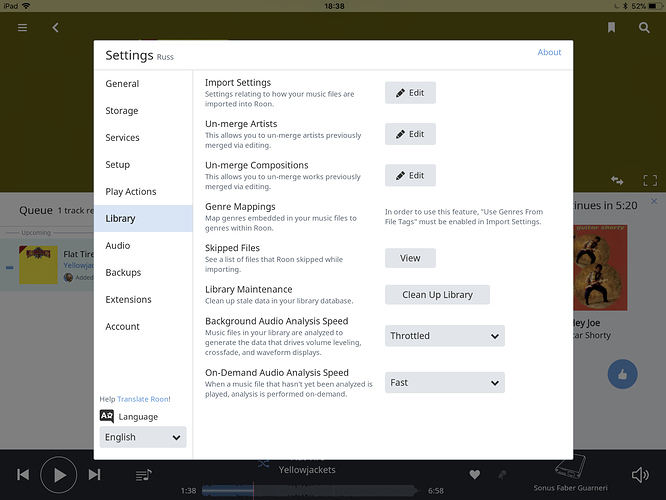 This is the best discussion I have seen on how different hardware impacts Roon’s performance.

Roon on macOS not working with huge library Support

For the most part the critical item here is CPU speed. Due to the way that the Roon database works adding more cores isn’t going to have any real impact on search performance. If the Roon Core is used for other tasks then having an extra CPU core or two available for those tasks will reduce contention. Important only in the sense that you never want Roon to run out of available physical memory. When that happens the OS will swap some memory blocks to the system disk and that can really kill p…

Yes. I have a 128 GIG m-Sata SSD drive on which everything but the music files is placed.