So a number of folks here are dissatisfied with artist bubbles with initials in them. I suggest:

I think #1 might be the hard part. I don’t know if there’s an easy way to run a Google images search and pick the first image, or the first image with one face in it, or to filter for ones without rights issues, or to use even ones with rights issues but credit them with a link. If it’s not data from the Roon DB, but instead each user’s core is fetching those images on behalf of him/herself perhaps it’s not an issue. Perhaps there’s another lightweight way to solve it.

As far as the issue of “what about when we get it wrong” (which also applies to when the software picks the wrong face or wrong centering”, I imagine a feedback mechanism with a small question mark icon over each “automatically sourced” image which pops a menu saying “this seems right” or “this isn’t X!” or “X is in this picture, but the centering is wrong!”; you could even get fancy by letting users pick better pictures or manually fix centering and then use that as training data.

Anyways, I’m sympathetic to those who don’t love the “wall of initials” and I’m trying to think of a good way to solve in a reasonably scalable way. Because I like the images, and the circles, when they are all populated at least.

Absolutely open to other suggestions on how it should behave or be implemented.

@brian in case this sparks any thoughts. Thanks as always.

But I would personally prefer not to become a digital labourer / technoserf working for free, especially when I pay so high a price for a service that supposedly includes quality data/metadata.

We are working on some plans to improve coverage of artist artwork. It will probably involve a combination of smarter machine-based stuff, new data sources, and human curation.

I’ve done a bit of this here and there because its fun. Some artists though are seem ot be quite obscure and it can be hard to even find a picture of them, yet alone a quality one.

I’ve also gone looking for photos of artists in their hey day; prefer a black and white photo of a young long haired rock dork to a high res photo of a highly groomed rock survivor.

But I would personally prefer not to become a digital labourer / technoserf working for free, especially when I pay so high a price for a service that supposedly includes quality data/metadata.

Hmm. For what it is worth, most services that use me & you as an unpaid technoserf do so in ways that aren’t that obtrusive (eg, image captchas as training set builders for image recognition ML models). I wouldn’t object at all to participating in the half baked if it got to better results faster. If they wanted they could make “expose me to metadata we are not sure about so we can crowd source correctness” an opt out or opt in. In other words I’m happy to be your unpaid labor if there are enough people who participate right along side me and I get what I want faster.

@brian not sure if this is what you mean by human curation or if you mean Roon employees. Maybe I’m a very rare case, but if I’m not, you might have some more willing helpers at creating crowdsourced meta data.

Human citation is used for adding the radio stations, so possibly similar.

I’ve been adding images for bands and credited people for a while now. I find it relaxing, entertaining and sometimes educational. But when you have european Metal bands that recorded two albums in the early 90’s and then split, sometimes it’s very hard to find a hi-res images and, of course, members of such bands most of the times are nearly impossible to find.

Sometimes I would find a decent pic for the rounded circle, but of course it’s useless for the banner, so maybe we could have the option to add two different images…
This are the things Roon needs to think how to “solve” or at least deal with. Maybe producers only get the circled image and not the banner.

But what drives me crazy are things like this: 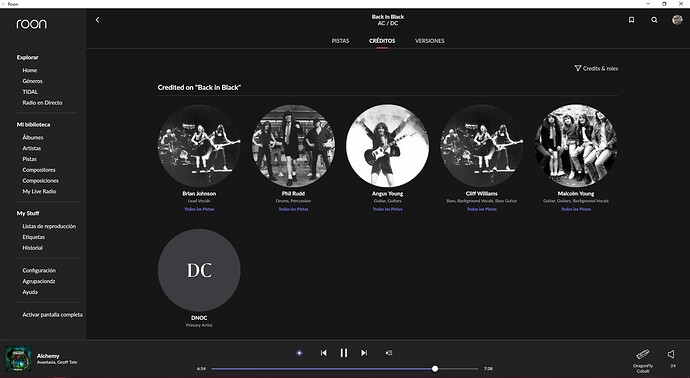 Sin título1919×1052 191 KB
Are you really telling me there are no individual, decent hi-res pictures of 4 out of 5 AC/DC members? They’ve been around since 1973. The worst is seeing Brian Johnsson and Cliff Williams using THE SAME image!
Roon is supposed to be a rich, deep UP TO DATE metadata based software, at least they promise that on the site:

Don’t get me wrong, I LOVE Roon and it changed the way I listen to (experience, actually) my music, and that’s why I want the best from it, not because I’m paying, but because it could improve one of my biggest passions.

I found pictures of all artists in my library, cropped them to a good sice. That was in version 1,7, version 1,8 ruined all this with its silly round picture frames. And now i dont care anymore. I probably will not renew subscription when its due, turned off auto renew.