I run roon server on a headless macmini connected to a Marantz AV receiver via HDMI for multi-channel playback.
When playing stereo or mono music, I prefer listening to it in 5.1 by activating the “7.1 multichannel stereo” DSP setting on the Marantz AV receiver.
It would be nice if Roon had an option to automatically do upmixing just like what the AV receiver does, so that I don’t have to manually activate the DSP on the AV receiver.

Check the device setup, it appears there is an option to do what your asking. Set “Send stereo/mono content as 7.1” to Yes 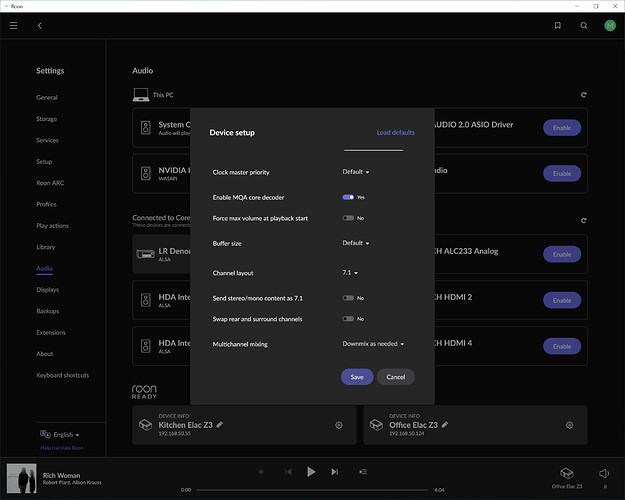 I’ve used that before but I usually have my Denon receiver setup to do that automatically. If the music content is MC the receiver selects its 7.1 Multichannel processor, and for Stereo it will use the Dolby Surround processor to simulate Multi-channel. It was a set and forget option that does its thing without intervention. I have to set it back to play just stereo if that is what I want but I have a separate Dac for that.
Denon and Marantz are closely related so your Receiver should have the same options as mine does.

Yeah I saw that option and must say the text is quite misleading at the first place (for my use case). I tested it and it doesn’t “work” in my case. it doesn’t do any upmixing. After reading the official documentation, I understood that it is not meant for upmixing anyway.

Regarding the automatic switching performed by the AV receiver, it’s true, the Marantz AV can do that just like your Denon. For example when I watch a “stereo” video on youtube via my Apple TV, it does switch to 7.1 stereo and then when I watch a 5.1 movie on Netflix it does switch do Dolby Digital.

My use case with Roon through the MacMini and HDMI is a bit different.
On Mac, you have to set via “Audio Midi Setup” the layout you want to use.
For multichannel listening, I chose the “9.1 24 bit 192 KHz” layout. And once I chose it, it’s fixed, it doesn’t switch automatically according to the source.
Consequently, my Marantz AV will always see my source as a multichannel source so it will never automatically use the 7.1 stereo DSP when the supposingly 5.1 source contain only 2 channel music, because there is no way it can determine that.