I am reporting a complete mix-up of metadata on the recently released album by Francesco Corti Handel—Winged Hands (Arcana, 2022-03-04).

This issue is with the album provisioned by Tidal. I have imported the album into Roon from Tidal, without any edits at this point.

The album on Tidal appears with out-of-order tracks, as so many albums recently. On new classical releases this is an ever more common problem. Normally, I can correct this rather easily in Roon, rearranging the track order. This time, though, Roon shows the album with the out-of-order tracks, but with the correct order of metadata (work and track titles). So now I would have to rearrange the tracks into the right order and then correct the track titles. Very tedious indeed!

Here some screenshots for illustration.

First, screenshots from Tidal App showing the tracks out of order. I of course will report this to Tidal: 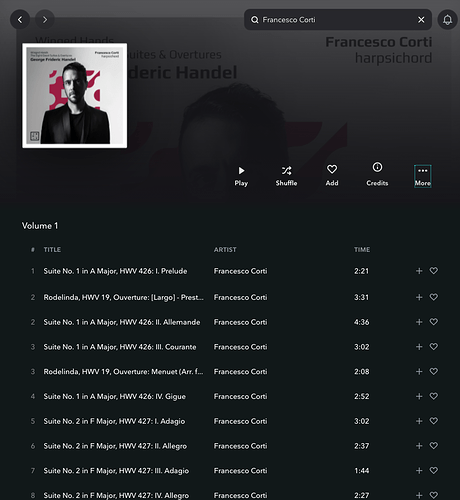 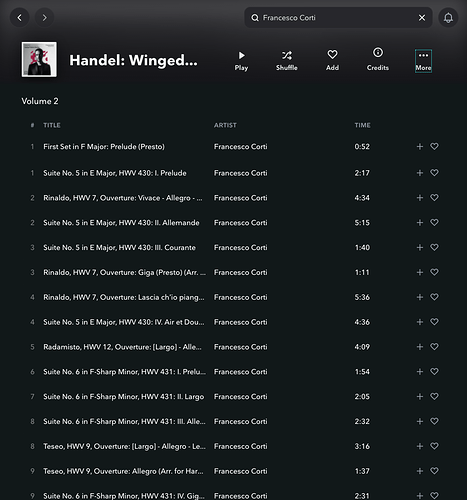 You can easily see how in Tidal the tracks are in disorder, but at least they show for every track the correct corresponding metadata. 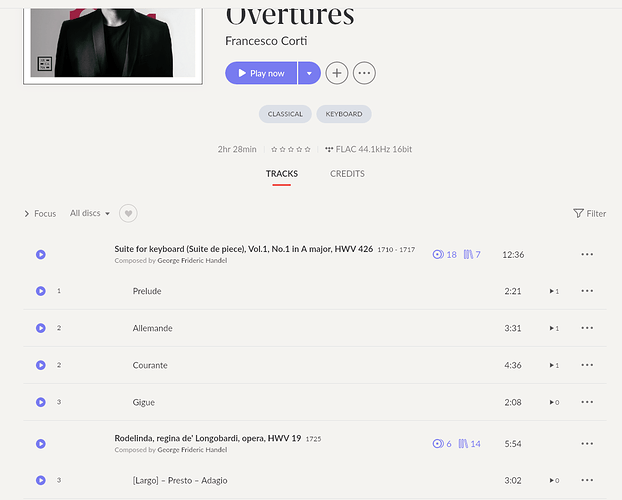 In Roon, the works are shown in the correct order with their corresponding tracks, but the tracks themselves do not correspond to the shown metadata. For example, tracks 2 is shown as second movement (Allemande, 3:31) of the First A Major Keyboard Suite, but if you compare with the Tidal App screenshot, you’ll see that in fact this track corresponds to the Rodelinda Ouverture.

I have tried importing this album both with import settings for work and track titles set to ‘Prefer Roon’ and ‘Prefer File’. The resulting mix-up in both cases is the same.

This is very annoying, as this really precludes enjoyment of this and other similarly affected albums.

It seems to me that Tidal are so heavily focused on non-classical genres, that they don’t devote the requisite resources to ensure that their classical library, which requires the highest degree of curation, is up to scratch.

I was getting progressively frustrated with Tidal to such an extent that I recently cancelled my subscription, and now only stream/download from Qobuz, or download from NativeDSD.com and HDTT (plus others, sometimes).

I addition, I found that the Qobuz SQ invariably sounded better (to my ears) than Tidal.

I’m not sure if Qobuz is available in Colombia but, if it’s not, I suggest that you utilise a VPN to access it.

Thank you for bringing this additional example to our attention. we’re reaching out to TIDAL to alert them of the issue here. We’ve been in contact with them about these problems. They’ve shared that they’re aware of it and that they’re working toward a solution.

We’re also looking at some things on our end to see if there’s more we can do to prevent these incorrect album displays from making it through to Roon.

If you don’t mind can you also reach out to TIDAL to report this problem. We more reports they get the better the chance that these errors will finally be corrected.

I’m marking this one solved in recognition of the action we’re taking on this individual case. We acknowledge that we’re likely to see more of these while TIDAL works on this. As always we appreciate your report and your help with this.

Thanks for taking time to respond.

If you don’t mind can you also reach out to TIDAL to report this problem.

Have done so already last week, without hearing back from them.

While there are a great many albums with tracks in disorder, please note that this one is particular. Normally, albums with out-of-order tracks at least show up in Roon with the correct metadata for every track. Then one notices at first sight that the tracks are simply out of order and one can use Roon’s tool to reorder and be done.

On this album, though, on adding the album into Roon’s database, it showed up with seemingly right track order, and only on playing back would I notice that things were not ok. That is, tracks were out-of-order and in addition they had wrong metadata. Clearing up this mess was much more work than usual…

Yep, this specific characteristic of your issue report was what prompted me to say that we’re revisiting our measures to see what else we can do to make sure this doesn’t happen. We spent quite a bit of time on this case in our metadata team meeting and have some ideas of ways we can do this. I submitted a ticket for that work just before I saw your reply. Thanks again