FreeNAS and FreeBSD plus 10TB array on SSD RAID...not cheap tho' 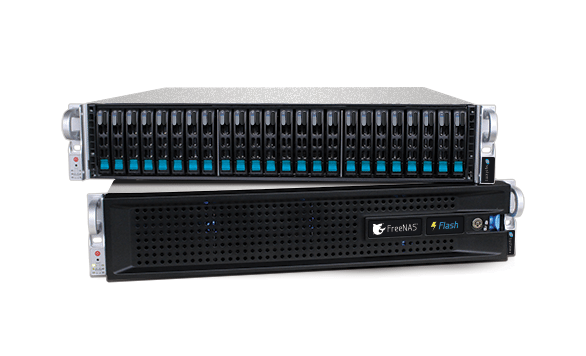 10TB of All-Flash for Under $10K: All-Flash Storage is Within Reach for SMBs

Time is money. When we heard that small and midsize business (SMB) customers were left behind when others deployed expensive all-flash systems, we decided to do something to help. So, after months of design and testing, we’re proud to announce the...

I wonder if this puppy would run Roon Server too

That said www.freeness.org might also make a good home for the Linux Roon Server with local storage for music. I used to use one of these setups many moons ago on IDE based drives - now that server 2TB maxed out can fit on a SSD…might be time to revisit this with a mono that has good multiple SATA ports (6 or more) and perhaps M2 for the boot.

Is anyone here running FreeNAS with FreeBSD, and tried running roon server on it? @crieke Chris you you might be the guy to ask on this front…any thoughts?

I have been thinking about something like this for a while, also interested to hear if anybody has any experiences with FreeNAS or similar systems.

I have not tested FreeNas, yet. I might take a look and install it in a VM, when I have some spare time…

I’m running FreeNAS and Roon (Ubuntu) virtualized on a small server. VMware ESXi is free but adds a little extra complexity to the setup. Works great! With FreeNAS 10 which is imminent you can probably run FreeNAS on the bare metal and add Roon in a Docker container within FreeNAS.

add Roon in a Docker container within FreeNAS

Hmm that is something I have not read up on…I probably need to get an old machine resurrected to fire up FreeNAS on and see what happens with a couple of old drives in there as a test bed to play with…not sure when I might get some time to do that.

I run the current Freenas 9.10 release, with the Roon core running virtualized in iohyve.

next month Freenas 10 is due to be released, with built-in Docker virtualization. In due time I’ll migrate to FN 10, and Docker-ized Roon Core. I have no complaints about running Roon Core in a Freenas pseudo container. I allocate some RAM to it (16Gb I believe) and mount the database and OS on mirrored SSD’s. The music files remain on raidz2 ZFS datasets. I believe another Roon-er (Peter Wright) also runs this configuration. Happy to answer more questions about it. Nearly 4,500 albums, 63,000 tracks.

Are you running any other Plugin type application other that Roon Core? I’m running Plex as a Plugin and I wasn’t sure if it would handle both. I’m currently running Roon Core on separate Ubuntu box I’d like to get rid of.

I am running two other jails on my server, a freebsd jail running MRTG for bandwidth utilization graphing, and rclone Amazon Drive uploading (very light load) and a Plex Pass freebsd jail. Plex helpfully has a freebsd port, so it is very easy to run as a light-weight jail under the current Freenas. I rarely listen to music and watch a movie/TV show at the same time so there is plenty of “oopmf” for Plex and/or Roon. One box, 64Gb of RAM, Intel® Xeon® CPU E3-1245 v5 @ 3.50GHz, FreeNAS-9.10.2-U1 (86c7ef5).

Sounds good. I guess I’ll give a try. What OS are you running in your VM?

my iohyve VM is running Debian Jessie. Peter’s rundown (available on this site) is a good overview of the steps required. Perhaps Arch linux or Debian Stretch (not yet released) are good alternatives. Occasionally, after a reboot I must re-mount the NFS directories in order for the files to appear. I haven’t figured out why or how to avoid this. Luckily FN 9.10 is very stable and rarely requires a reboot.