Frequently with Qobuz integration there is no composer, no work/part hierarchy, no artists

@support. On adding from Qobuz, this version of Puccini’s Suor Angelica has no “part” level title’s at all. Sometimes I am able to manually edit but not in this case. I find it extremely frequent that there is no or little metadata with Qobuz albums in roon. It is very common, there is no composer, no composition hierarchy and misapplied artists and soloists. When I look in Qobuz using their apps the metadata is normally there. It is so common there must be some pattern in which the Qobuz metadata is being supplied to roon that is making these numerous, frequent errors. 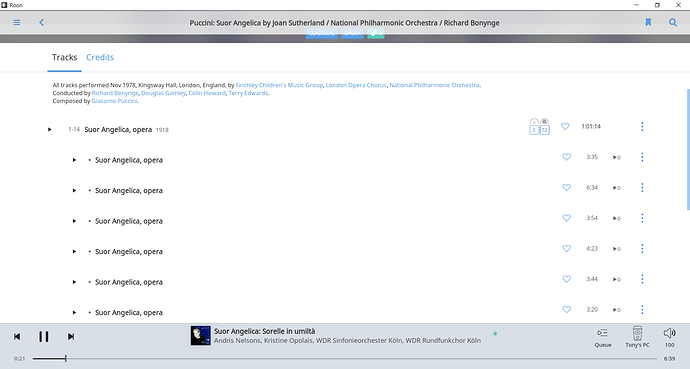 We are going to reach out to our metadata provider about this. Thanks for the report @tripleCrotchet!

@dylan. Thanks for taking a closer look at this. But this is just a completely random example. I find this happening all the time when I add albums from Qobuz. Maybe 75% of the time.

To me it is inexplicable that there are no composer credits after adding from Qobuz to roon. It is of course possible that Qobuz is not providing basic tags to roon. But it is also possible that they are providing this information but in different tags than roon is expecting so that it is a roon<->Qobuz mapping issue. Has roon already discounted this possibility?

@dylan, This one for example once added to roon has no, composer credits, no artist credits, no performance date or location credits. This is particularly important with Furtwangler who recorded many groundbreaking versions of the standard German repertoire and often the most important piece of information is whether it was a war time or post-war recording. 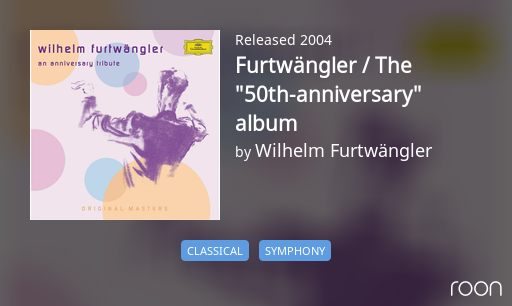 When I look at this release in the Qobuz app most of the information is there. Certainly basic information like composer and artist but it is clear that their data model is idiosyncratic to say the least. So in this screenshot the composer is “various composers” and the artist is “Johann Sebastian Bach”: 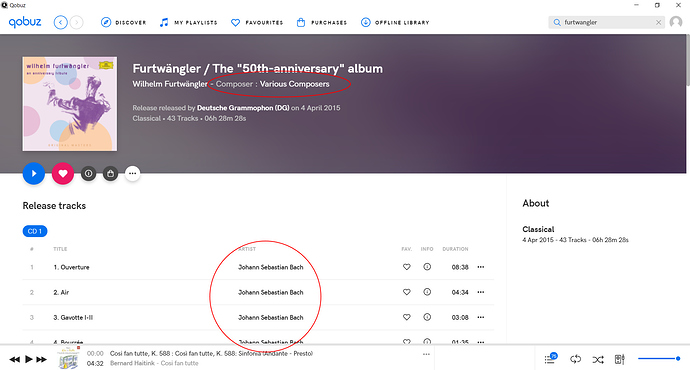 However from the same screen if you click on the little “i” icon you can get additional information: 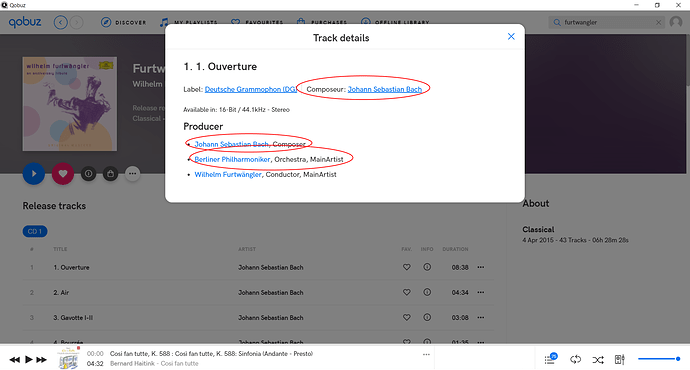 Here you can now see that Johann Sebastian Bach is both a “composer” and (French spelling) a “composeur”. Also Berliner Philharmoniker is both an orchestra and a MainArtist. None of this metadata however finds its way into roon when the album is added.

This is really common. Almost any album I try adding to roon misses all the metadata that is clearly there in Qobuz. Is there an issue with the way the mapping between the data models is being performed in roon/Qobuz integration?

This is really common. Almost any album I try adding to roon misses all the metadata that is clearly there in Qobuz. Is there an issue with the way the mapping between the data models is being performed in roon/Qobuz integration?

Yes, it is common, and others have reported examples. It seems to occur for two types of classical albums - older albums (new releases have much better and more complete metadata) and classical box sets that are reissues of older individual albums. @dylan - it really does seem to be a systemic issue, rather than simply poor metadata?

Just added this album to my library. Bizarrely, the last track is an aria from Tosca (thrown in as filler?) Qobuz tells you it is from Tosca; Room swears it’s still from Suor Angelica…

Yes, surely this is a systemic mapping error. It is just incomprehensible that Qobuz has no composer metadata at this level of frequency.