Picked up the Garth Brooks 13 CD box set at Target (on clearance for $20). Ripped all the CDs, but metadata seems to be missing for them. Any idea what I can do?

I tried a manual edit, which found the box set, but nothing synced up with the FLAC files as written by dbPoweramp.

Don’t know about the box, but I have twelve Brooks albums Roon has no trouble identifying. If Roon doesn’t identify the box, perhaps splitting it into separate cd’s is an option for you? It does have the advantage of a review per album

That’s the issue - They are indeed new separate albums (some are 2 CD sets), and nothing is found. This box set does not include any albums that were previously released individually.

It’s there for sure! The first result, in fact. If Roon doesn’t identify the box itself, try Edit > Identify Album > then type what I typed. That should do the trick. It does look like a 10 CD set though. Perhaps you have a limited edition? Anyway, that’s probably why Roon didn’t automatically identify it. Should be an easy fix. 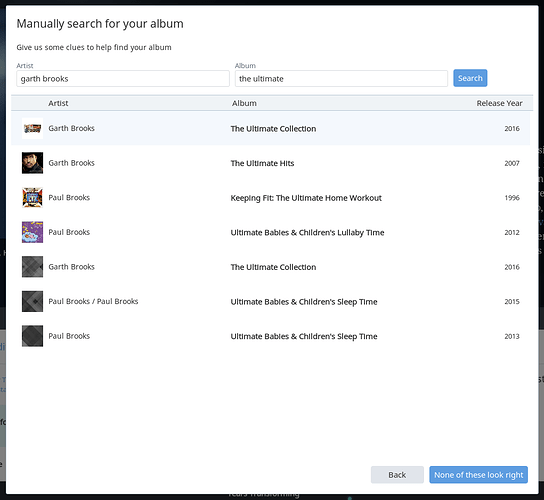 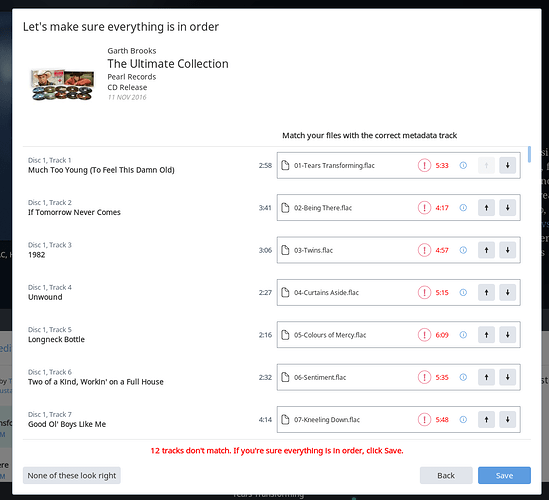 I tried a manual edit, which found the box set

Sorry, I now see I overlooked this in your first post. Not sure what happened while ripping your CD’s…?

dbPoweramp put them into individual folders (there are 7 “internal” albums, each of which had their own CD cover - three of which were 2 CD sets).

Once 1.3 rolls out, I’ll play with the metadata. It’s a really small price to pay for such a great product (Roon)!

Good luck with that, looking forward to getting started with 1.3 myself too!

Give this a read.

Is your set showing up in Roon as indivial albums and each shown as Unidentified? If so, you could select all of them and click Edit and then Merge albums. After merging, Roon may Identify the set automatically.

Since 1.3 is imminent, you may want to wait until after the update.