How to shufle only one genre? It look easy but it is not. When I choose one genre, for example to listen Country and made it shuffle, some album has country as genre but some are country and some other genre like country blues, folk, pop/rock(?) and somehow roon is going into that street and include music which is not country in playing?

Obviously I am not english speaking person and would like to add minor question about posibilites of longer period of opening vice sentences which I usually missed because that expired so fast. I like Roon and it is the best software for music as I know!

When you choose a genre to shuffle, if an album has the country genre, even if it has other genres, it will be included in the shuffle. So, a Garth Brooks album which hass both Country and Pop/Rock genres would be selected in the shuffle because it has the Country genre.

If instead you choose Roon Radio, then it may shift around in genres depending upon the originating track’s genre(s).

And the country genre has lots of sub-genres…
Roon gets its genre tree from Allmusic, and we see that it covers quite a few. 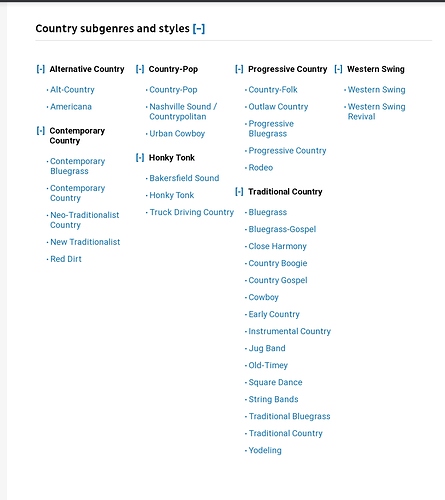 All of this I am aware, thanks. Problem it is in this, most of genres has so many subgenres. I think there is room for and why not have “main genre” and "subgenre in “edit album”. When we shufle “genre” it will be mainly main genre. Roon radio can use all.