I have been on the fence about streaming for many years, since my first spotify trials and then onto Tidal or even Wimp as it was back in the day. I’ve tested Deezer, Qobuz, Spotify andTidal, with the latter getting most of my $$ and time.

It’s not been a particularly good experience, I must say. Every time I’ve tried streaming on and off for a few months at a time, I’ve met issues, such as slow loading, buffering, albums with only a couple of tracks and lack of specific content.

The main gripes for me were slow loading, buffering and the part-album issue. Unless albums are complete then they just shouldn’t be there and cutouts or lack of playing when you want it to play are absolute deal breakers.

Now… onto the present day and last week I signed up yet again with Qobuz for a month free and am genuinely pleasantly surprised. It works!

No issues with cutouts or buffering, and I haven’t seen an incomplete album (yet).

I have a vast library of HDD located content and honestly I feel like a victim of Stockholm Syndrome for much of the time, as the work involved in curating, whilst I try to convince myself is a pleasure, is really annoying.

I am going to try to use the content on Qobuz ONLY for a month and if continues as pleasurably as it has been going for the past few days, I will seriously consider a life-change in my music listening habits.

No issues with cutouts or buffering, and I haven’t seen an incomplete album (yet).

I’ve seen a few incomplete albums on Qobuz, mostly iirc from the Harmonia Mundi label, and I think I had a couple of albums where tracks seem to have been withdrawn. You also get incomplete albums appearing when they haven’t been released. The album appears, with one or two sample tracks available, the rest unavailable till the official release date. But overall it is a negligible problem compared to the vastness of the catalogue. I do occasionally get “media is slow to load”. One thing you can do is use the Qobuz app itself to download a decent selection of music into your offline library. Although Roon can’t see this, you can so even if your internet fails completely you can still play music. Good for use on portable devices too.

Yes i spoke too soon… 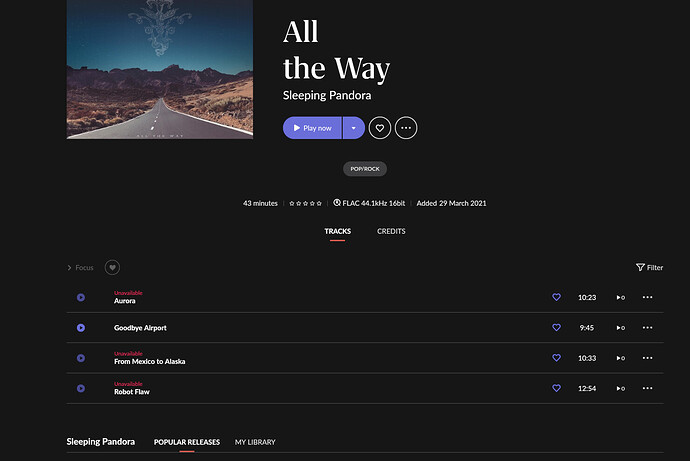 I really hate that.

Thanks for the offline tips. At the moment the consistency of play back is good enough not to need the offline play. Will see…

This i usually see when Qobuz has what I call a premature release!
I had this just last night where all 9 tracks said unavailable.
Then when I checked information on the album it said release date was the 9th April which explains why they are unavailable.
In general though I have been very happy with my Qobuz service both on wired and wireless internet service.

yeah, i hear you. The ones I have seen is from a relatively unknown, “bedroom” artist. Still It’s very annoying. They should highlight them as “incomplete” or “partial” or similar. Hey ho… it’s not Roon. They won’t listen, lol.

I really hate that.

Yep, that’s the kind of thing I mean. 1 track is streamable, the other you can download from Qobuz, but you need to pay. It’s only annoyed me the odd occasion tracks seem to have been withdrawn. I guess it is down to the artists and licensing.

Yeah i get that. Really annoying, at least in Roon we can tag them as being completely fugazi and avoid them.