Several people have been discussing where to get Hi Res material aka downloads. One of the hardest parts in shopping for Hi Res is the lack of information and the lack of the labels doing a careful job of creating the Hi Res material. Often, the best guidance on whether to purchase that 24.99 USD download is other users who have heard or own such files.

This thread is to create a list of Hi Res material that we think is good. I would like to suggest a limit of 1 suggestion per post with some description and not just a list of albums. That way, if others agree they can heart the suggestion to show their agreement that it is a good.

If someone says that they think Cat Steven’s Tea for the Tillerman is a good 24/96 download and you think the DSD64 version blow it away, feel free to add that information in a positive tone (or visa versa).

To Start Things Off:

I know, I know, it is the old chestnut everyone trots out next to pawnshop. But, the last remaster was very good and I find the detail stunning. If you have never heard this album before, well, you should. LOL. One in my personal list of “Top 100 albums you need to listen to before you expire”. 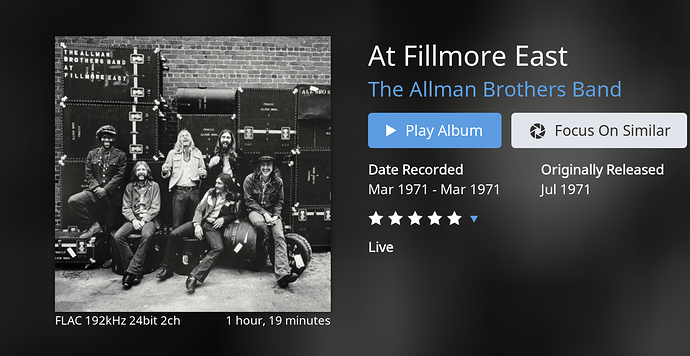 One of the all time classic Live recordings. Personally I believe the upgrade to higher resolution over 16/44 is worth it. Having wore the vinyl out several times, the CD release never measured up. This HiRes version brings me back to my old vinyl copies. Gone is the tinny sound that crashed on the loudest passages. Sound is clean on any volume now.

If you never heard the Allmans then this is the one album to start your collection with.

Rayski! Is that the newly released version (aka 2016) or the previous high res version. I have the previous version in 24/96 and it indeed sounds good. Have always been curious about the differences between the hi res releases.

I ‘believe’ it is the new release. For the longest time I could only find two version floating around for download, the 24/96 of the original album and a 24/192 of a deluxe set that included the material from all the shows they did on that run at the Filmore East. I didn’t want to pluck down the big bucks for the latter so I waited figuring if there existed 24/192 for the entire run then it was only a matter of time before the original came out in 24/192. I picked this up last month from ProStudioMasters.

Hello Daniel,
Rather than start off with an OT contribution, would a recommendation for a DVD 192/24 in AIFF (downloads not available from Soundkeeper Recordings) be welcomed? I ask because the quality of the recordings from SKR are excellent and one need only copy the files into one’s music library. Since I have already posed the question, I ought to finish with the actual title I am referring to, Equinox. Soundkeeper Recordings can be found online.

I think that Blu-Ray or DVD releases are fine to include in the same format, I would would tag that it is from a DVD and maybe add whether it is “in print” or not. ON that note, maybe I should edit the title and drop “downloads”.

If you’re a fan of Peter Gabriel’s So, the Society of Sound 24/48 remaster is superb.

Thank you for your reply. As I gathered in advance, it’s good to know the criterion is high quality SQ foremost whether in the format of a download or a disc that can be easily copied from disc to digital files. And “in print”, of course, is clearly relevant.

In my experience, the bit size and resolution is not determinative as I have recordings in 16 and 24 bits, 44.1 and 192 that are superb. So, too, DSD is not a guarantee of superb SQ either. How the recording is mic’d, and other recording practices can provide glorious SQ or one that is compromised, i.e., compressed, loud, “hot”.

I highly value those pre-recorderd albums one can assess immediately that have been produced by engineer/producers who understand what contributes to high SQ. I do understand that artists may insist on their preferences for what the SQ should be, i.e., Loudness. In those circumstances, the experiences is imposed on the listener despite the musicality and techniques which would otherwise distinguish the recording from those of lesser artistic quality.

Several of the binaural+ recordings made available by Chesky are well produced. I have neaerly 9000 albums all in digital format now and there are many that stand out as exceptional in sound.

Many times, changes to my system has resulted in revealing how much better the recording is than what I discerned before those changes. Hence my conclusion for the following:
Music’s the thing; the equipment seduces…

Very Good recording. The track “Krakow” is very open and I like using it as a system test with the spare percussion and trumpet. Inky black background and very sweet trumpet sound.

I have the 24/96 version from PSM. Nice. Hmmm. Maybe mine is the older version and yours is the newer if you picked it up last month. You’re saying 24/192 wasn’t available until then?

Yes I just picked up my 24/192 (Allmans Fillmore East) on August 2nd from ProStudioMasters. I had been looking for a replacement for my worn vinyl and was waiting for the 24/192 only because the Deluxe version was out for a while in 24/192.

This is an excellent recording regardless of format, however this version is stunning. The dynamic range is great, everything is so clear where the soft harmonies (ok maybe a little rambling on Do What You Like) to the bass and guitar work are all there. Bass and percussions are crisp. The sound stage is big. I think this is a big step up over the original 16/44 that I have - albeit an old one.

Sounds very very good. Was surprised at how clearly some of the background vocals on the title tracks came through. I had never noticed them before ™.
As a whole, some of the late 60s/early 70s soul and funk have been consistently very good.strong text

Weirdly enough, I actually have Moving Pictures in 24/192. Pono released it and then pulled it and re-posted 24/48.