Hegel - New firmware and how it's upsampling

I just received the firmware file from Hegel and immediately performed the update from the internal landing page of the amp. 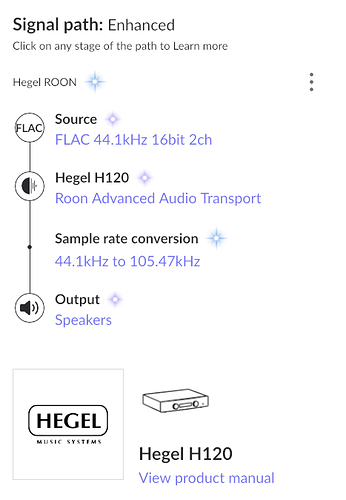 This (I think) also shows what @Anders_Ertzeid s talking about, because the amp upsamples to 105.47kHz. Is this the magic optimal frequency?

For first sonic impressions I played A walk across the rooftops by The Blue Nile: I have to do some thorough listening, but for now: a bit more spacious, a bit more snappy bass, a bit more dynamic. Nice!!

I’d assume as 96khz gets resampled twice for me. 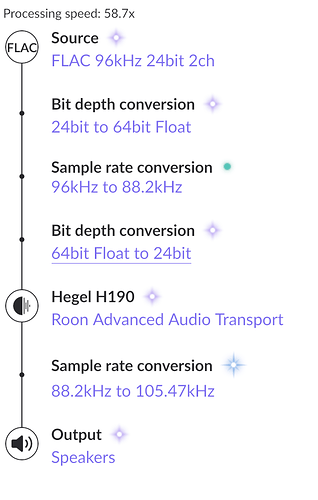 Whereas my rpi has none. @Peter_Struyk where did you see this magic frequency comment?

Glad it worked out!! 105.47kHz is the magic frequency for those amps, yes. 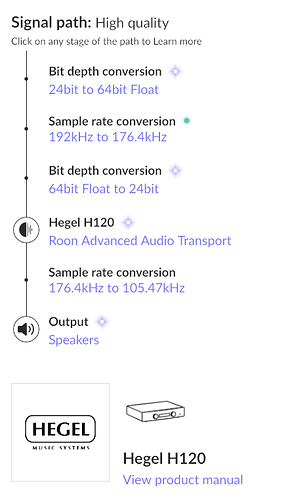 Why do you need Roon to do a first resampling of the track, just so that the amp can resample it again?

This is not the behaviour when using UPNP?

Over UPnP, the resampling is done in our module inside the amps. With Roon it is done by Roon itself, and that sounds quite a bit better.

Not sure why but thats irrelevant

Promising news. Thanks for reporting.

I’ve been doing some comparison listening today on my H120 & I think it sounds better than what I was using before, which really surprises me!
[Maybe we can all list what our previous ‘playback path’ was compared to new Roon Ready??]
I was using a Sonore UltraRendu with SBooster going in to a Chord Qutest DAC, hence my surprise

(I also compared to Stack Audio Link II with VOLT in to Qutest…)
Even on DSD64 tracks, I could hear each instrument more clearly and there was less ‘overhang’ from the other instruments playing, as well as lots of space in the soundstage
I might have a lot of kit going on to the For Sale section shortly

one of my favorite recordings to test a system!

one of my favorite recordings

After the planned encores… there was a standing ovation … then band came back on stage and said just for we’ll play another track or two but we’re not set up for it so give 5 mins to prep.

Yes definitely, I just upgrade the firmware on a H120 and noticed a considerable difference with H120 Roon Ready on some popular songs via Qobuz just now. I am hearing more bass, great midranges and highs on the Roon Ready H120.

I plan to compare H120 Roon Ready vs Innuos Zen Mini MK3 vs RPi AlloBoss2 as I have been experimenting with some work arounds while I waited on Hegel’s update. I must say I am really impressed thus far. I bought the Hegel with the expectation of Roon Ready so I have been waiting for a while.

Also, I did play the same song on a Mobile Fidelity Sound Lab Vinyl Original Master Recording. Not sure if it is my imagination but I felt that the analogue sound of the Hegel is different after the update. Presently, tha analogue input just sounds less bright and maybe a little muffled. I do not recall the vinyl version sounding this bad, especially a high grade vinyl production.

This is a very subjective observation; however it would be interesting to see if anyone has experienced something similar through other inputs on his/her H120 after the Roon Ready Update.

Bitperfect playback by Hegel!
May I ask for the reason for all these resampling?
I’m still waiting for update for H390
Thanks on advance Eda

Hegels POV is linked to in this very thread: