I Have been using ROCK for a little while now with fantastic results, but there is one thing that worries me, how do I use the User Interface to best effect? I have tried looking in the Roon Knowledge Base and can not see any reference to it, nor the use of the various buttons: 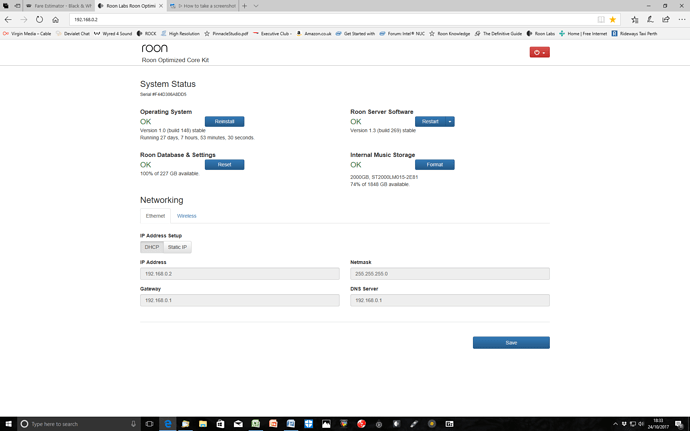 There is the red “off” button at the top right hand corner - would I use this if I wish to turn my NUC on or off, or do I use the power button on the NUC itself? I did use it to reboot on initial install of ROCK, but not too sure when else I would use it.

At present I leave ROCK running 24/7, but we will soon be going on an extended holiday and would probably like to turn it off whilst we are away - so do I use the Red button in the UI or the power switch on the NUC itself?

Then there are the 4 blue buttons in the body of the UI - ReInstal, Restart, Reset, and Format. Maybe it is a bit of a simpleton request, but it would be useful to me to just have a simple run down on what those buttons actually do, and when you would use them, and what for! Sorry if this has been answered before, or if there is an “idiots” guide already available (a pointer to this would be appreciated, if it exists).

Any guidance would be much appreciated.

The red power button has 2 options when you press it :-
Reboot - pressing this will restart the NUC. The Roon Server, Database, OS will be gracefully stop and the machine restarted.
Power Off - the Roon Server, Database and OS will be gracefully stopped, and a power off signal sent to the NUC. The power switch on the NUC itself isn’t like the old ones in computers that you pressed and they physically clicked on and off. This is electronic - so power off is more like your TV going into standby (in fact, much like a TV where you can press a button on the remote to power it up, you can do similar with the NUC if your BIOS is set for it). Short answer - the NUC is powered off from a software point of view, but if you are going away for an extended period of time you may want to unplug it.

As for the rest, ROCK is no different from any other computer. There are layers which are built upon each other and are dependent on each other.

So, starting with the layer that is most dependent - Internal Music Storage. This is the hard drive you have in your NUC that has your library on it. If you used external storage like USB, it doesn’t appear here. Only the internal hard drive storage. If you press format on that it formats the hard drive. Or to put it another way, say goodbye to your library. Music Storage only really makes sense if you have a Roon Server…

Next later Roon Server. The Internal Music Storage is dependant on the Server. You have 2 options with the Server. You can restart it, or you can stop it. Restart it will stop and then start it. Do this if you seem to be having hassles where your end points are losing connection to your Server, or your server seems to stop streaming to the end points (and it isn’t an end point problem). It is a bit like phoning support and them saying “have you restarted it”? A good first port of call if things aren’t working. Stopping the Server will stop it, but not start it. So if you stop it, don’t expect anthing to work unless you start it again. Why would you want to do this? You probably won’t. Generally you stop things because you want to do maintenance on them, or on things that they depend on. When Roon issues a new version of Roon Server it does this - stops the existing one, installs the new version, starts it again. Because ROCK is pretty much a closed system we aren’t changing things on it. So you probably won’t need to stop the server. But Restart is handy.

Roon Server requires a database to know where things are and how they relate to one another. So next layer away from you is the Database

Database. This is the database of the metadata that Roon uses to build relationships in your music. It doesn’t store your music itself, it stores references to it, the tags, and other metadata about it. The backup option that you have in the Roon UI settings is to back this up. You’d only really reset the database if it got corrupted. Reset will rebuild the database so Roon can read it again - but you’d lose all your metadata. Which is why you’d want to have a backup! Short answer - shouldn’t need to do this unless Roon suddenly tells you that you have 5000 tracks by Justin Bieber and all your album art is of cats. If so, good idea to reset it. Something probably went wrong. Probably. Once the database is reset, Roon should look at your library (the music storage) and start the process of rebuilding it. But you’ll lose any customisations (like tags) that you have done in Roon. So back up the database. I said you wouldn’t need to stop the Roon Server unless you did maintenance of something it relied on - resetting the database should stop the server and then start it again.

Finally the OS. This is the thing that lets all the software talk to the physical hardware. Memory, CPU, USB, HDMI, Hard Drive, Network… If your ROCK fails and you can’t restart the Roon Server - this is your last resort. Clicking this button will give you a shiny fresh new ROCK Server. New OS, new Database, new Roon Server. Great if nothing was working, but you’ve lost pretty much everything (you still have your music sitting on the hard drive though - it doesn’t format that).

So, things go wrong, sequence of trying things is

@anon73739233 Many thanks for this detailed and very helpful explanation of the UI functions - I am most grateful.

Yep. Databases can get corrupted. If you press play on any track and you get “Hit me baby one more time” it’s generally corrupted. It doesn’t happen too often - the database is on the solid state drive and which doesn’t have moving parts. Also the OS should take care of it pretty well. Truth is the ROCK UI doesn’t have any documentation because you generally aren’t going to use it. Maybe restart Roon Server. Maybe Restart the NUC. But once you have rock up and running you shouldn’t need to fiddle with things too much. It’s deliberarly been designed like that.

@anon73739233 yes you are right about ROCK being designed to be rugged. I do not intend to make a habit of playing with the UI functions - I am a firm believer of the “if it ain’t broke don’t fix it” rule, but I thought that it would be useful to at least understand what the buttons did “just in case”.