Hi and would this work for Core hosting?

£100 is a fair chunk given how much Roon costs in the first place!

As I say if ROCK won’t work then just Core on either W10 (I have a spare licence) or some flavour of Linux most certainly will so I have no worries about getting it running one way out the other.

And yes, I fully appreciate what is and isn’t supported - I tinker a lot. I hold a full amateur radio licence and also do astrophotography both of which require and awful lot of trying to get stuff to work on computers so don’t mind a bit of faffing to sort this

Nothing ventured and all that. It’s not like I’ve not got time on my hands at the moment!

Thats the spirit…live tech life on the bleeding edge!

As i mentioned above I do astrophotography which basically consists of standing outside on one of the three cloudless nights we get in the UK trying to get four or five bits of kit talking to each other that don’t want to ask while trying to gather 3 hours plus (and preferably 10+ hours) on a target you can’t see. Just aiming the telescope is tricky at first although there’s plenty of software to help.

Most of the time you’re just get a) cold and b) frustrated. Just occasionally it works and after spending another day or too with some niche software you end up with something like this.

Roon, MOCK etc will hopefully be a walk in the park in comparison. If nothing else it can be done indoors in the warm. Which reminds me. If I get this working I might invest in another mini pc of the same spec to run headless via rdp so it can be outside in the cold and I can be at my workstation :). 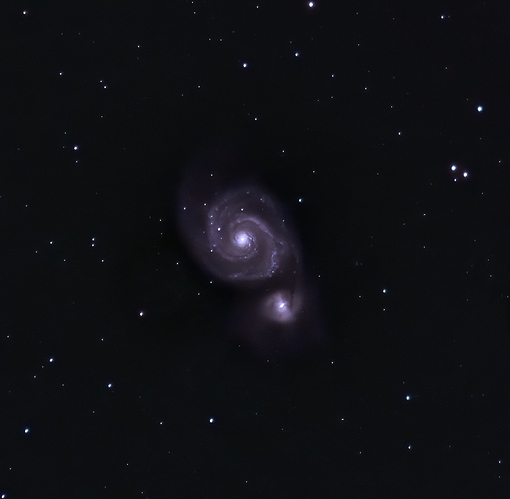 Which galaxies are they ?

Note there are much much better images of this but I am quite new to the hobby and as above it is more frustration and getting stuff wrong at first!

It’ll certainly work for now - I don’t have a vast amount of locally stored music.

Just thought I’d point out that if you’re also going to subscribe to Tidal and/or Qobuz, then any albums from these streaming services that you add to your library will also count towards impacting system performance. That’s because the information about the albums ends up in the Roon database - and this beast requires an SSD (which I see you have) for best results.

Yes have been reading up and didn’t appreciate at first that the streamed albums get added to the database also.

I’ve since specced a Ryzen 3 3200G and an m.2 SSD which should be enough grunt with the Ryzen 3 performing slightly higher than the i3 8100.

Whether it will MOCK remains to be seen.Should all arrive tomorrow so I’ll post my findings in tinkers corner :).

Having been sold on Roon within a couple of days of trying it I needed to do my bit for the planet and build a low power mini PC to run it on. Being an AMD fan I specced up a Ryzen 3 3200G setup from Amazon for a few pence over £320 and was going to just run Roon Server headless over W10 or some Linux distro but having read about ROCK thought I’d at least give it a go. What can I say. In a way I wish I could write a dozen paragraphs about all the clever little tweaks etc I had to make in orde…