When using the HiFi Berry AMP+ with Roon Bridge (1.0 build 34 and Roon 1.2 build 157) i can’t get the hardware volume to work. When selecting “Use Device Controls” it says “Volume control is Fixed”.

Could it be because the AMP+ doesn’t have a hardware mute-option?

See the attached screenshot for my alsamixer. 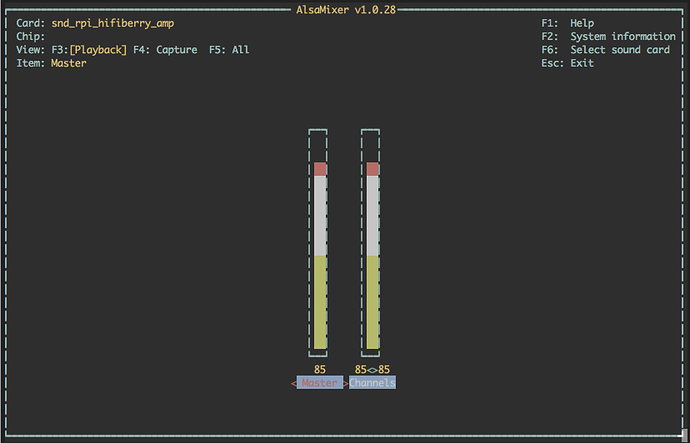 According to this post Roon uses “the first volume + mute controls it can find on the device”.

(I haven’t made myself clear in my previous post. Sorry about that).

Yeah, I think that’s why we don’t pick it up.

We’ve seen a few devices that separate vol/mute controls, but this is the first that has no mute controls at all…I wonder why they did that (and if it was deliberate or accidental).

We’re going to try to get our hands on an AMP+ to play with this. Maybe we can do some faking of mute functionality in cases where it’s not available.

From what i’ve read on their forum the chip they are using has no mute function (Texas Instruments TAS5713).

I’ve created a softvol in ALSA with “resolution 2” called “Mute” and now i can use the hardware volume control from Roon.

Created the ~/.asoundrc file for the softvol as described here.

In .asoundrc i added the following:

Well, at least Roon Bridge uses the hardware volume controls now, but this creates a mute button that doesn’t work.

Maybe someone on the forum knows what will make the mute button work?

Definitely caused by my lack of understanding of ALSA…

Changed the ~/.asoundrc file to the following, and now speaker-test is working, but still no mute functionality.

Going to ask the mute button question at the HiFi Berry forum.

We got our hands on an AMP+. The next release of Roon will support volume control–but not mute–on this device.

If we start running into more of these situations, we might consider doing a soft mute control. If it’s just this one strange driver, then it will probably remain as-is.

I don’t mind mute that much… you slide it down all the way… muted.

But it has a strange logarithmic curve. Still silent at 50, too loud at 75.
Can that be remedied somehow?

The volume scale is determined by the device + driver, unfortunately. As far as I know, what you see in Roon should directly correspond to what you can see in alsamixer. We don’t have any settings for re-writing the volume scale.

On my HiFi Berry AMP+ the volume is working fine (i believe linear) and not at all how you describe it. Both with the Volumio 2 image and a basic Raspbian Jessie Lite installation.