How Big Is Your Library

That is one lot of unidentified albums, I assume that is reeking havoc with your composition view in Classical stuff.

Also another High Proportion Classical library, how do you navigate to specific albums in this situation. Have you seen the issues mentioned above

The multiple parts of the Messiah is a case in point , they should all be bulked as a “Messiah” so that you can see all recordings of that work in the composition view.

Yes. I often do the same thing with some simple pattern matching in mp3tag. I think Klaus uses JRiver. I see Yate mentioned a lot by Mac users.

I must say, I only fix things on a case by case basis. I tried batch converts a few times but it was a mess. So I usually keep a mental note of whatever I keep going back to in JRiver or the wife’s favorites and focus on them. I would really like some easy way of “focusing” on unidentified compositions so I could be a bit more systematic. I cannot see how to do that.

I do experience the same issues. Composition data is not consistent among my identified albums. I was not too much surprised by that, though. I had expected inconsistencies to happen. The fun starts when you try to correct those.

As another example: over the christmas period I played around with the prefer Roon vs prefer File settings and my experience was very mixed.
When selecting “prefer file” in the global library settings for compositions I’d expected Roon to just take my Work and Part tags. What I got was a mix of “mapped” compositions vs. “tagged” ones. It was easy to see, since I have maintained my work tags in german. So my guess is that Roon still applies logic even if the settings are to prefer file information.

I think the interaction between what is in my my file tags and what Roon does with it together with the metadata it gets from other sources should be better documented. For me it worked in 80% of the cases but not in all and mostly I have no clue what I could have done to get it right…

I just spotted one thing of interest , if you try to merge the Composer Name, Composition Start and Enmd dates must match or they wont merge

Please join in the clamour for better classical coverage , I supect you are one of the biggest Classical libraries we have seen so far.

Yes. I would have thought most larger libraries have a lot of box sets. It’s the only way of doing it. For me they tend to be the bedrock of the library where most of the “reference” recordings from the 80’s are when the “superstars” of the day were recording the entire Classical repertoire to CD. I have older stuff, vinyl rips and much newer high rez stuff. But those box sets are the bedrock from which to explore the library.

I listen to a lot of other stuff as well, where I would really like better visibility at a composition level. I am not finding this to be an issue only with Classical. I forgot to mention that on my home roon I have a lot of Vocal Jazz and American Songbook and the most performances I have is 40+ “Stardust”, Hoagy Carmichael. But that is only because that song was important to me and I hunted down everything I could find in my library to populate the composer field. Unpopulated Composer fields is much more common with Pop/Jazz and I just have no idea how I would systematically go about populating all of that. So I just do it randomly on a case by case basis with songs that have a special meaning. At the end of the day I much prefer to listen to what I’ve got but if there was any way of improving hit rates with Composers/Compositions that doesn’t mean tagging hell I am all ears.

As another example: over the christmas period I played around with the prefer Roon vs prefer File settings and my experience was very mixed.

When selecting “prefer file” in the global library settings for compositions I’d expected Roon to just take my Work and Part tags. What I got was a mix of “mapped” compositions vs. “tagged” ones. It was easy to see, since I have maintained my work tags in german. So my guess is that Roon still applies logic even if the settings are to prefer file information.

When Roon identifies an album which has one or more multi-part compositions, the Roon metadata for the composition parts are displayed, not the track titles. This is as designed and is not a bug: your track titles are not being displayed, because Roon isn’t displaying track titles… If you really want, you can (on an album by album basis, or using multi-album selection) choose additional options for preferring file metadata. Multi-Part Composition Grouping would be the one of relevance here. …

I do agree that the whole process could do with some better documentation in the knowledge base, something that’s been said often in the past.

We’re probably getting a bit off-topic here, so perhaps one of the moderators can extract this discussion into a separate thread.

Agreed. Should be split out. There is a very interesting exchange going on here with experiences of “composition” or maybe it’s technically “performance” identification vs. “album” identification.

But, I also see it with a smaller Classical library where in many ways the effects are more serious. I also see it in a Vocal Jazz / American Song book library where similar to Classical it is fun to explore interpretations of the standards. I wounder if it’s common in other libraries but no one is looking? Maybe the librarians tend to gravitate to certain genres and that is why it is being noticed in certain genres first.

@Bendix_Christians. That is an interesting observation.

The mods are probably going to split out this discussion on composition identification but do you have a few screen-shots to clarify?

Just so I understand do you mean the dates below? The ones we cannot edit or do they map to anything in our tags? 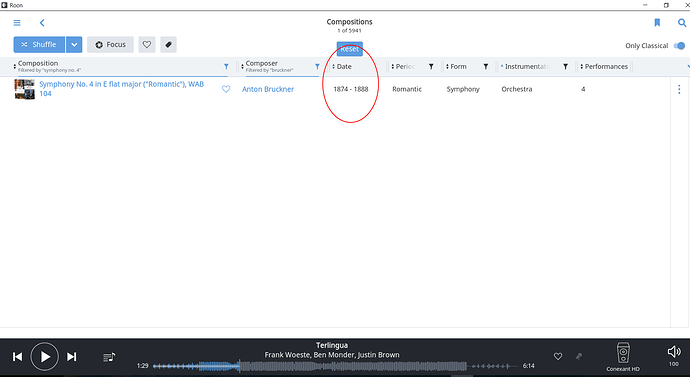 Yes, I had a Composition with 2 discrepancies

I manually adjusted the one with no dates and voila

How did you change the dates?

I have mainly problems merging compositions…

can’t get my Boleros to merge, but both compositions will lead to an identical looking composition page… but neither of those pages contains the Bolero from the Dutoit recording, which is displayed in the second composition entry… 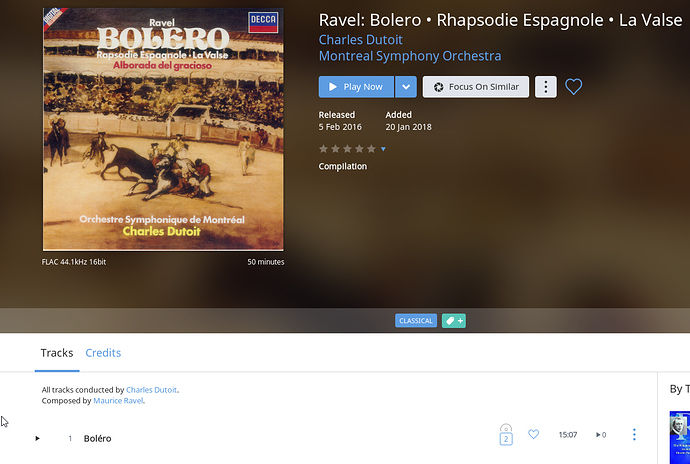 when trying to merge those compositions I see this… 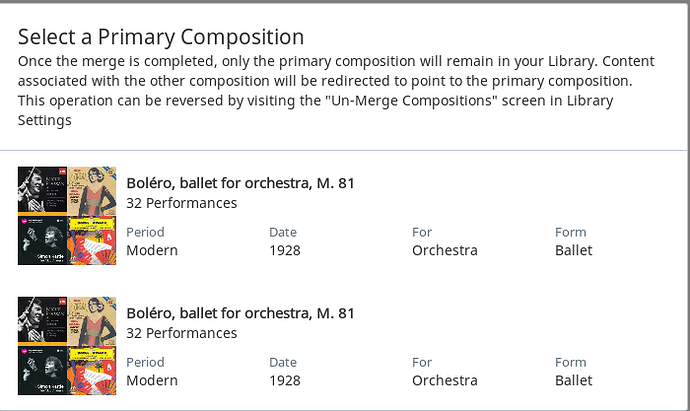 It only gets worse when I check Jriver and see that I have 35 recordings of the Bolero, not 32+2 as Roon would indicate… So I guess I also need to indentify the prodigal son…

But we are already off-topic - sorry

There were 2 sets I highlighted the one and went edit

I get exactly that. Very common.

Sometimes I am able to get it to work by unmerging everything and then trying to merge them back in a different order one by one. If I get to this “blocking” point I just unmerge everything and start again. My approach is entirely random. I don’t have the patience to go through the permutations. Sometimes I get lucky sometimes I don’t and I give up and try another day. I assume roon auto-merged at least some of it so the bright-side is the perms must be less than 32 factorial

It’s in the “Composition Editor”. If you highlight the composition and press the Edit box at the top you get there. This is a very good example of what @Klaus_Kammerer1 has been banging on about that the natural “cockpit” for a much improved roon Classical experience is the composition screen. Just needs a few things fixing: 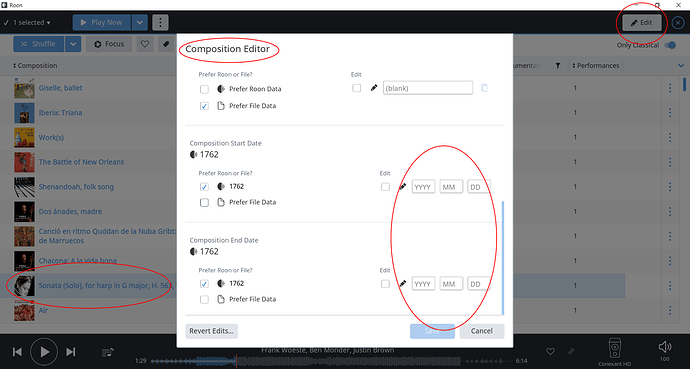 PS: As long as the composition is there in the first place that is

Just managed to use the “date” trick to merge an unidentified composition into an identified one.

But I am working on a much smaller library, so on exactly the same disk I have a singleton composition I cannot merge into anything. So it remains stubbornly unidentified even after the usual tricks of tracking down the allmusic format, opus no’s etc.

Sounding a bit like the aggrieved classical users club

Worst part is we don’t know what the set is

The worst part of all is that it takes another library software product to see if you are missing any, I certainly couldn’t tell at a glance if I was missing one of 35 !!, let alone the guy with 130 Beethoven 5ths

In JRiver I added Composition and then looked from Composition for a selected group of Composers and then corrected. Equally you can see where 2 composition texts are slightly different and fix it easily.

I suspect Roon doesn’t look at any Composition tags just at the composition from its metadata source. Maybe that’s a request too

Have you looked at Jaikoz or Song Kong

Jaikoz analyse the song timings and lookup in MusicBrainz, the free version will do 20 tracks as a try out

Its rescued to odd outlier for me

Have you looked at Jaikoz or Song Kong

Jaikoz analyse the song timings and lookup in MusicBrainz, the free version will do 20 tracks as a try out

Its rescued to odd outlier for me

be careful when using Jaikoz and Song Kong when using the “prefer tags” option in Roon. It puts data in artists and performer fields that clutter Roon, because their source (Musicbrainz) often gives artists and performers with their instrument or voice in brackets. I tried to do that in the past and it made a mess out of my artist list in Roon.

I think you can control though what tag fields will be updated by Jaikoz - just be aware that it may popuate tags that Roon can read but you never thought about… For me it was the performer tag… Had to clean up my tags afterwards.

Hi Joel , not sure if you have been following this thread ?

A technical query,just for interest does Roon have all the elements of a Composition Text stored separately such a

Or is it a lookup from an external DB , AllMusic etc